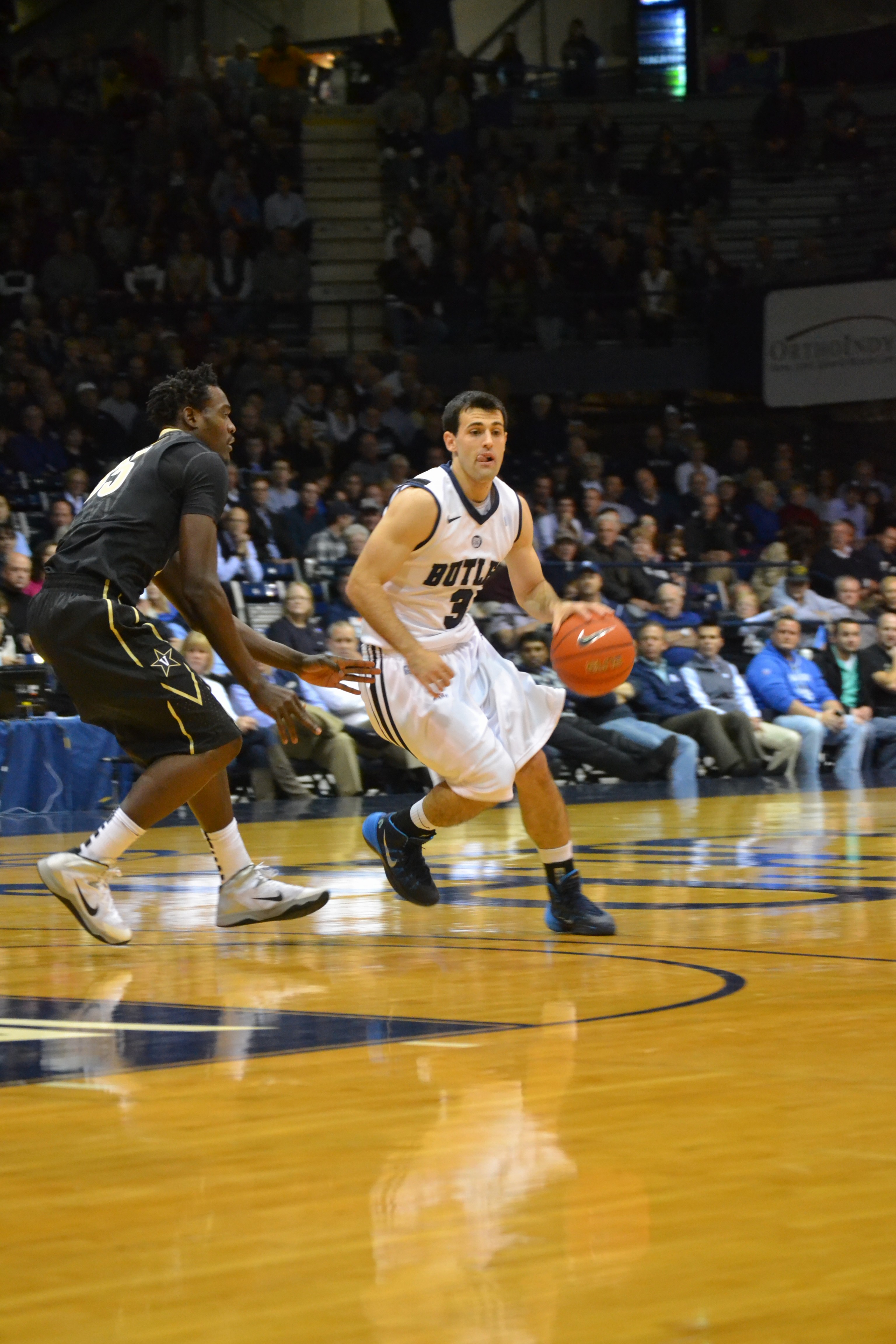 The recent changes in the men’s basketball program have been well documented. Players have come and gone, coaching positions shuffled, and Hinkle revamped. Even the troughs in the men’s restrooms have been replaced.

Nevertheless, a new basketball season is here, and there are games to be played.

Despite the loss of Erik Fromm and Khyle Marshall to graduation, this year’s team does not lack seasoned veterans.

Alex Barlow, Kameron Woods and Jackson Alridge bolster the senior class. Woods led the team with 9.0 rebounds per game last season. Barlow started in all 31 of the team’s games last season, while leading the Bulldogs in assists and steals.

Woods said he is focused on enjoying the ride, not looking at the end.

“I’m just having fun enjoying my time playing with these guys,” he said. “I think if you think too much about the end, you don’t have time to sit back and enjoy your last time playing.”

He said he has aspirations of playing beyond this year, but trusts the coaching staff to make the right decisions.

Dunham averaged nearly 14 shots per game last season. He said he hopes to utilize the players around him more effectively this year.

“I think we have a few more guys who can put the ball in the hole this year, so I’m going to accept my responsibility maybe distributing more than I did last year and taking a few less bad shots at the end of the shot clock.”

“I don’t think any of our guys should be playing 35 minutes a night,” he said. “We did that last year because we had to do that. We’re still not as deep as we need to be, but we’re getting there. In a perfect world, if you have your primary guys playing 26 to 32 minutes, that’s a really nice place to have a lot of guys.”

Redshirt junior Roosevelt Jones returns to the floor after missing last season with a wrist injury. Jones led the team in assists during the 2012-2013 season, finished second in rebounds and third in points. But more importantly, Jones said he brings energy to the floor.

“I think I bring toughness to the team,” he said. I feel like if we need a big stop, I can go out there and get that one stop. If we need to score, I feel like I can put the team in a good position to get the score. If we need that last rebound, I think I can help the team get that.”

Andrew Chrabascz returns as a sophomore. Chrabascz saw increased minutes as the season wore on, and he hopes to continue to develop this year.

“I just want to contribute as much as I can to the team and help us win as much as possible,” he said. “That means leadership on and off the court. I’m trying to help the team mature, and every day is a process.”

Trey Pettus may be a new face to Bulldog fans, but the sophomore walk-on has a resume that speaks for itself. Pettus was the leading scorer for Butler’s club basketball team last season. He was named  All-Conference and All-District at Mary Institute and Saint Louis Country Day School during his senior season, averaging nearly 15 points per game.

Wideman averaged seven rebounds per game as a senior while netting 16 points per contest.

Last season, Butler tore through its non-conference slate with a 10-2 record. Repeating that success this season will likely prove to be a much more difficult task.

After hosting a pair of home games to start the season, Butler will travel to the Bahamas for the Battle 4 Atlantis tournament. The Bulldogs will face North Carolina in the first round. A win would mean a date with the winner of UCLA and Georgetown University. A loss means a matchup with the loser.

After returning from the Bahamas, Butler will travel to Indiana State before returning home to face Northwestern. Matchups with Indiana and Tennessee await before Christmas Break.

Holtmann said he hopes the team’s rigorous non-conference slate will benefit the team when conference play begins at Villanova on New Year’s Eve.

“If we handle it right, the rigors of that schedule should prepare us for a better Big East,” he said. “I think it would rank up there as one of the more difficult schedules in terms of the schedules we’ve played.

He said the team will experience ups and downs. What will matter is how well the team stays together.

“For our team, are we going to stay together through the ups and downs of a season? They’re coming,” he said. “For us to not expect that is naïve. If we stay together, I think good things can happen.”

Butler was picked to finish ninth in the Big East last season. The prediction proved to hold true.

This year, the team is picked to finish seventh.

Woods said the rankings do nothing but provide motivation.

“I didn’t go in there thinking we’d be picked high,” he said. I never walk into places expecting people think the most of us. I think for a lot of us, it gives us a little bit of motivation. It gives us something to work harder for, and I know being picked seventh has excited a lot of guys.”

Holtmann said the team knows where it stands, and rankings only improve through the results on the floor.

“Our guys know that people know our team and our program,” he said. “That’s where they put us right now. Until we prove otherwise on game night, we can talk about it all we want, but the reality is that our job is to do today as well as we can do it.”