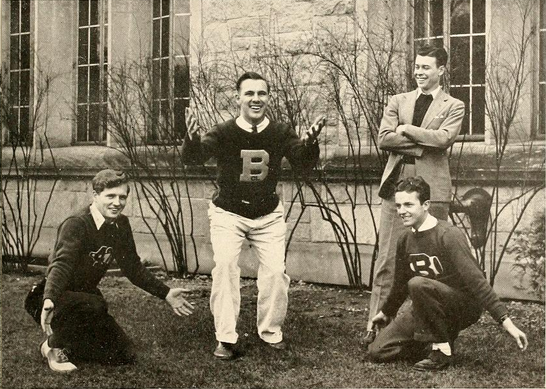 The image of Homecoming morning at Butler University has evolved into something distinct.

Cars pull into the parking lot near the Butler Bowl early in the morning. Bulldogs from the past and present unpack their families, their food and their fun. Cheers from the chariot races carry across campus. Alumni reunite over drinks before noon, reminiscing about their school days. Soon, the road is filled with floats for the parade. Kickoff is soon approaching.

The event dates back almost 100 years, and some of its traditions have come and gone. The activity culminated in a football game, but Homecoming began to grow in other activities as the years passed.

Butler’s first Homecoming was on Oct. 23, 1920, on Butler’s former Irvington campus, located in what is now the Irvington Historic District.

Class was dismissed at 10 a.m. on the day of Homecoming, and students went to a pep meeting in the school chapel, according to the 1921 edition of The Drift, Butler’s yearbook.

The yearbook entry said peace doves were let out of a cage to take news of the game back east for the Quaker fans who stayed home.

There was a “big pow-wow,” and people had “plenty of pep for progressive dances” later that night, according to the 1921 Drift.

Photo from 1940 edition of The Drift

In 1939, Homecoming still included a school dance and a pep assembly for all students to attend.

A bonfire was added to the festivities, according to the 1940 edition of the Drift.

The sophomore and freshman classes physically battled in a hand-to-hand fight. The Sphinx Club, a group dedicated to preserving Butler’s precedent, refereed the fight.

The sophomores won, and retained their control over the freshmen.

The Greek houses competed in the contests, which they had been doing since the early 1920s. Alpha Chi Omega and Sigma Nu won the float contest, and Pi Beta Phi and Lambda Chi Alpha took home top prizes for lawn decorations.

1939 was also the first year the Butler Independent Association entered a float for the parade.

Lawn decorations during Homecoming week.
Photo from 1965 edition of The Drift

In 1964, the Homecoming theme was the Roaring Twenties. Lawns and floats reflected an age of glitz and glam. The slogan was “Flappers, Flivvers and Fairview.”

Blue Key and Scarlet Quill again hosted the activities. The men of Kappa Sigma fraternity won the lawn decoration contest with their spin on the St. Valentine’s Day Massacre.

The Sphinx Club hosted the freshmen greased-pole fight and the tug-of-war. They also sponsored a junior-senior pie throw.

Students cheering at a Homecoming event.
Photo from 1990 edition of The Drift

The 90s brought more changes to Homecoming, and it looks more similar to our current week of events. The Student Government Association now planned the programming.

Freshman skits took place during Homecoming week. There was a regatta event, where duos raced rafts down the canal.

The traditional chariot race between Sigma Chi and Phi Delta Theta happened on the morning of the game. Sigma Chi was victorious.

The Bulldogs beat the Valparaiso Crusaders 31-0. During halftime, the band performed and the queen was announced.

The festivities ended with the dance at the Marrot Temple.

Some new traditions have been added to the schedule during Homecoming week.

The SGA still sponsors the various events, such as lawn decorating and the parade.

Yell Like Hell, the skit competition, has replaced other similar events.

Residence halls and Greek houses are now paired for activities, as opposed to each organization working solely for itself.

Men can now compete for the title of Homecoming king, alongside queen contestants.

Bulldogs of all shapes and sizes flock to campus for the Bulldog Beauty Contest.

The Sigma Chi chariot races include all fraternities on campus.

Homecoming continues to be a time of year when current students and alumni gather on campus to celebrate being at Butler University.