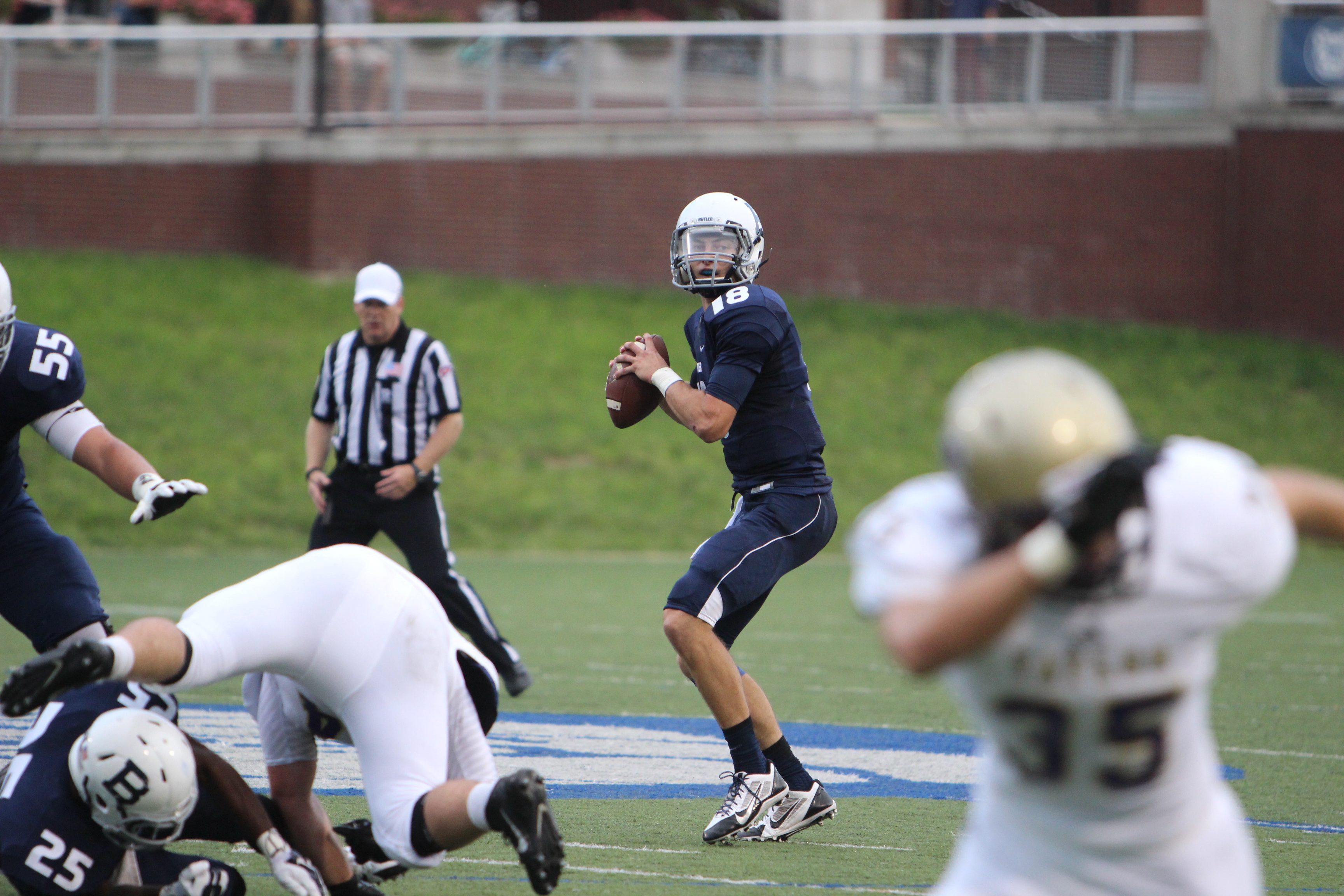 After a tough loss to Indiana State last weekend, sophomore running back Trae Heeter and the Butler football team got back on track with a 23-6 win against Taylor Saturday.

Heeter led the Bulldogs (2-1) and their powerful offensive attack, which racked up 475 yards in Butler’s first ever visit to Taylor.

Heeter, who was named the Pioneer Football League’s Offensive Player of the Week, was responsible for 155 of the Bulldogs’ 225 rushing yards and a touchdown. He also added three receptions for 59 yards and another score.

“Heeter had a really good day,” head coach Jeff Voris said. “The offensive line played very well in opening things up, and he did a nice job of running to daylight.”

Senior quarterback Andrew Huck continued his impressive  season with another banner day in the air and on the ground against the Trojans (2-1).

He threw for 250 yards and one touchdown and added 36 yards on the ground, including a 29-yard touchdown run.

“We came out of the gate a little slow, but we were able to get going,” Huck said. “He [Heeter] made people miss in the second level.”

On the receiving end of 85 of Huck’s passing yards, including a 38-yard connection, was senior wide receiver Jordan Koopman.

“Our offense was going pretty well, and Huck was throwing great balls,” Koopman said. “It really wasn’t hard. We just had to get open for him.”

Koopman and fellow senior Zach Watkins tied for the team lead with seven catches each.

With those seven receptions, Watkins became Butler’s all-time career leader in receptions, with 197. The previous record holder, Dan Bohrer, finished his career with 192 from 2006 to 2009.

Watkins also made the move into second place on Butler’s list for most career receiving yards with 2,217. He will again have to catch Bohrer, who recorded 2,241 receiving yards, if he wants the title for himself.

While the Butler offense was successful, the Bulldogs’ defense led the charge and shut down the Trojans for most of the day.

Led by junior linebacker Jordan Ridley and sophomore defensive back Jayme Szafranski, the defense forced three turnovers and held Taylor to 288 yards of total offense, including a mere 17 yards rushing.

“The story of the game really was the job our defense did early on and really all game,” Voris said. “Our guys were put in some tough situations, and they really played well to keep Taylor off the board.”

Taylor received the opening kickoff and drove down the field to the Bulldogs’ 14-yard line before Ridley came up with an interception of Taylor’s sophomore quarterback Nick Freeman.

The Trojans’ second drive of the game ended the same way, with Freeman throwing an interception deep in Butler territory. This time Szafranski made the pick and returned it 24 yards.

After a Butler miscue on a punt in the second half, Taylor had perhaps its best scoring opportunity of the game, with the ball on the Butler 6-yard line.

The Bulldogs kept the Trojans out of the end zone on that drive, as well as several others.

“That was just an awesome stand,” Voris said.

The Bulldogs will be at the Butler Bowl this weekend to open Pioneer Football League play. They host the Drake Bulldogs on Saturday at noon.