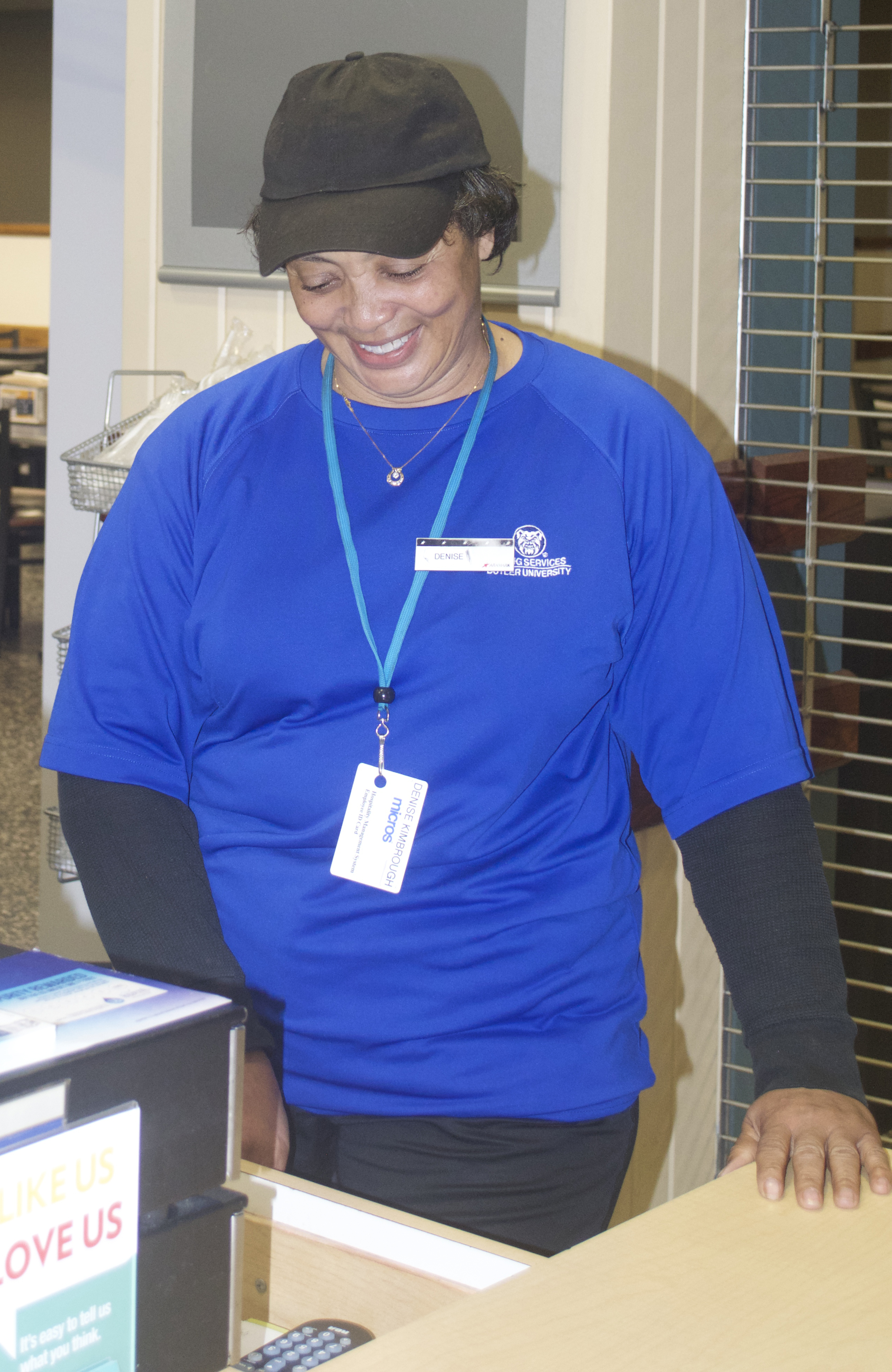 Warm, friendly, loved — these are some of the words students have used to describe Denise Kimbrough, a former dining services employee at Butler. During her nine years at the university, Kimbrough, better known on campus as Ms. Denise, often brightened students’ days with her positive attitude, words of wisdom and hugs. After moving on from her role due to changes caused by the COVID-19 pandemic, Kimbrough looked back fondly on her time at the school.

Bon Appètit employees like Kimbrough went into spring break in March just like students did: uncertain about the severity and duration of the pandemic, which was just finding its footing in the United States. When employees were eventually set to return later in the spring, Kimbrough said they were only going to start off with about 18 hours a week. As someone who normally worked 40 hours, this would not have been enough for her.

Kimbrough landed at Butler after working for 32 years at the family business her father had run. When her father and brother got sick at the same time, she left the family business behind to take care of them for a year. After taking that time off, Kimbrough needed a job. As she lived just five doors down from Butler, Kimbrough decided to walk over and see if the university was hiring.

“I went up there on a Thursday, got an interview and started work that Monday and it’s been hallelujah ever since,” Kimbrough said.

Kimbrough said her favorite part about her time at Butler was the students. When first-year students came down to the C-Club where she worked, she could tell if they were shy or scared about being away from home. If a student was struggling with something, Kimbrough would talk to them. If she saw a student in tears about a test they did poorly on, she would encourage them.

“When I did that, they would run back down here and just say ‘Ms. Denise, I passed the test’ or whatever and it made me happy,” Kimbrough said. “I just like helping.”

“She was very warm,” Margulis said. “I felt like I could feel her presence from a mile away.”

Margulis said transition periods like starting college can often be very stressful and people like Kimbrough can act as a safety net and source of stability. Although she primarily worked as a cashier at C-Club, Margulis said she thought Kimbrough took on many roles for students.

“She did have her role in C-Club and in ResCo, but to me she embodied so many roles,” Margulis said. “She definitely had a maternal aspect to her; she was also a friend and a therapist in some ways.”

Senior theater major Kelly Schwantes had seen Kimbrough at C-Club since her first year at Butler as well. She said she will miss Kimbrough’s positive energy.

Shwantes said Kimbrough would know if someone was upset even if they didn’t know it themselves. When she sensed it, she knew what to say to cheer them up and help them to get through whatever they were going through.

Kimbrough was also able to help students with Spring Skits, a dance competition event put on every year by Butler’s Blue Key Society. As a judge for two years in a row, she was able to participate in the annual event and also get a sense of how much the students appreciated her as well.

“I was a judge, you know, when they have the little skits right around April, I mean, I walked into the gym, and they mentioned my name, you would think I was Beyonce,” Kimbrough said.

During her time at Butler, Kimbrough witnessed the transition from Aramark to Butler’s new dining provider, Bon Appétit. Kimbrough said it was a sad day when Aramark left, but that she thought Bon Appétit was a good company as well. However, one change that she questioned was the move from C-Club to Plum Market. She thought students liked C-Club and found the food in Plum Market to be overpriced.

“Their thing was money, money, money, it wasn’t what the students want,” Kimbrough said. “I think they had a pound of butter that was $19. Yeah, it was plant-based, but if the kids use their Dawg Bucks to buy all this stuff, within two months they wouldn’t have any more money to last them to the next semester.”

Since leaving Butler, Kimbrough has started working at Costco. She said she is still able to do what she enjoys there, working with and helping other people. Additionally, Kimbrough said she is able to get higher pay and good benefits, which are helpful with her current health issues.

After getting an annual mammogram in late August, Kimbrough was diagnosed with breast cancer. She is currently taking a pill to shrink the cancer and expects to undergo surgery towards the beginning of next year. The cancer was detected early and, staying true to her character, she still finds a way to have some positivity in the situation.

“I was upset, but you know, I just put it in God’s hands because God don’t make mistakes,” Kimbrough said.

Now, at 60 years old, Kimbrough is hoping to retire in the next three years.

“I’ve been working ever since I was 15, so 45 years is long enough and I’m getting to be a little bit tired,” Kimbrough said.

In the meantime, Kimbrough said she hopes to come back and visit Butler sometime when she can navigate the COVID-19 restrictions. Despite seeing some people from the Butler community at Costco, she said she still would like to see Butler students on campus again.

“I do miss you guys, I really really do,” Kimbrough said.