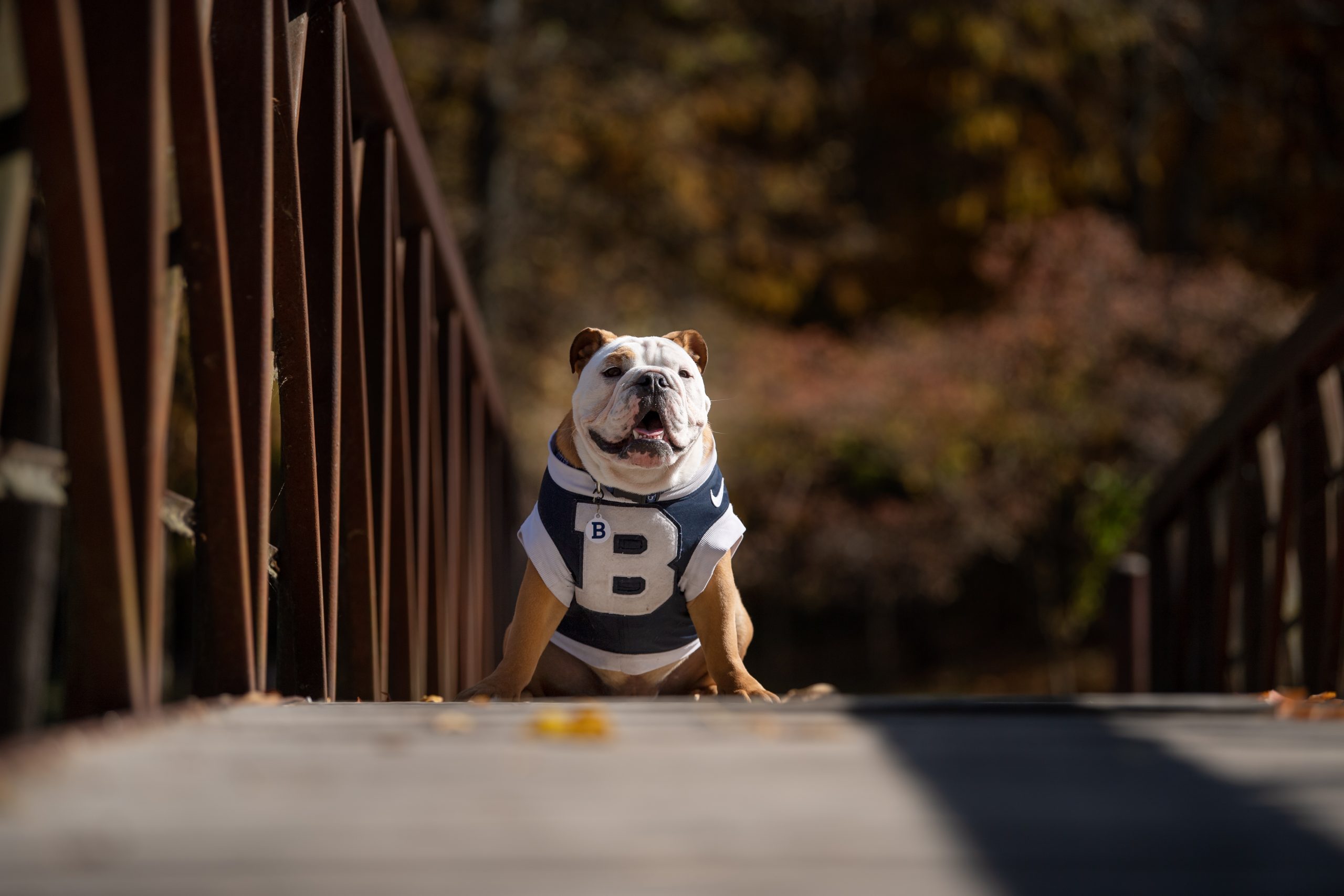 On Jan. 22, 2020, just over one year ago, Butler Blue IV was introduced to the Butler community as the new university mascot. At that time, Blue was only 13 weeks old, and had been brought home by his handler, Evan Krauss, less than one week before.

Since that time, Blue has grown from a tiny, wrinkly puppy into a full-grown dog — and a much-loved mascot.

Evan Krauss, Blue’s “dad,” is a senior marketing manager at Butler. Looking back on the past year, Krauss described bringing the English bulldog home as “a dream come true.”

“Being able to experience Blue’s growth from being that 16-pound fluffball that I held up to the crowd to every week… and just starting to nail his responsibilities and loving it just, you find yourself being really proud of him,” Krauss said. “He’s 15 months old and he’s doing stuff that three-year-old dogs sometimes struggle with, so that’s the biggest takeaway is that I’m just proud of his progress.”

For students, the opportunity to be at Butler when a new mascot was debuted was a unique one; Trip became Butler’s mascot in 2013, serving as the live mascot for eight years. Many students said they were sad to hear that Trip would be retiring, but at the same time, the prospect of having a puppy on campus was exciting.

Amy Essig, a sophomore communication sciences and disorders major, said that when Blue was introduced to Butler last January, the energy on campus was “electric.”

“There’s a limited number of classes where they’re gonna be at Butler like during the transition period [between mascots],” Essig said. “And so I just felt really lucky that it worked out like that for us.”

However, just weeks after Blue began to train as the new mascot, classes moved online as the COVID-19 pandemic swept through the United States. For any puppy, shifting to an isolated environment would have been challenging. For a mascot-in-training, however, COVID-19 was a significant roadblock.

“We shut down basically everything for a while, in terms of appearances, being out in public, because we didn’t know what was happening,” Krauss said. “We didn’t know how [COVID-19] affected dogs, how it affected humans. And then for the training’s sake… it felt like we were going down the highway and pulled the brake.”

To make sure that Blue did not fall behind in his mascot training, Krauss said they made sure the puppy was “working his brain” by doing things such as practicing his tricks, including sits and high-fives, as well as playing with mental-cognitive toys, specifically ones where Blue had to work to get a treat. However, it was important that Blue continued to stay in touch with the Butler community, even in a virtual environment.

“[We thought] okay, Blue has to be a positive influence, he has to be upbeat, that’s who he is, he’s a happy-go-lucky guy, we’ve known that forever,” Krauss said. “My mantra for the last year is to be able to bring at least one smile to our followers’ and fans’ faces every day, and if Blue can do that, he’s doing a good job.”

Blue has been constantly active on social media platforms such as Instagram throughout quarantine, and he still posts online every day. Blue posted a wide variety of content, such as pictures of him lounging around the house, Zoom calls with other live mascots and events such as virtual game nights.

For one student, Blue’s social media presence during quarantine was a way to connect to Butler’s campus despite living far away.

Sophomore Gaby Nardella, a dance arts administration major, created the @butlerbluefanpage on Instagram as a way to keep busy during quarantine. Since its creation, the account, which features both Blue and Trip, has garnered over 1,000 followers.

“I’m eight hours away from [Butler’s campus] and… I felt like I needed some way to connect with [Blue] even from afar… And just to show my love for Blue and Trip.”

Now, at 15 months old, Blue is what Krauss described as a “teenager.”

“He’s starting to get a little bit of edge to him, a little sassiness, which is perfect,” Krauss said.

For Krauss, Blue is both a mascot and a family member. He was present for Blue’s birth back in Oct. 2019, and said the two of them have a father-son connection.

“At the end of the day he sleeps in my bed, so it’s weird,” Krauss said. “But he is the Butler mascot… And that’s kind of the mindset I have to go in with every day, is that he is a shared dog. Granted, I’m the one tasked with taking care of him and I’m very happy to be tasked with that, and our bond is like family and at the end of the day, he is my family.”

While Blue is close with his family, Krauss also said Blue genuinely enjoys his work at Butler. In fact, while being interviewed, Krauss had to spell out the word W-O-R-K rather than saying it, because Blue would have run to the door.

“He loves the people,” Krauss said. “He is just a people pleaser. He likes to be able to meet new people, he loves that part… He is very happy to go meet somebody else new, which is a great sign because a dog could be pretty dependent and could have separation issues and want to stay with [his] person [after quarantining during COVID-19], but he loves to go meet other people and new people.”

Blue’s appearances around Butler’s campus are still limited due to COVID-19; for example, he is unable to hold his bookstore “puppy hours,” as he did before the pandemic. However, Blue is still attending the in-person events that he can, including men’s basketball games.

After watching Blue grow up for the past year, Nardella said he is always able to help her feel like she’s at home at Butler, even when things are difficult.

“I just think I admire his strength, and the fact that he does this every single day, he gets up and he’s a live mascot, that’s a big deal,” Nardella said. “Not many dogs in the world get to do that. So, I’m just so proud of him, and it’s not like he’s like my child or anything, but I’m proud of him and I’m proud to be a part of the school and to have him beside me.”