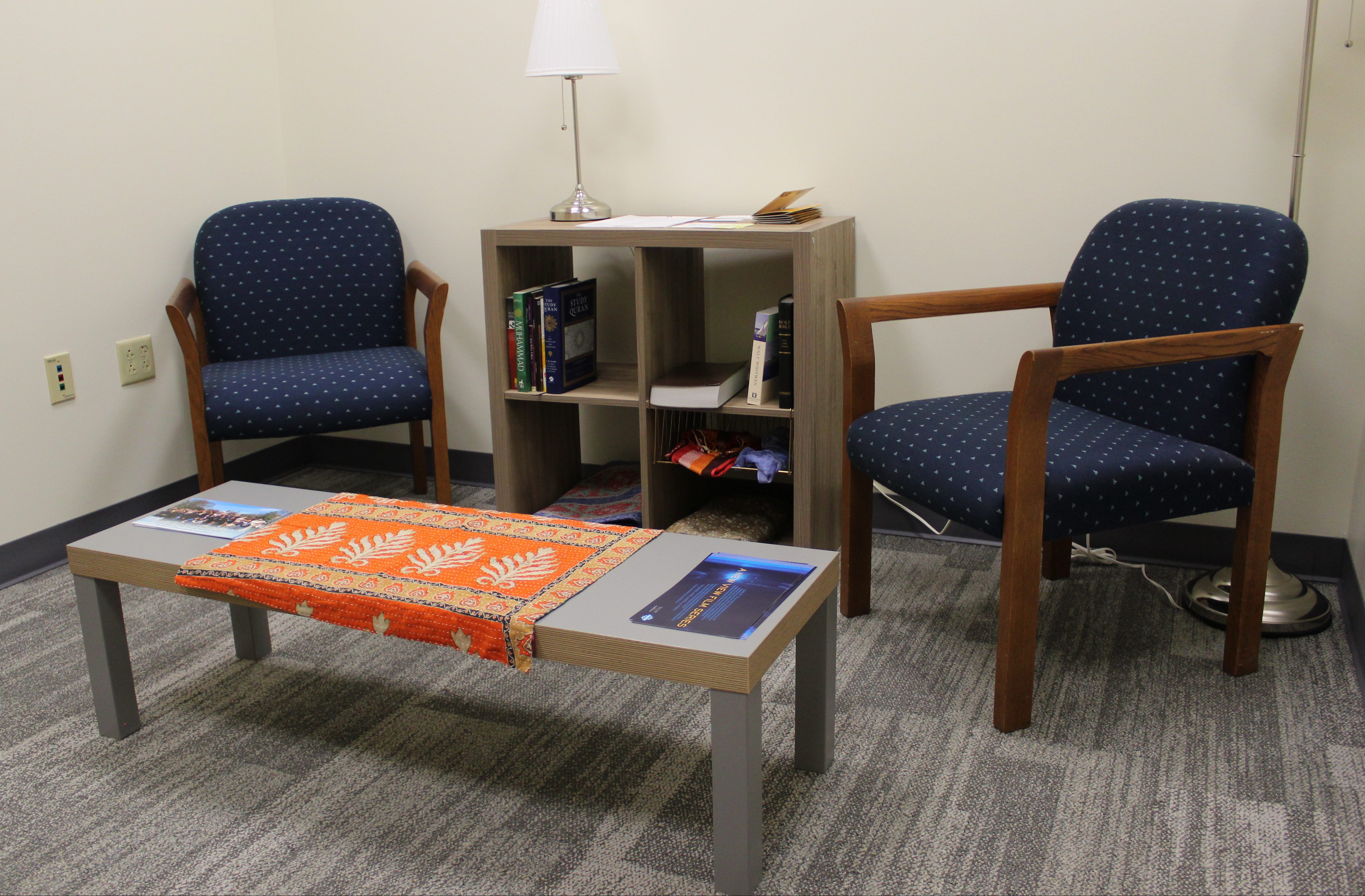 The layout of one of the new prayer and meditation rooms in Jordan Hall. Photo by Carl Nelson.

Reflection, meditation and prayer rooms in Jordan Hall will now be available to all students and faculty, regardless of religious affiliation.

The rooms are located on the first floor of Jordan Hall  in 182 C and D. They are open from 8 a.m. to 8 p.m. every Monday through Friday, according to an email announcement from Frank Ross, vice president of student affairs, on Aug. 27.

In the email, Ross said the “rooms will not be able to be reserved or programmed, but simply available for individuals to use for their own practices.”

Daniel Meyers, director of the Center for Faith and Vocation, said the initiative to create prayer rooms started last year.

“There was some discussion in the winter from student leaders in the Muslim Student Association about various things that would be more accommodating for some of their religious practice and one of those things was having a prayer space that was more central,” Meyers said.

Senior biology major Nida Khan, Muslim Student Association president, said the initiative to create the meditation rooms came from Muslim students who wanted a time and place to pray in between their busy classes because many Muslims will pray five times a day.

“A lot of students would be on campus and they wouldn’t want to have to run back to their dorms in-between class to pray, and actually a lot of our kids commute so it was hard for them to find a space on campus where they felt like they could have a quiet area to pray,” Kahn said.

Khan said the administration played a large role in the process and had initially asked the association how the school can create a better experience for current and future Muslim students.

“One of the main concerns was having that central area where we could pray and just kind of have five minutes of quiet reflection time where we don’t have to worry about people walking in or staring and that sort of thing,” Kahn said.

The university has also invested in new carpet, paint and furniture for the rooms.

Marguerite Stanciu, assistant director of the Center for Faith and Vocation, said center has always aspired to have some centralized space on campus.

“This was a wonderful opportunity that presented itself,” Stanciu said. “We’re so busy in and out of our daily lives so it’s really good to have a place and time for people to just be. They can spend time quietly practicing whatever practice they do, and that helps to rejuvenate and energize people.”

Meyers said he likes to ask the question, ‘What does ‘welcome’ look like?’ and then tries to live out that statement by making everyone feel included.

In order to show respect, students are asked  to remove their shoes before entering.

“That way we were trying to keep the sanctity at a higher level,” Meyers said. “If some folks don’t care that’s fine, but we sort of want them to practice in a space where the folks who would care are at. So as a way to keep it accessible to everybody, we ask them to take off their shoes.”

Students or faculty using the rooms may find headscarves and prayer rugs that can be used if needed. The room also has the lights off, with only two soft lights in each corner, creating a better atmosphere for meditation and prayer, Stanciu said.

“We do have a selection of sacred texts inside, which represent various faith traditions,” Stanciu said. “There’s a meditation cushion as well. So the space is very simple and well-pointed for reflection, meditation and prayer.”

Khan also made it clear the meditation rooms are not only for Muslim students and faculty.

“It’s for people who are praying, or even people who don’t have a particular faith that they are trying to practice, but just for people who want to take a second and reflect or need a space that’s quiet or where they can be alone,” Kahn said.