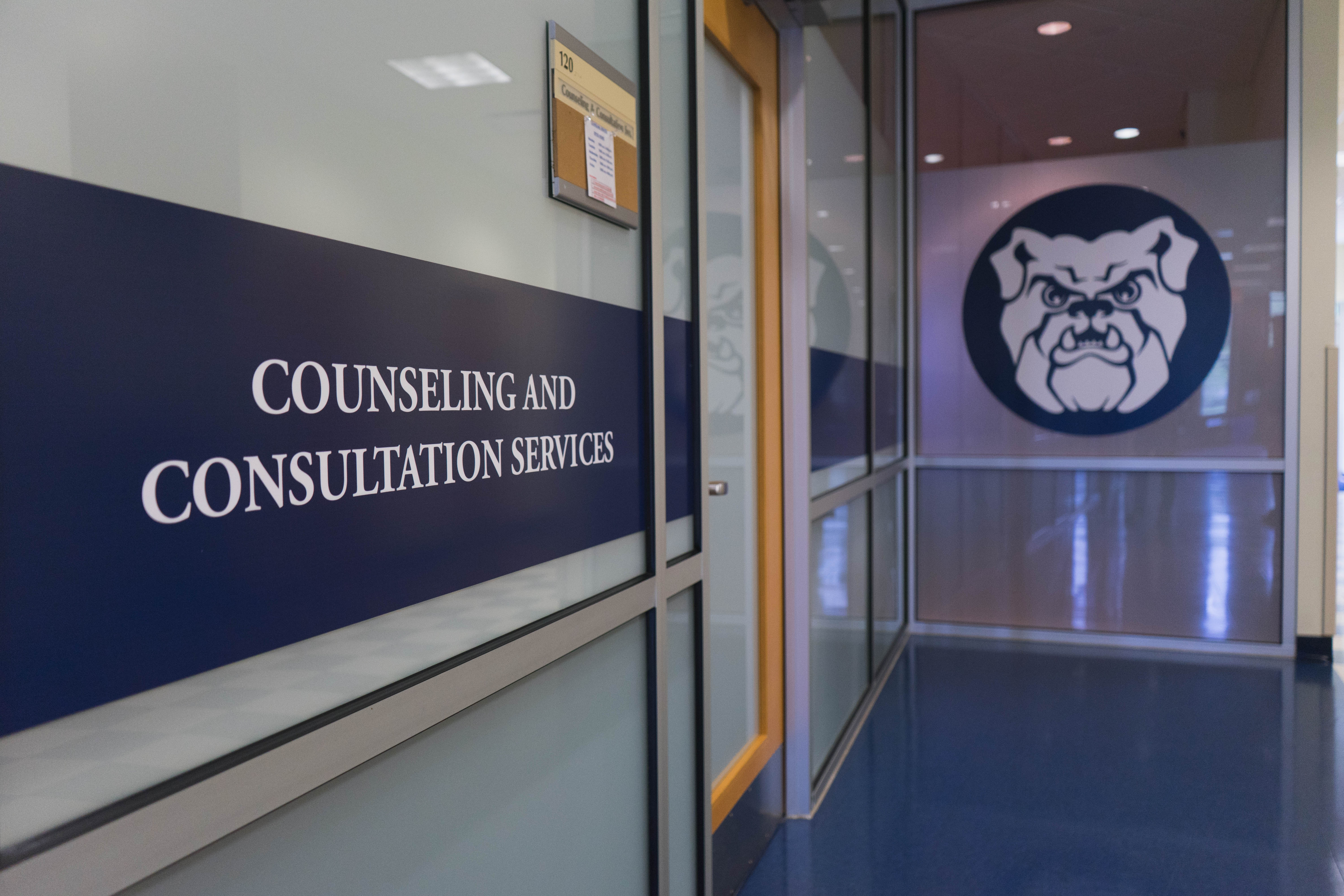 Butler Counseling and Consultation Services is free to all students and is located in the Health and Recreation Complex. Collegian file photo.

Tucked away in the back halls of Butler’s Health and Recreation Center is a service that 12 percent of the student body utilizes. The Counseling and Consultation Services office is a mental health resource for Butler students to visit, free of charge. CCS offers therapy sessions with a staff of 12 therapists — nine of whom are interns that only stay for one year.

Maddie Mays is a junior English literature major who first visited CCS in April of her sophomore year at Butler.

Although the counselor she had was helpful, Mays said, it was near the end of the school year so she was only able to attend a few therapy sessions before summer break began. And by the time Mays returned to school in August, she was assigned a completely different counselor.

“It was difficult when I came back in the fall to realize that I had to retell my whole story to someone else because that person was now gone,” Mays said.

Butler’s CCS participates in a national doctoral intern program where graduate or professional students work as counselors for a year as a final capstone to their master’s degree. Every academic year, three doctoral psychology interns are selected from all over the United States through a matching system, similar to the medical school residency matching process, for Butler’s program at CCS.

Additionally, five or six trainees still pursuing their master’s or doctoral degrees are selected from graduate schools around the region for the practicum internship. No Butler students are ever elected to be interns at CCS.

Keith Magnus has been serving as director of CCS at Butler for 18 years. He is one of three full-time staff members who work at the center alongside the nine interns.

“These [interns] are really good, like I’d refer my family members to them,” Magnus said. “They have a lot of experience.”

Now, after a year of working with one therapist, it’s nearly time for Mays’ current therapist to leave. In the fall, if Mays decides to return to CCS for her senior year, she will be paired with a new therapist.

“I’m counting down the weeks now and it sucks, because she’s helped me through so much and I’ve made so many incredible breakthroughs,” Mays said. “Although it’s hard that she’s leaving, I wouldn’t have traded my experience for anything because she has helped me so much.”

Gianna Kujawski, junior English major, is currently deciding whether she wants to return to CCS next year, for similar reasons as Mays.

“It’s very hard to retell intimate details of your life to somebody brand new, even if they are wonderful,” Kujawski said. “You have to relive those experiences that you’ve been through to keep going, so it is like a step backwards. You get to know these wonderful people and then they leave, and I feel like I’m back at square one.”

Steve Hines has been a licensed psychologist since 2011 and is currently the assistant director of the counseling center. Hines worked at Purdue before coming to Butler, and he explained how difficult it is to end a therapeutic relationship from a therapist’s point of view.

“It can be hard, no doubt about it,” Hines said. “We talk with students about it and we try to do whatever we can to try to help them transition to a new therapist. We know for many students it can actually be a good thing to switch therapists because you get a new perspective.”

The interns, fresh out of graduate school, are familiar with the most up to date evidence-based practice models and have a wide array of expertise in different areas, Hines said.

CCS keeps clinical records of every client, so any new intern therapists that arrive are thoroughly prepared and brought up to speed on a client — their situation, the progress they’ve made, goals they have and likewise.

“Therapy is always, always supposed to feel safe and that’s our top priority,” Hines said. “One of the hardest parts about therapy is that it doesn’t always feel comfortable. Sometimes what we’re asking folks to do in therapy is step outside of their comfort zone and sometimes that can mean switching therapists.”

Some people only need a few weeks or one semester of counseling; so, the switching of therapists doesn’t affect them as much, junior Mays said. She said that she needs to see a therapist long term. So, CCS’s annual internship program is not very helpful to her.

“In order to work through my trauma, I have to continually go and figure this stuff out, and stopping would be the worst thing for me,” Mays said.

CCS director Magnus explained that last year CCS held more than 3,000 therapy sessions, and that number will most likely increase this year.

“We are trying to transition to being brief so we can keep up with the demand,” Magnus said. “I wish we could accommodate all the needs, but we can’t.

He referred to CCS as a “brief model,” but there is no limit to the number of sessions a client can attend while a Butler student. A brief model is an approach to therapy that targets the desired outcome of therapy as a solution rather than focusing on the problem, symptoms, or issues that brought someone to your office. This technique usually results in short term clients.

On average, a client comes to six therapy sessions, whether individual or group sessions.

The majority of clients at CCS are short term. Clients who come to CCS on a long term basis,becoming the exception, due to the high demand for the center’s services, Magnus said.  He defined long term as more than a semester of counseling.

“To avoid wait lists, to get people in, to be efficient, we need to draw some lines there,” Magnus said. “I’m not defending that, because that’s unfortunate. We’d like to help everyone that comes in the door but we’re having to make some tough decisions.”

When Magnus started working at CCS 18 years ago, when it was located in the two-story house on Sunset Avenue that BUPD now occupies, the center saw between 150 and 200 students a year. Now, CCS sees around 600 students annually.

“The reality of collegiate mental health these days is the demand for services has just skyrocketed over the last 10 years, which is a really good thing,” assistant director Hines said. “It means that students are feeling more comfortable accessing services.”

If a client admits to wanting long-term care from their first session, CCS may try to refer them to a trusted service in the Indianapolis area, Magnus said.

“We as a campus community have done a really good job of making it OK and safe for people to come to the counseling center, but the result of that is that more and more people are coming,” Hines said. “As our demand for services has increased, we have had to kind of adjust and modify the types of services we’re able to provide.”

Long-term effects is one of the factors in Kujawski’s decision about utilizing CCS again her senior year. Inevitably, her new therapist will leave, and Kujawski says she may stay in Indianapolis after she graduates, so it could be worthwhile to invest in a longer-term therapist in the area.

“There is some benefit to having a new person, even though it’s hard and kind of clunky and you have to work through that,” director Magnus said. “Sometimes it’s a pleasant surprise.

Current licensed psychologists have a professional responsibility to help ensure that the next group of people that are going to be out practicing in the field of psychology are well-trained under intensive supervision, Hines said.

“The interns we get are some of the most competent, qualified and professional people and also received intense supervision and training throughout their year,” Hines said. “I do believe with everything in me that students on this campus are benefitting from the expertise that they bring.”

Both students Kujawski and Mays said they truly value CCS as a resource on Butler’s campus.

“For me, the benefit has outweighed the negative parts of it,” Mays said. “I’m so thankful we have it here at Butler. I don’t know what I would do without it. It’s cheesy, but I know that it has practically saved me.”