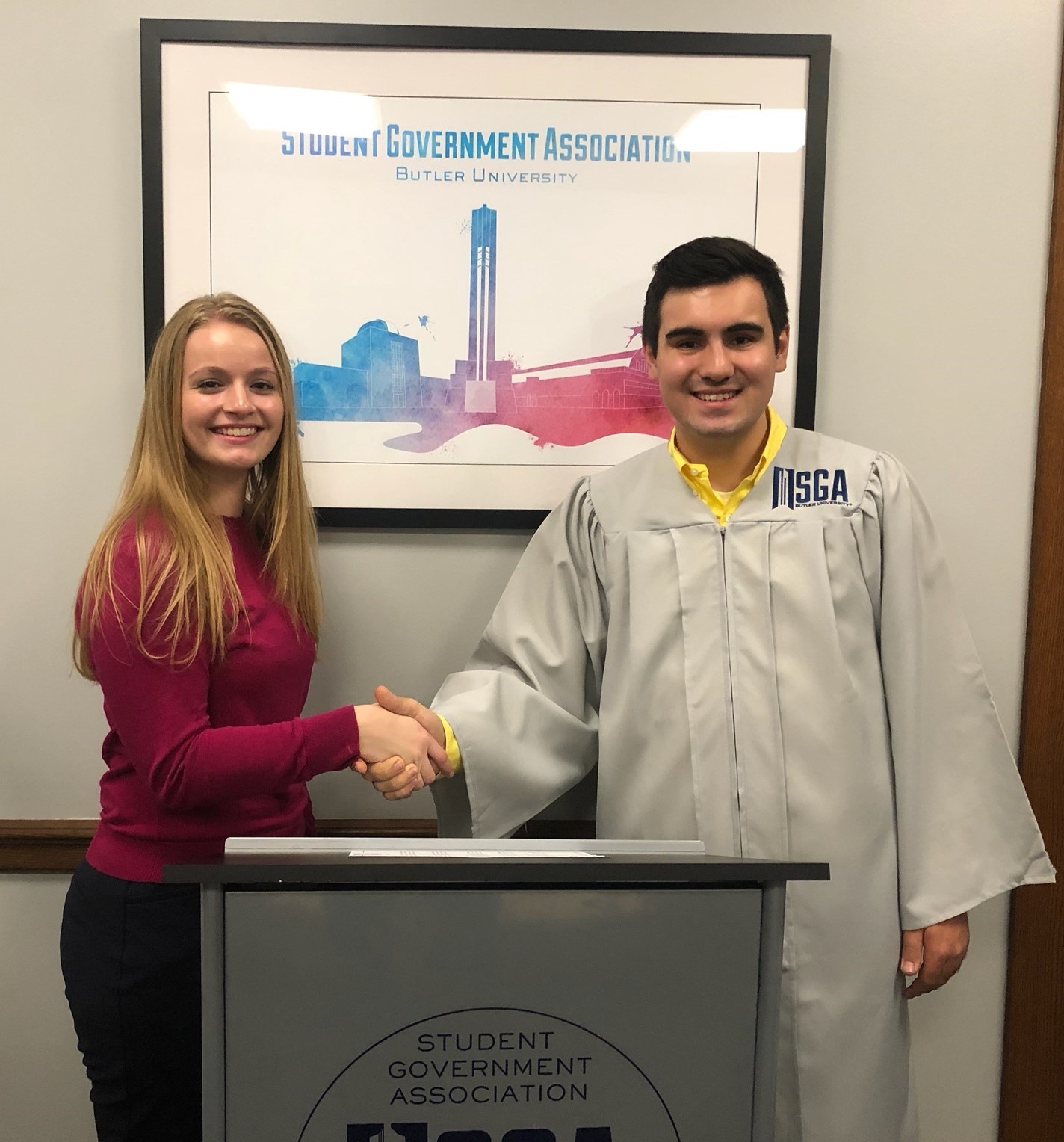 Farrah Goodall, a sophomore philosophy and Spanish double major, was confirmed unanimously on Jan. 15 by the SGA Student Senate in her new role as executive vice president.

On Jan. 15, Sam Varie, a senior strategic communication major, resigned from his position as SGA president to join former South Bend Mayor Pete Buttigieg’s campaign for the Democratic presidential nomination. On the same day as his announcement, Malin Peterson, a senior youth and community development major, was sworn in as the new student body president and nominated Goodall as her executive vice president.

Peterson said she did not consider anyone else for the job.

Goodall was an Associate Justice this past fall semester. SGA is currently looking to fill this role. During the 2018-19 academic year, she served as the ResCo Senator on the Judicial Review committee. That year, she won Senator of the Year at SGA’s end of the year banquet.

“I’ve had a lot experience on SGA,” Goodall said. “That makes me qualified, but also I’m here and up for suggestions…I’m still the same person. I just have a new title.”

Stevie Sedlacko, SGA Speaker of the Senate, said he will be working with Goodall in her new role almost every day. They have worked together in the past on the Judicial Review committee and the Election Oversight committee in the Senate.

“I consider her a friend, I really do,” Sedlacko, a junior healthcare and business major, said. “And so being able to continue to further that friendship and further that relationship within SGA is going to beneficial for us both. I’m excited, I think she’s going to do great.”

At the confirmation hearing, Goodall shared a bit about herself, along with Peterson and Sedlacko.

“Her leadership and experience were more than enough to qualify her for this type of position, especially being thrown into this position so quickly,” Sedlacko said. “But I think people just saw her as a person they want to work with and a person they think would be a great fit for our team and what we want to accomplish the rest of the semester.”

Sedlacko said it is important to have open communication between the executive and legislative branches, and between SGA as a whole and the student body so no one’s left in the dark.

J.P. Clark, a sophomore environmental studies and anthropology and religion double major, said he does not really know how SGA impacts the student body and what they do, but he is not that interested in it either. Rather, he focuses on his education.

He trusts, though, that SGA will represent him, Clark said.

Peterson is hoping to continue her and Varie’s vision and fulfill their campaign promises such as being a voice for the student body and enhancing diversity programs. She and Goodall have had several transition meetings.

“At the end of the day, I think we’re just here to serve the students do everything we can for them,” Peterson said. “And I think just having the rest of our team and everything there as well really made a kind of like, all right, nothing is really changing. This is just continues exactly we’re doing.”

Goodall brings a fresh perspective as a new member of the executive cabinet and as a sophomore.

Peterson said it is easy to get used to how things should be and what to expect when a student has been at Butler University for four years.

“I don’t think there should be necessarily a precedent of this is how old you have to be or this is how much experience you have had on SGA,” Peterson said. “I think, with the passion and the dedication and the love for the organization and the ability to lead, I think only those should be available to anyone.”

Goodall said SGA can be intimidating at first for underclassmen.

“They might find it like, ‘Oh, that’s for upperclassmen,’” Goodall said. “But hopefully they’ll see that it’s not, and if they want to get involved, they should because it’s an awesome opportunity.”

Sydney Kastelitz, a sophomore strategic communication major, said Goodall being a sophomore is significant because it means the community can trust underclassmen.

However, Kastelitz said she is concerned about Peterson being a second-semester senior; will she be as engaged in SGA and prioritize it over her future?

“I think it’s very clear that entering this role has not been conventional,” Peterson said.

That’s how Peterson wants to define her presidency: unconventional, but supportive.