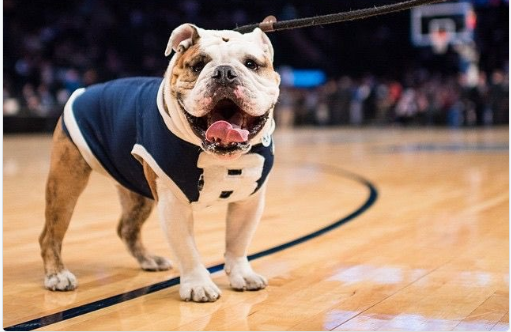 Trip will be retiring at the end of this school year. Photo courtesy of Butler Blue III’s Twitter page.

Butler University announced on Oct. 22 that Butler Blue III will be retiring following the completion of the academic year. The announcement of his “One Last Trip” tour has sparked reflection and a celebration of his many years of service to the Butler community.

Trip has done a lot since his first appearance before a packed Hinkle Fieldhouse in 2012. He has been a force for good in the community, visiting patients at local hospitals and promoting literacy through “Good Boy, Blue,” a legacy of Blue II.

He has also been a recruiter and representative for Butler, visiting students around the country to congratulate them on their admission to the university and hand-delivering acceptance packages.

Nadia Issa, a sophomore economics and finance major, was one of the students surprised by Trip before coming to Butler. Issa had already been accepted to Butler and had recently interviewed for a scholarship when she got the unexpected visit at her school.

Before being visited by Trip, she did not plan on coming to Butler. Issa said she had heard a lot of negativity about coming to Butler as a minority student. People had told her she would not be accepted and she did not fit the mold of a Butler student.

However, Issa said Trip taking the extra effort to come visit her showed her that she was accepted and wanted at Butler, and proved it to the people who told her she wouldn’t be.

Issa had a message of gratitude when asked what she would tell Trip if he could understand her.

“Thank you for making me feel welcome in a society that otherwise didn’t,” Issa said.

Thomas Dziwlik, a first-year international business and finance major, was also visited by Trip before coming to Butler. Dziwlik came downstairs for breakfast on the morning of his birthday to find a Butler Bound poster and Trip in a birthday hat.

Dziwlik described Trip as a symbol of what a Butler student strives to be — energetic and ready to help with anything. He also commended the influential mascot’s role on campus, saying that there has never been a boring moment with him or a moment where he didn’t impact someone. If he could say one thing to Trip as he approaches retirement, it would be to tell him what a good job he has done as mascot over the years.

“He just brings joy and brings that sense of community,” Dziwlik said. “I think his attitude and his ability to do that for people on campus deserves a well done and a thank you.”

Senior marketing majors Greer Garvin and Ben Taylor were also impacted by Trip throughout their time at Butler. Both were amazed by the positive impact Trip could have on students by simply walking around campus for students to see him.

For Garvin, Trip was a big reason she ended up at Butler. Being someone who loves dogs, Trip made her feel at home on campus. If she could tell Trip anything, her message would be simple.

Taylor also had a message for Trip, but opted for a more universal language on Butler’s campus.

Trip’s impact has been felt by these students and thousands more during his time at Butler.