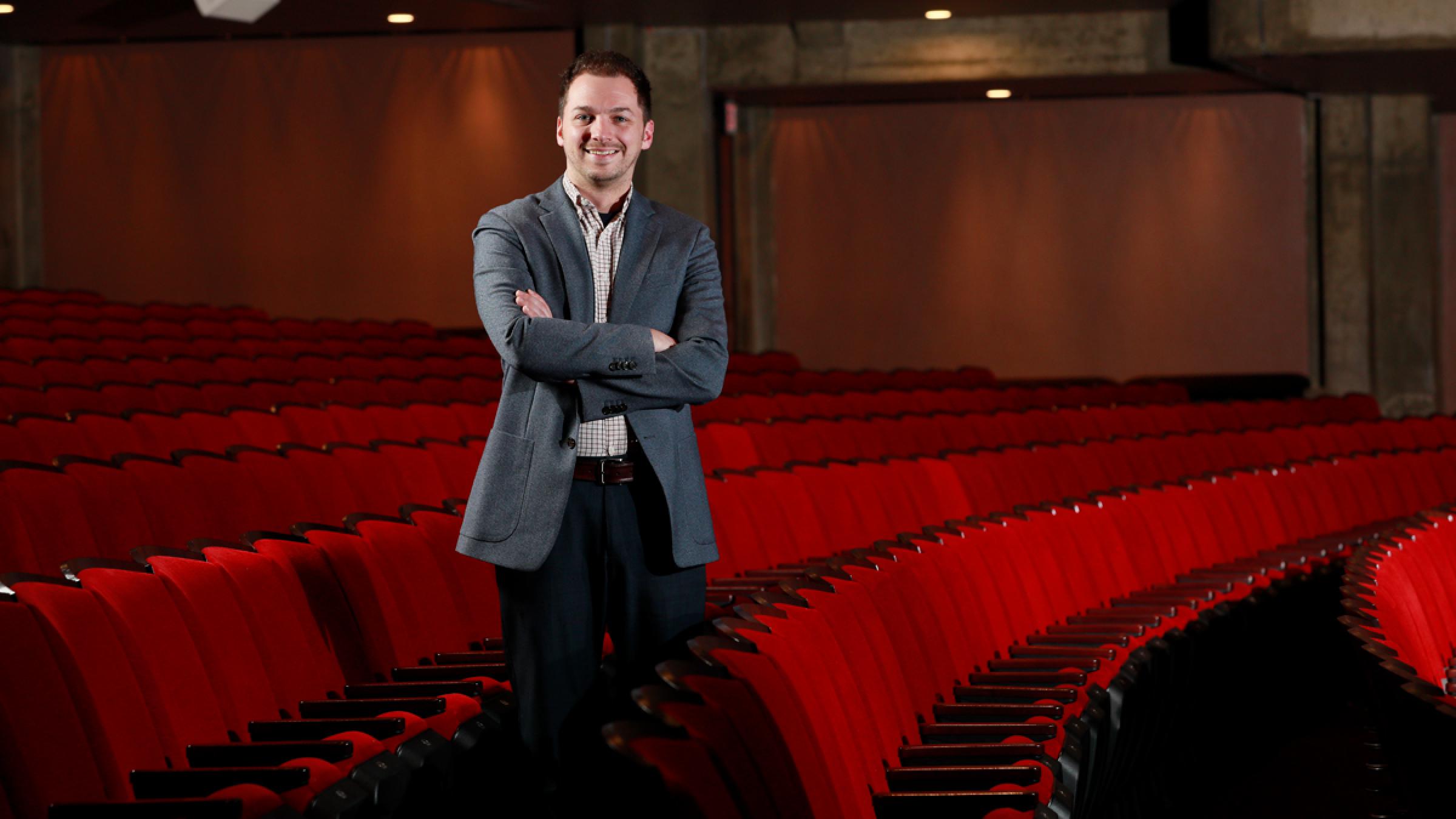 In December 2014, Emmy-nominated actress and equal rights advocate Laverne Cox spoke at Butler’s Schrott Center for the Arts. During her talk, one student stood up during the Q&A portion of the talk and said to Cox, “Thank you for being here. You’ve changed my life.”

Four years later, Hurt is changing more lives. In his new role as executive director of the Butler Arts Center, he is responsible for getting prominent figures like Laverne Cox to come to Butler’s campus,

“I like that we have an impact on people’s lives in very profound ways,” Hurt said.

But Hurt’s ties to Butler are rooted far deeper than his new position. They started before he was even born — when his grandfather helped hang the first Clowes Memorial Hall stage curtain, and continued when Hurt’s father swept the venue’s floors at age 16.

Preceded by two generations of Butler heritage, Hurt’s been a Bulldog since his beginning. Yet when his turn came to attend college, Hurt went to a different university before transferring to Butler as a sophomore. He started as a music education major, but soon discovered his passion for arts administration.

“What I thought was so cool about the experience here is that you do not feel like you are alone ever,” Hurt said. “I don’t mean that as a ‘someone’s always in your way’ kind of thing, but you are never alone in a problem.”

Hurt said he wants to pass forward the dedication that he felt during his undergraduate days at Butler by putting more focus on the student population and greater Indianapolis community.

The Butler Arts Center is the uniform name for the four main event venues on campus — Clowes, Schrott, the Eidson-Duckwall Recital Hall and the Lilly Hall Studio Theater.

Hurt said his goal is to diversify programming at the Butler Arts Center to appeal to what Butler students and people from the Indianapolis community want.

“What is culture now? It might be staying at home to watch Netflix, eating at a food truck or going to a concert,” Hurt said. “People are not as interested in more traditional art forms like the operas, symphonies and so on.”

Hurt is turning towards the greater Indianapolis population to offer a broader range of arts events. He is implementing this by offering cheaper tickets for most shows and selecting shows that appeal to audiences in the area that are not as frequently recognized.

“The arts are not just for upper, middle class white people,” Hurt said. “It should be for everybody.”

“The sky’s the limit really,” Hurt said. “We have to look at what is considered arts entertainment and make sure we are being at the forefront of that so that everyone has a place to feel at home here.”

Lisa Brooks, the dean of the Jordan College of the Arts, works closely with Hurt.

“He is so completely student-centered,” Brooks said. “Every performance we do, he has ideas about how to make them better.”

Brooks and Hurt are discussing ways JCA and the Butler Arts Center can work better together in the areas of marketing, fundraising, staffing, and programming in order to enhance Butler’s reputation in the arts.

Together, JCA and the Butler Arts Center bring different world-renowned artists and professionals, from dance companies to composers, to campus to host workshops and work personally with JCA students. The professionals often also perform for the public during their time on campus.

Brooks said it is an “important part of our education.”

“It helps us to see the transitions between a school setting and the professional career we are preparing to go into,” Maggiore said. “Being able to talk with professionals at such a high level is very beneficial to us and inspiring.”

Students outside of JCA will also benefit from Hurt’s efforts. One of his goals is to be more collaborative in programming for the student population by working directly with Frank Ross, vice president for student affairs.

“Clowes is not just going to be something that is disrupting traffic for you trying to get to class,” Hurt said. “It’s going to be an actual benefit to the students.”

It is not rare for Hurt to work 17-hour days or seven days a week on a show. When he is not on campus, though, he can usually be found near Turkey Run State park, renovating a cabin that he and his father recently bought.

“When you find something you love, it does not feel like work — it’s just your life,” Hurt said. “I really believe that.”