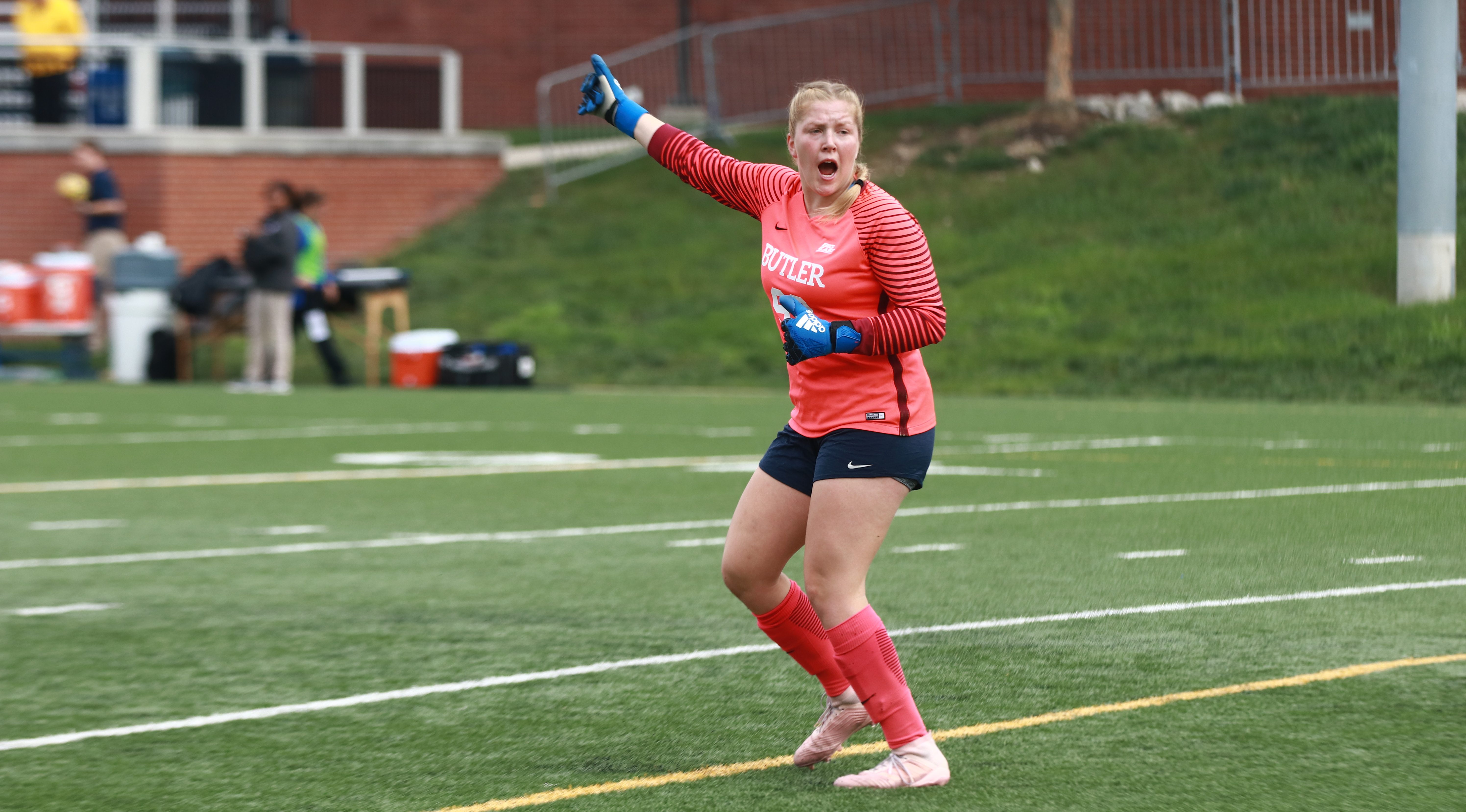 Leonie Doege calls to her teammates during a game this season. Splitting time in net, Doege and Hannah Luedtke have combined for 21 wins and 21 shutouts since 2017. Jimmy Lafakis/Collegian file photo.

But what if a soccer team had two goalkeepers?

Over the last two seasons, the Butler women’s soccer team has perfected a two goalkeeper system, allowing the team to become one of the most defensively stout in the Big East conference.

“It’s very difficult to keep two, let alone three goalkeepers happy, said assistant coach Robert Klatte, who works with both goalkeepers. “If they’re all fairly close and equal, what we thought was we could insulate our team from potential injuries and having to put a player in that doesn’t necessarily have the same level of experience by rotating the goalkeepers.”

The conclusion? It works.

Since Doege joined the program in 2017, Butler has used more than one goalkeeper in 34 of their 39 matches — resulting in 21 wins and 21 shutouts. The Bulldogs have allowed more than two goals in a match just two times since the beginning of the 2017 season.

The first match that Luedtke and Doege split time in the regular season came in a 2-0 combined-shutout victory over Bowling Green in 2017. Since then, they’ve combined for an 11-2-5 record in Big East play, two second-place finishes in the conference standings and an NCAA Tournament appearance in 2017.

“I think that with both of us being able to play we can play to our strengths and limit the amount of goals that are scored and have higher amounts of shutouts,” Luedtke said. “At the same time though, we’re not doing it alone, it’s definitely a team effort.”

Doege closely analyzes and assesses the opposition in the first half, which she uses to her advantage in the second half.

The Bulldogs used a single goalkeeper in each of their first three matches in 2017 and went on to do so two more times last season. Butler was 3-1-1 in those matchups.

The last time a Butler goalkeeper played a full match for the Bulldogs came when Luedtke shut out Indiana State for a 1-0 win on Sept. 17, 2017. Luedtke started back-to-back matches for the Bulldogs at the tail end of conference play last season.

“It lets me know that for those 45 minutes, I need to be doing my part on the field to help my teammates,” Luedtke said. “In the second half, I’m constantly trying to cheer loud enough so that they can hear me on the field which is a big part of our roles if we’re not on the field.”

Despite playing the majority of her Butler career in the second half, Doege does have experience when it comes to starting matches at the collegiate level. Her first appearance in a Butler uniform was a complete-game shutout performance against No. 18 Notre Dame, which ended in a double overtime scoreless-draw to open the 2017 season.

“Sometimes it can still be hard to adjust to coming in for the second half, especially if the opponent is at the same level as us,” Doege said. “Obviously the field players have already adapted to the tone of the game and I have to catch up and adapt to the pace as well.”

Being a native of Germany, where international play only allows three substitutions, there were initial adjustments to her second-half stints in the U.S.

“I personally had never been in this type of situation before because in international soccer you basically never substitute the goalkeeper,” Doege said. “At the beginning, I had to get used to the fact that as a goalie you step in and want to set the tone but you don’t get that many touches.”

As a defender, senior Madison Toth said communication is key when there is a change in the net for the Bulldogs.

Luedtke and Doege, along with sophomore goalkeeper Stephanie Rodriguez, combine to create a highly competitive goalkeeping group for the program, with each member of the trio bringing their own facets that push and drive the others.

“I will tell you that working with these three young ladies, they create a fantastic environment that drives all three of them to be better,” Klatte said. “They see Leo make a great save, then Hannah will step up and make one too and Steph will pull something off as well. It drives on each other and I think our team is in a better position because we have three quality goalkeepers right now.”

Rodriguez saw her first collegiate action this season on Sept. 16 against TCU, when she shut out the Horned Frogs in 17 minutes of play. Despite playing in more of a reserve role for the Bulldogs, Rodriguez still looks to have her fingerprints on her teammates success.

“I think the goal is to try and help make it to where we as goalkeepers have an encouraging space where everyone is able to take their skills to the next level and push each other to their best,” Rodriguez said. “I really try and help perfect the training to then help the team as a whole.”

With limited playing time, Rodriguez may have the toughest, but also the most important role of the three goalkeepers, Klatte said.

“Being the third goalkeeper right now, Steph comes out and works hard,” Klatte said. “She’s competitive, she drives and she’s got such fantastic work ethic and competitive nature. She’s the one that keeps those two together and works both of them hard. She does a fantastic job of being a team player and I think that’s such a huge element for us to be able to do what we do.”

Even as a field player, Toth can see the work the goalkeeping group puts in over the course of the season.

“They have a competitive edge, even when we’re in practice all three of them compete so much and I think it’s that drive and competition every day that brings them to the absolute best that they can be,” Toth said. “They push each other and I can see even when they’re off doing separate things from the field players, they are all working so hard.”

The group’s willingness to put the team over personal goals, Klatte said, speaks to the character of the goalkeeping group.

“They’re great people and I feel like part of my job is to continue to ensure that we as a goalkeeping group challenge each other to be better and push each other on a daily basis,” Klatte said. “I think it probably ends up where it doesn’t make any of the goalkeepers happy, but at the same time, I think they feel like it’s probably for the greater good of the team and that’s why we did it.”