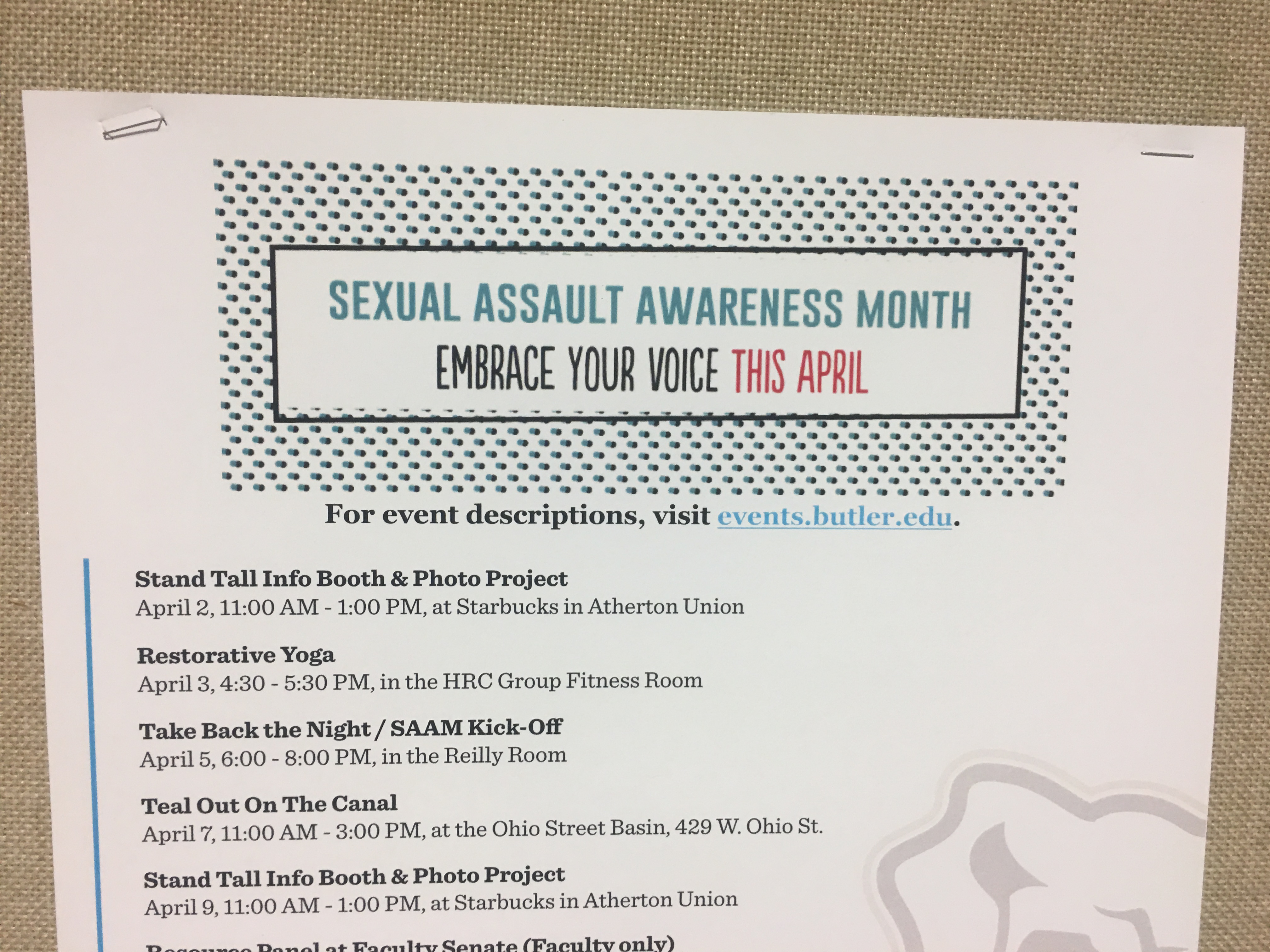 Several students and Butler University’s Victim Advocate, Sara Minor, do not believe the university’s planned increases in sexual assault awareness and prevention programming are effective ways to address the issue on campus.

On March 26, Butler students received a Butler Connection email including a memo about April being sexual assault awareness month.

“While there are efforts in place all throughout the year to prevent sexual assault and promote healthy relationships at Butler, we participate in SAAM each April to raise consciousness of these important topics,” the Connection read.

The next day, Butler community members received another email, this time from Frank Ross, Butler’s vice president of student affairs. The email included a brief message from Ross and continued to outline how Butler intends to improve its approach to sexual harassment and sexual violence.

It also mentioned a focus on strengthening the university’s support to survivors by training staff on how to respond to survivors, revisiting current policies and “campus climate,” and hiring additional investigators and student interns.

Minor is Butler’s prevention educator and victim response specialist in the Office of Health Education and Outreach Programs. While she appreciates the idea of spreading awareness about sexual assault, Minor is not as infatuated with SAAM as one might think.

“Anything that brings awareness to sexual assault prevention is important, however, we know and research tells us that programming is not the answer to an entire cultural shift,” Minor said. “This is a time where we can put emphasis on what is going on on campus and resources that are available, but [SAAM] is not an answer to sexual assault on our campus.”

Most campus sexual assault programing has been found to be ineffective, according to the New York Times.

“It is important to recognize that there is never going to be an hour-long session that I can put you through that is going to change you,” Minor said. “Someone who commits sexual assault has probably endured a lifetime of social conditioning, and we aren’t going to undo that thinking in a short amount of time.”

Minor believes the email and plan were a public relations response to the IndyStar article that was published Jan. 29.

“A lot of the things that are in this plan are things that we are already doing around campus,” Minor said. “A stranger might look at this and say, ‘Oh my gosh look at all these new things that Butler is doing! That is awesome!’ But here in the Office of Health Education, we recognize that a lot of the stuff has already been going on. We are happy that we do not need to recreate the wheel when an article comes out.”

An example of this would be the email’s bullet points that read, “Expand required sexual harassment and sexual violence education beyond just when students join the University community.”

Lucas Graden, a sophomore digital media production and strategic communication major, said he agrees with Minor on the feeling of the email.

“It feels much less genuine of a communication between administration and students and more like something orchestrated between the public relations department of the university,” Graden said.

Minor was not contacted or asked for input in Ross’s statement, she said. She described the message as a mixed bag that highlights a lot of the good work the university is doing, but also said she wished someone had reached out to her about the message because there were some things that she would have changed.

“For example, the bullet that talks about a campus-wide alcohol [education program],” Minor said. “I would never want to include a statement about alcohol in relation to a message on sexual assault. It creates an illusion that there is a link between sexual assault and alcohol, and while we know sometimes perpetrators use alcohol as a tool to help them perpetrate sexual assault, we would never want anyone to think that alcohol lowers someone’s responsibility or that a victim of sexual assault who has been drinking is at all to blame [for being assaulted].”

Minor wanted to emphasize that underage students reporting sexual assault, whether they be witnesses or victims, have never been penalized for drinking.

“It is a myth on this campus that serves as a barrier that prevents people from reporting,” Minor said.

Chris Sanders, a junior psychology major, said he is unhappy with how the university went about forming this plan of action.

“It is extremely irresponsible to not consult the one office of the university that they should be talking to about the topic,” Sanders said. “I’m sure that they do want to address the problem but they need to talk to people who know what they are doing.”

The email from Ross emphasized that the conversation about sexual assault must continue.

“This is by no means the end of this discussion… Let’s work together to support the safety and well-being of our campus community,” Ross wrote in the email.

He also encouraged that responses and thoughts be sent to VPSA@butler.edu.

One of the points in the email that Minor is most excited about is the idea of hiring more staff members, including a full-time Title IX investigator, and informing parents on Title IX policy. She said because part of her job is talking survivors through their options, this is the area the university needed the most improvement.

“There are times when we really nail it, and there are times that I wish that we could have done something differently,” Minor said. “I definitely think that having more support in the Title IX area, survivors are going to feel it on campus.”