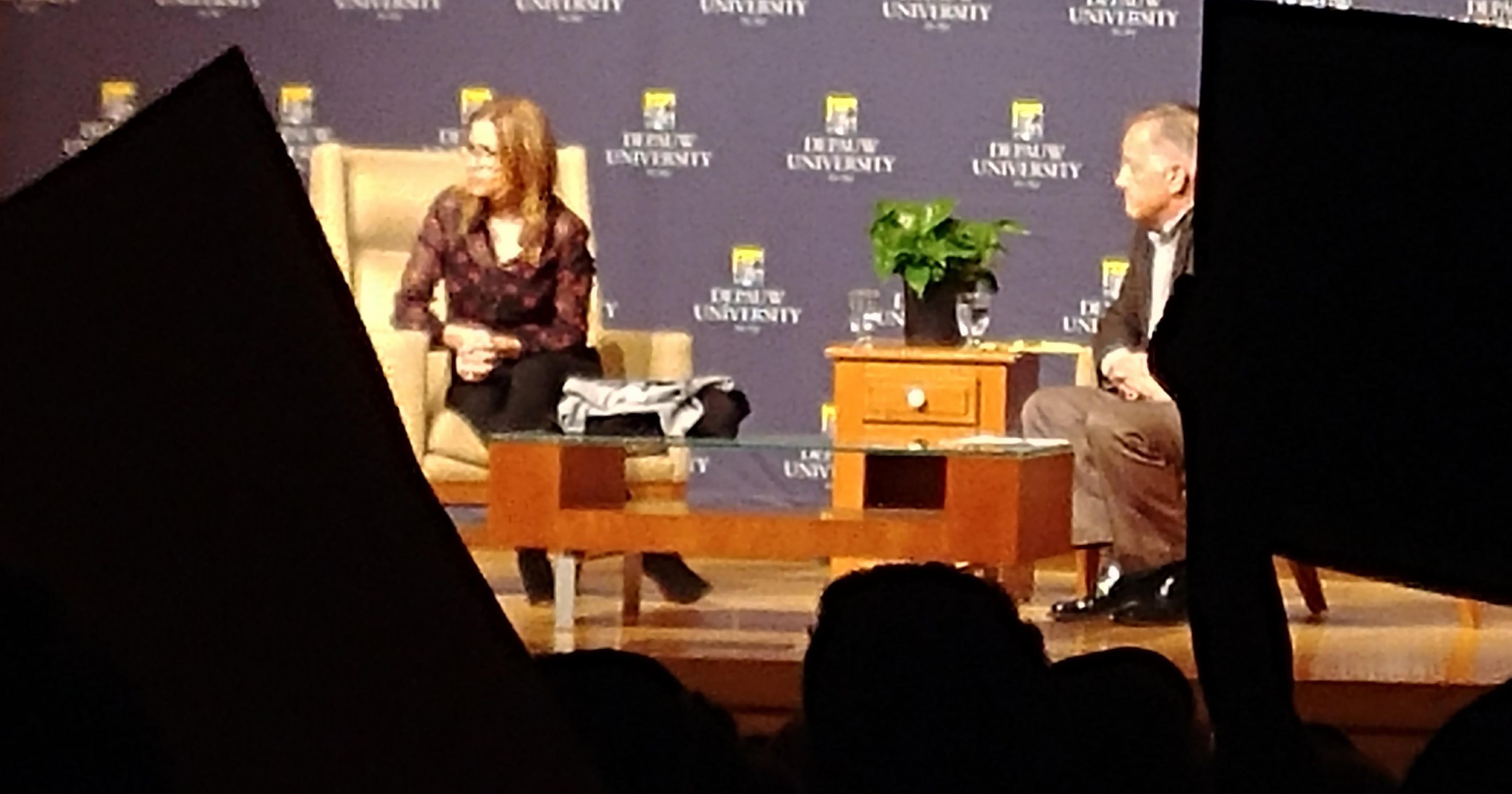 Racial, homophobic and religious slurs were found written in bathroom stalls at DePauw along with a racist message in a campus nature park, according to an IndyStar article. The protests that occured at Fischer’s event were a response to these incidents.

DePauw students used Fischer’s public lecture to convey their message nationally, chanting “We are not safe.”

Butler junior Courtney Irwin, human communication and organizational leadership & critical communication and media studies double major, was at the event with two other Butler students when the protests happened.

Fischer was told before the event that an interruption might happen, Irwin said, and a few minutes into the event, someone blew a whistle.

“It was like an emergency whistle, everything was quiet,” Irwin said. “Jenna looked out at the crowd and she called out ‘Hello?’ This was her being like, ‘This is the interruption.’ Students then stood up and started saying ‘We are not safe.’”

Irwin said she was very confused at first. Her friend, junior psychology major Morgan Peterson, thought it was a performance at first.

“I thought maybe it was an acting group on campus,” Peterson said. “Everyone started standing up in the rows, they were chanting that they didn’t feel safe. They went into the aisles, and we realized then that something was going on.”

One of the protesters started to explain why they were there and what had been going on around campus. There was some discussion between the president of DePauw who was moderating the event, Fischer and the protestors, Irwin said.

“Jenna said she was very touched, and she wanted them to take the moment to take over the space,” Irwin said.

Some audience members started clapping and taking pictures of the protestors, but they asked for them not to do so.

“It was very serious and something they didn’t want an applause for, they wanted it to be an expression of their feelings,” Irwin said. “They meant to express the fact that they were being overlooked. They made you confront that this is a problem and that they are not safe.”

After a couple minutes the protesters filed out, along with audience members as well. Fischer tried to continue with the original event, but it was clear the atmosphere had changed, Irwin said.

“After hearing about what was happening on DePauw’s campus, Jenna was like this is ‘really uncool’ she told the president,” Irwin said. “She was very clearly impacted, and she said it felt silly to talk about her favorite ‘Office’ episode now.”

All three of the Butler students said they were very emotional during the protests and once they heard the message they were really saddened because they knew the student protesters were coming from a difficult place.

“I had no idea this was happening at DePauw and we’re only an hour away,” Peterson said. “I thought we would have heard about it. I started to get really emotional. And from the students perspective it didn’t seem like the administration was doing anything about it, which made me frustrated.”

At first, Peterson thought the choice to protest at Fischer’s event was questionable, until they made national news.

“I think it was really smart because they were able to get that recognition that they deserve,” Peterson said.

Irwin said she was crying the whole time and the protestors were really intense.

“I was very impacted,” Irwin said. “I was like ‘Wow, this is something that’s really happening.’ I was heartbroken. I had never heard about it until then. They deserve to be heard and they have a right to be angry. It was very important to be heard, everyone deserves to be safe at school.”

Junior Caitlin Flowers, digital media production major, was also with Irwin and Peterson when the protests happened. Flowers said she could not imagine the incidents at DePauw happening on her own campus.

“I honestly think I’d be really devastated,” Flowers said. “It’s sad to hear about it at a different campus, but I think it would be so much worse going on at my campus. I hope I would help to try and make campus a safer place if anything like that did happen.”

Although Flowers said the protesters were really angry, she said Fischer handled the situation really well.

“Jenna tried to have a conversation with the protestors and ask what was going on, as best as she could,” Flowers said. “She knew that an interruption was going to take place, but she didn’t know the details or the extent of what would happen.”

Overall all three students were glad to have experienced it.

“It was really important and I am grateful I was there to experience that moment, and I do hope that things get better,” Irwin said.

A day after the event and protests took place, Fischer released a statement on Twitter.

“In light of last night’s events, using the full amount I was paid by the University, I will be making equal donations to the NAACP, The Anti-Defamation League, and The Trevor Project in the name of the students of DePauw University,” Fischer said in her tweet.

McCoy said DePauw public-safety personnel are investigating each of the incidents, according to an IndyStar article. McCoy and DePauw public safety are also looking to Greencastle Police Department, Putnam County Sheriff’s Office and the Indiana State Police to help assist with any future incidents.