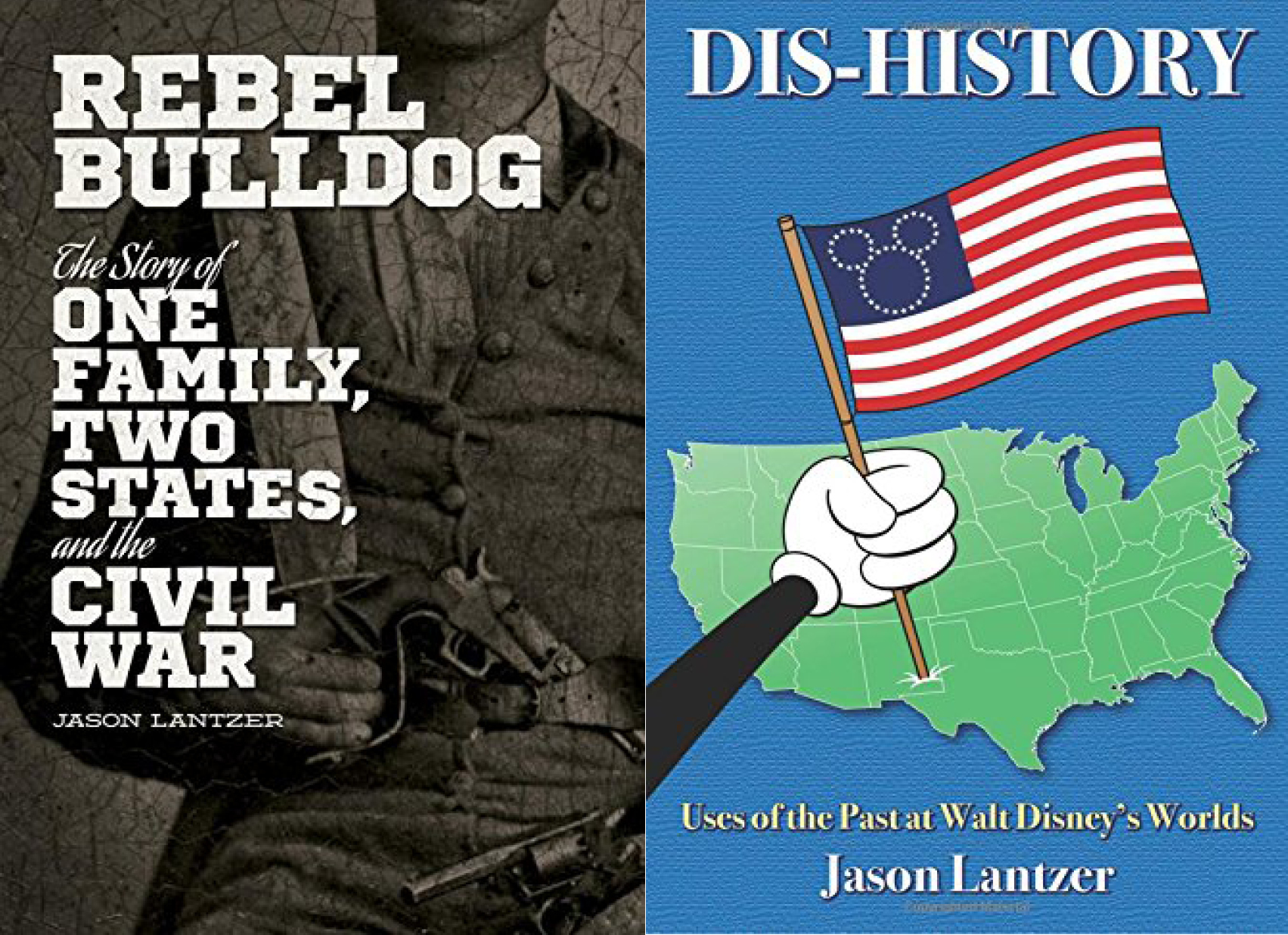 Lantzer’s books “Rebel Bulldog” and “Dis-History” were published after he taught courses at Butler on the Civil War and the history of Disney and American culture. Photos courtesy of  Amazon.

Lantzer has written and published two books during his time teaching at Butler. One is titled, “Rebel Bulldog: the story of one family, two states, and the civil war” and the other, “Dis-History: Uses of the Past at Walt Disney’s Worlds”.

Lantzer said “Rebel Bulldog” started because he had agreed to teach a class for the honors program on the civil war, but wanted to relate the class to Butler.

“I started digging and as I was kind of putting the syllabus together, I wanted to have the final project be current Butler students researching their historic peers,” Lantzer said. “We had a list actually, we had more than one list, of Butler students who had served in the war. So, I knew we’d have plenty of material.”

One of the students in their research found a Butler student named Preston Davidson that had served in the confederacy. Lantzer began his research on Preston and, by the end of the semester, had 100 pages of notes.

“His story had taken some very, very interesting twists and turns and so I knew that had to be a book,” Lantzer said. “And so I worked on that over the next couple of years and submitted that to the Indiana Historical Society Press Republication.”

Sally Childs-Helton, head of special collections in Irwin Library, helped Lantzer and his class with their research.

Childs-Helton said it was fortunate the Davidson family was very prominent and so heavily documented, more so than other Butler war veterans.

Kelsey McDougall, senior biology major, took Lantzer’s class during the time his book was going through publication. The class was titled, “What’s so civil about war: The Civil War.”

“In his class we focused on Butler a lot and, for our final project, we had to pick an aspect of the civil war and find a Butler or Indy connection to it or someone who went to Butler who was connected to the university and was impacted by that,” McDougall said.

McDougall said one of the books they read in the class was called “Affectionately Yours: The Civil War Home-front Letters of the Ovid Butler Family.”

When the “Rebel Bulldog” process was finished, Lantzer said he was trying to figure out what to do next.

Lantzer, at the time, was going on a lot of Disney World trips and his administrative specialist joked that he should write a book on Disney because he goes there so often.

“I decided to see if there was anything to it and I didn’t know what I would do, but while we were on a trip, I had some articles about Disney with us and as we were walking around…I suddenly started to figure out and think about how Disney uses history and folklore culture and how they use those to tell a story,” Lantzer said.

Over the course of about a year, Lantzer wrote his Disney book, “Dis-History.” It was published in September of 2017.

In spring of 2017, he taught a course on Disney and the American culture for the first time.

McDougall said Lantzer is a great professor and that she remembers his lectures were interesting.

“It was really easy to listen to him lecture,” McDougall said. “Usually in lectures it is easy to get bored, but how he went through his lectures he made sure it was engaging. He would even throw in some sarcastic comments, which was pretty hilarious.”

McDougall said she has not read Lantzer’s “Rebel Bulldog” book yet, but hopes to get to it soon.

There will be a book discussion and signing with Lantzer and Editor Ray Boomhower of the Indiana Historical Society Press at Irwin Library from 4 p.m. to 6 p.m., next Tuesday Feb. 6.