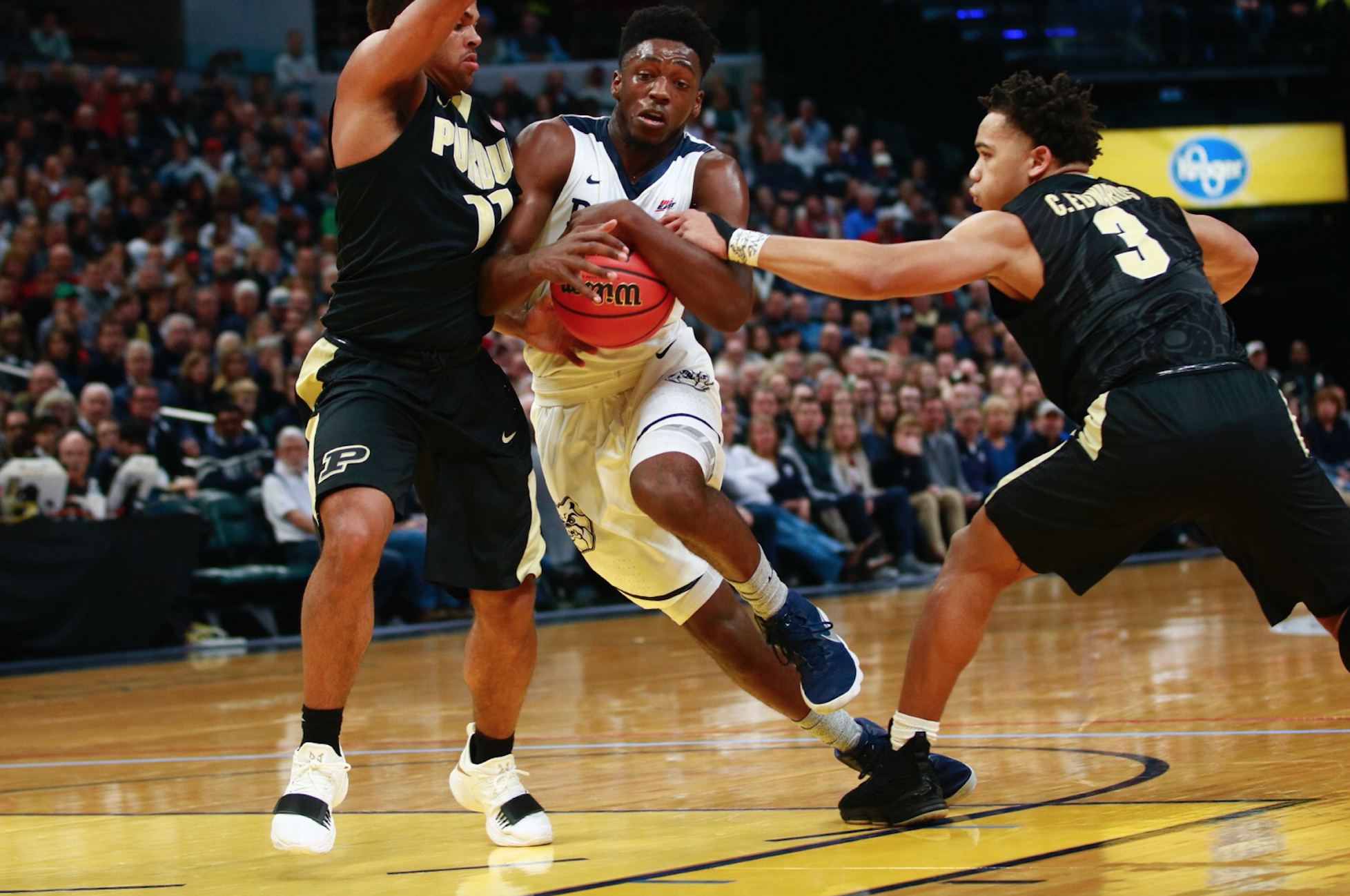 Kamar Baldwin attempts to protect the ball in the lane from Purdue defenders. Baldwin scored 13 points in the Crossroads Classic matchup. Photo by Jimmy Lafakis.

The state of Indiana is guilty of many things — calling lawn games cornhole instead of bags for one —and putting too much stock into a basketball game, specifically this one.

If all four basketball schools were going to converge under the roof of Bankers Life Fieldhouse, it was never going to be an annual series of games. It had to be the Crossroads Classic, a showcase of Indiana basketball at its finest — and Butler failed to display this against Purdue.

Until the last five minutes, that is. Butler became Butler, and Paul Jorgensen reached in deep for a three to put the game within nine points and oh my god, where did that 20-point deficit go?

And while it wasn’t enough, it’s the only reason why Butler lost by 15 points instead of 30.

Later, LaVall Jordan will try to carry some of the blame, the way all good coaches should, but most of the time don’t. This one did.

“That one’s on me,” Jordan said. “To just make sure we start games with the same mentality, with the same aggressiveness, and try to get the same quality on both ends of the floor that we did late.”

It was ugly. It was miserable for the fans, if Twitter is a barometer for these sorts of things. This was the Crossroads Classic, and fans had skin in the game, so neighbors and coworkers could rib each other they day after with “My school is better than your school.”

But mostly, it was a sense of ugliness that started with a Butler turnover in their first possession and persisted until the end of 20 minutes, when Purdue’s Ryan Cline sank a three to run out the shot clock. Like he’s been hitting three’s his entire life. Which would be fitting, because Cline was one of Purdue’s best in-state recruits.

There’s no sense of cockiness. Anyone who watched the game knows he doesn’t have to be.

Butler couldn’t hit the three against Purdue, and maybe they would’ve gotten away with it too, if Matt Haarms and Isaac Haas weren’t inside the paint swatting basketballs out of the air like seven-foot versions of King Kong.

There was the time Kamar Baldwin twisted through the lane, protecting the ball with his arms until he could reach out and — nope. Haarms was there to pluck the ball away, the same way you or I grab a can of beans from the shelf at the grocery store. So instead, Baldwin produced a game total five shots of 15 attempts.

They weren’t bad shots, Jordan said. Maybe a bit rushed. But not before he said what everyone in the room already knows: “Kamar is a really good basketball player.”

Yes, he is. We’re talking about the same guy who scored 19 points last game, remember? But playing Youngstown State isn’t the same as a nationally-ranked Purdue.

The shots weren’t falling for Baldwin. The problem is, they weren’t falling for anyone else either, to the tune of 37 percent from the field. And the numbers are deceiving, because it was just 21 percent in the first half. But it becomes salvageable when you average it with the 52 percent they were shooting in the last half.

But there was ugliness in the second half too. It actually only got worse before it got better, with Purdue leading by 26 with thirteen minutes left to play.

At one point, Kelan Martin got all tied up at the key with three Purdue players, their six batting arms forcing a turnover and twisting Martin into the ground. He was on the ground and watching Purdue steal another possession for what seemed to be the umpteenth time. Actually, it was the 13th. Butler would add four more turnovers before it was all over.

This was new for Butler. Butler, who takes pride in limiting turnovers. Butler, who had a 5-1 Crossroads record. Butler, who upset No. 9 Indiana last year, and did the same to a nationally-ranked Purdue the year before. After stringing three decisive wins after the Ohio State game, they were on track to be that team again.

It’s not a sin, putting too much stock into a basketball game, and the proof is inside a display case just outside section 215 of Bankers Life.

Old high school basketball letterman jackets, just old enough to be vintage, hang along the back. Even older than the jackets are black and white team photos, newspaper clippings and state finals programs that cost 25 cents because those were the good old days.

It’s a shrine to Indiana basketball, is what it is. Just outside section 215 and a few hundred seats above from where one Indiana basketball team is desperately trying to close a 20-point gap. They won’t succeed.