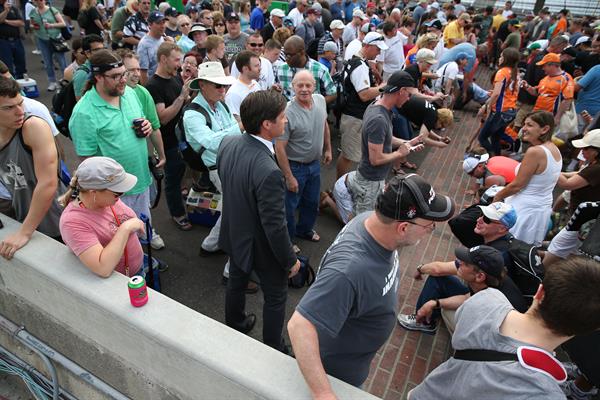 Doug Boles stands in a crowd of people at the Yard of Bricks at IMS. Photo provided by Indianapolis Motor Speedway.

It wasn’t until age 10 that Indianapolis Motor Speedway President Doug Boles’s father finally allowed him to go to the track. Once given the okay, Boles darted for the speedway. Now at age 50, he spends his life at the place he once looked upon with joy and curiosity.

Boles graduated from Butler University in 1988 with a degree in journalism, but his work didn’t stop there.

Boles spent as much time as possible at racetracks. He picked up trash, took license plate numbers and worked in the media center at fellow Indianapolis-area track Lucas Oil Raceway. He also visited IMS frequently.

Tom Davis, sports editor at the Fort Wayne Sentinel and longtime friend, said Boles always found a way to get to a racetrack.

“When we were in college, Doug would go over to [IMS] and knock on [IMS historian] Donald Davidson’s door at the office and just talk with him,” Davis said.

Heading into college, Boles, a native of Danville, Indiana, faced a tough decision: attend DePauw University or follow in his mom and dad’s footsteps and attend Butler.

“I grew up in a house where we went to Hinkle a lot, and a lot of my parents’ friends were Butler grads,” he said. “I was comfortable with Butler.”

Initially, Boles decided to go to DePauw. But a scholarship from the Butler men’s swim team changed everything.

If I’m not @IMS, there is not a place I’d rather spend a Saturday than Hinkle for @ButlerMBB! Go Dawgs! pic.twitter.com/O7NwW5YDr1

Boles moved to campus in 1984 and joined the now defunct Lambda Chi Alpha, where he eventually became president. He swam for three years until his senior year when class and swimming conflicted too much.

When he stepped onto campus his freshman year, Boles thought he wanted to follow a pre-med route and later attend medical school. He soon realized that wasn’t for him and pursued journalism, where he could merge racing and writing.

Boles said one advantage Butler had was it allowed him to seek out his passion whenever he wanted, both on and off campus.

“With March tire testing, you can hear cars at Butler if the wind is right,” he said. “Literally, if I knew people were testing or I could hear people testing, I would come out and sit in the [IMS] museum parking lot and study for tests, read and do all that stuff just to be around the racetrack and see what was going on.”

Still, Boles was trying to find what exactly he wanted to do. So he followed another passion: politics. Boles applied to be a public information officer at the Indiana Statehouse, and he got the job. But, there was a problem.

It started the week before the Indianapolis 500. He spent all month working as a freelance photographer for the Associated Press, and he wanted to shoot the big race.

“I said, ‘Look, I am not going to [start the week before the race], so that mean’s you have to hire somebody else,” he said.

Fortunately for Boles, they worked with him, and he worked at the Indiana Statehouse for two years. In 1992 he began working for Indianapolis Mayor Stephen Goldsmith.

Boles was Goldsmith’s director of governmental and corporate affairs. Eventually, Goldsmith let Boles bring his passion to work, and they created the Motorsport Task Force with hopes of bringing motorsport businesses to Indianapolis.

But he missed being at the track.

He had several friends who were also passionate about racing. With that in mind, he left Goldsmith’s office to start an IndyCar team, Panther Racing, in 1997.

Boles was chief operating officer for eight years, a span that saw the team earn IndyCar championships in 2001 and 2002 with Sam Hornish Jr. He left the team in 2006.

Four years later, he started working at the place he visited all the time while at Butler: Indianapolis Motor Speedway. He was hired as vice president of communications in 2010.

In January 2013, it was time for a change. After a meeting with then-president Jeff Belskus, he was promoted to chief operating officer.

“I think Jeff knew at the time that, he had been here for almost 30 years, he was ready for something new,” Boles said. “So, I think to some level, his idea was developing a successor.”

Later that year, in May, Boles met with Mark Miles, CEO of IMS parent company Hulman & Co., where Miles told Boles he was being promoted to track president.

“In the fall of 2010, I would not have pictured where I am today as what I would end up doing here,” he said. “They are a family-owned company, and historically a family member led the organization. I don’t think I realized this could be an opportunity for me until the very beginning of 2013.”

Davidson, who has been the IMS historian since 1988, said Boles’ popularity has to do with the fact he started as a fan.

“He has endeared himself to fans because he gets it,” he said. “He knows what it’s like to be a fan. He is one of the best people for this job.”

Boles doesn’t just mingle with fans on test days. During race weekends, you can find him in the stands thanking fans for coming, and he will even call those who renew tickets and thank them for continuing to come back.

“He’s always got the fan in mind, because he was one and he still is one,” Davidson said. “It’s an interesting dynamic he has going.”

While this has made Boles a familiar face, it might be his suits that are more known than he himself.

On any given day, whether it is the Indianapolis 500 in May, or the Brickyard 400 in July, Boles always wears a suit.

“I just believe the brand deserves it,” he said. “ I know we’re 108 years from when it was founded and the world has changed a little bit, but for me, if I’m representing the brand, I want to represent it in a way that shows respect to the history of it.”

It’s a little windy, but that doesn’t stop @IMS President @jdouglas4 from engaging with fans in the Turn 2 mounds. pic.twitter.com/LDf3XcRh0O

“And that’s why when it’s 100 degrees on race day, I’m the guy outside in a tie sweating my butt off. But at the same time I’ll walk alongside the guys picking up trash in it and help them.”

Davis, who was a fellow Lambda, swim teammate and even shares the exact same birthday, said he isn’t shocked that Boles reached this level.

“It’s not super surprising at all,” he said. “Even at 17, he had a passion for motorsports and knew that whatever he did, it needed to connect in some way to motorsports. In addition, he is a very driven and focused individual with a very high intellect.”

Everything Boles did in life, he did it with racing in mind; whether it was his choice of school, a job that gave him free time on the weekends or a job that let him be at the track, Boles knew racing needed to be in his life.