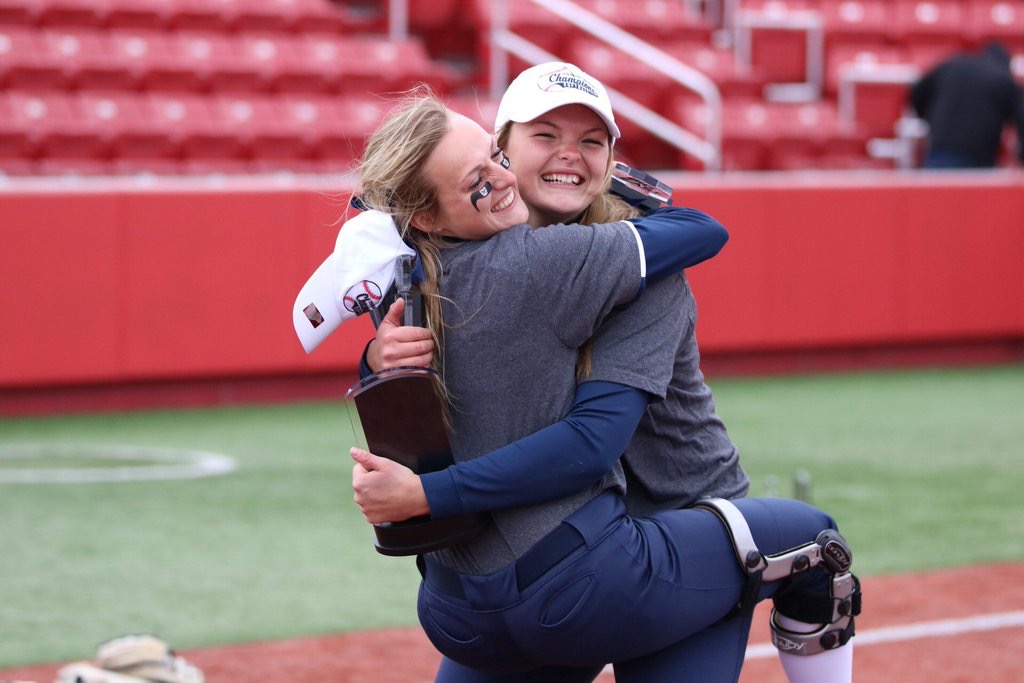 Kaitlin Doud steps into the batter’s box. Her heart pounds, but her confidence surges. She taps the plate with her bat. She has done this before. She put in the hours. Only one step remains: execution.

She just helped the team.

Doud, a sophomore on the softball team, is listed as an infielder/pitcher. But she said she is more than willing to field any position on the diamond. She played first base and shortstop and pitched last year.

The Bulldogs started off their their season 3-2 in Rosemont, Ill. this past weekend. Doud played second base over the weekend.

“Wherever the team needs me, that’s where I will be,” Doud said.

Doud started playing softball when she was eight. She said she loved watching the game growing up and dedicated herself to her craft from that young age.

“I’ve loved softball since I joined my first travel team,” Doud said. “I’ve always done it for my love of the game, and it’s always been important to me to take pride in what I do.”

Wendy Doud, Kaitlin’s mother, said she realized her daughter’s future after a coach predicted it.

“Her basketball coach said softball would be her ‘secret weapon,’” Wendy said. “I knew she loved it. She was always in the backyard practicing hitting and pitching with a bucket of balls.”

Doud hails from Portage, Ind. She played basketball and softball for Portage High School and was named a 2015 Indiana All-Star. She was also tabbed as the Times of Northwest Indiana’s 2015 Female Athlete of the Year.

Wendy said she is proud of her daughter’s individual accomplishments, but one achievement will always stand out.

“When Portage won the state championship in 2013, it was such an exciting time,” Wendy said. “We were the underdogs. No one saw us coming.”

Kaitlin concurred with her mother. She said that 2-0 win over Franklin Central High School will go down as one of the most memorable contests of the hundreds she has played.

“I always grew up around good competition,” Doud said. “That game was so special because we achieved what we had worked for.”

Doud led Butler in home runs, runs batted in, total bases and finished second on the team in batting average during her freshman campaign. She had six home runs, 41 RBI and 83 total bases.

While at Butler, Doud developed a special bond with outfielder Jenna Foreman. The two sophomores have roomed together during their first two years of college and plan to live together for their next two.

Doud said spending her first season and winning the Big East championship with her best friend were unforgettable experiences.

“She’s so special to me,” Doud said. “No one else gets my humor like she does. We jumped in a fountain together, which really shows that we are best friends.”

The teammates met at a Butler softball camp during their junior years of high school. It did not take long to decide who their college roommate would be. How long?

Six minutes, to be exact.

“We go together like peanut butter and jelly,” Foreman said. “When no one else is laughing at my jokes, I know I can count on her to chuckle.”

Foreman said Doud inspires her on and off the field. She said she admires her teammate’s ability to play different positions.

“I have always seen her desire to get better,” Foreman said. “It takes something special to have an attitude like hers.”

Head coach Scott Hall said he recruited Doud because of her competitive nature. Doud said that Hall met with her outside of practice to tweak her swing. She worked on using her legs for more power and getting inside the ball, which means she will get on the plane of the pitch for a longer period of time. He said she is dedicated to making the team better.

“She does so much for us,” Hall said. “I would much rather have her on the team than coach against her.”

Hall mixes and matches different lineups in the early non-conference games. The coach said he hopes Doud will be a fixture in the Bulldogs’ lineup, no matter where she plays in the field.

“She takes on whatever role we need her to,” Hall said. “We expect her to hit in the meat of the order all year long. I’m just glad she is a Bulldog.”

Sophomore infielder Cheyenne Thompson grew close to Doud last year. Thompson and Doud became “throwing buddies” and warmed up together before every game. She said her teammate will always compete hard for Butler.

“You can see it in her eyes when she steps in the batter’s box,” Thompson said. “She has the mindset that she will win every single at-bat. That comes from her natural desire to win and compete no matter what.”

Doud said she will do everything in her power to reach the next goal on her list: an NCAA tournament win for the Bulldogs.

“I enjoy challenges,” Doud said. “I want to stay determined. I want to be fearless out there.”