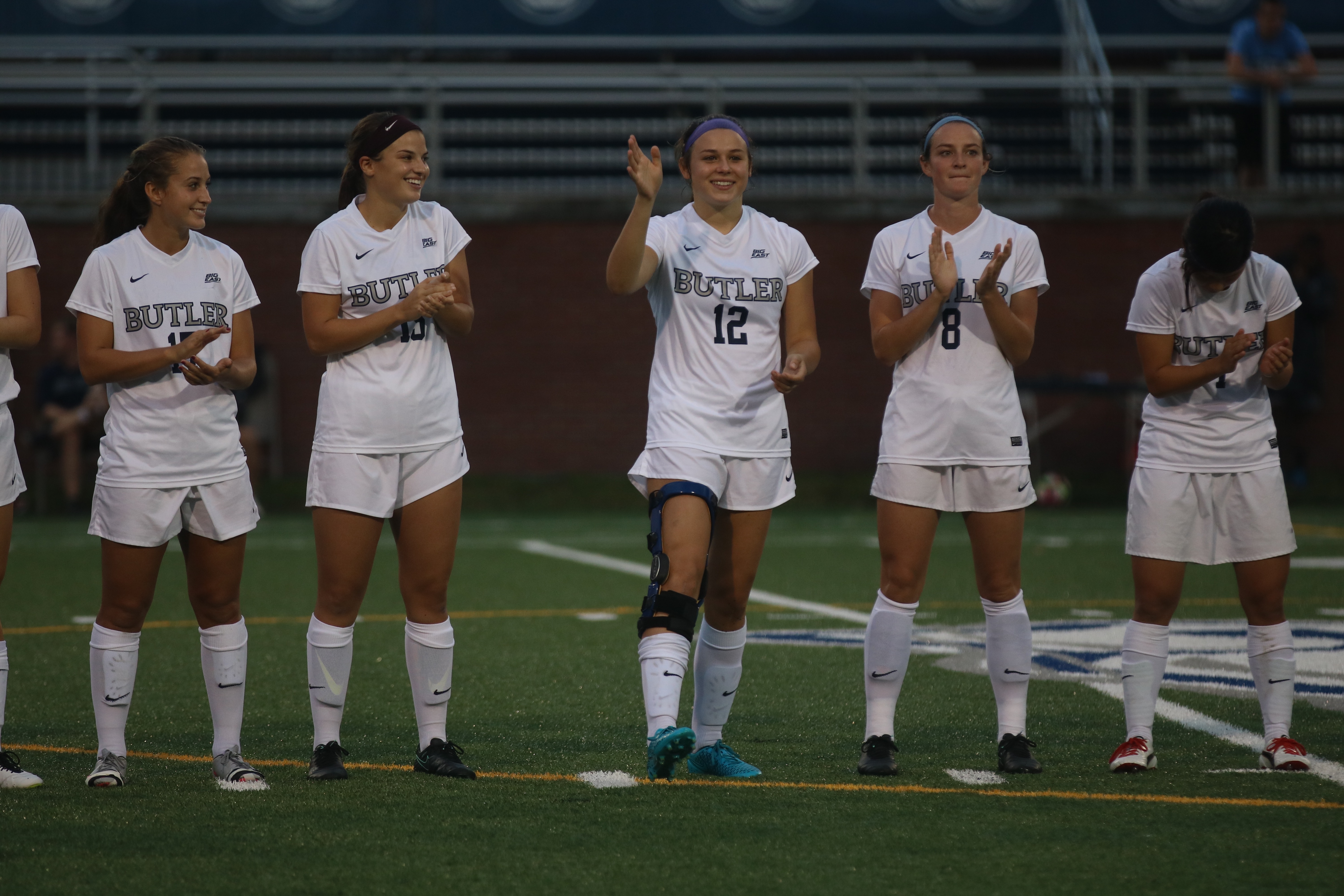 Three and a half years ago during a high school soccer game, Halle Stelbasky tore the tendons in her knee — the ACL, MCL, PCL and meniscus. Shortly after the injury, current Butler sophomore Stelbasky met with Butler women’s soccer co-head coach Tari St. John to discuss her athletic future.

Jokingly, St. John told Stelbasky she had some catching up to do—uncrossing her legs, St. John revealed scars on both knees. Two and a half years later, Stelbasky caught up—she tore her right ACL in the final game of regular season on Oct. 30, 2015.

“I was having weird feelings something was going to happen and my knees were bothering me,” Stelbasky said. “I was only going to go in if we needed a goal, and we did. We got the goal, but a few minutes later, I tore my right ACL.”

Three weeks later, she underwent surgery to repair the damage. In July, Stelbasky’s knee was bothering her again. She underwent a third surgery to remove scar tissue from around her ACL, prolonging her recovery even more.

“My motive is to let Halle and all my athletes know it is okay to be hurt,” St. John said. “Halle actually gained a few attributes to her game post her first ACL tear—she is a threat behind and in front of defenses.”

Throughout last season, Stelbasky scored nine goals and played nearly 90 minutes in every game. This season, she first stepped on the field against Indiana University on Aug. 26. She has played 14, 14, 28 and 17 minutes, respectively, in the four games in which she has played.

After going 10 months between games, getting back into soccer shape played a role in her comeback. She credits the women’s soccer athletic trainer Mike Howell with helping her build her strength and endurance back up.

Sophomore forward Halle Stelbasky is introduced during her first game back on Aug. 26 against Indiana University. – Photo by Jimmy Lafakis

“Mike worked with me everyday in the spring, helping me get stronger,” she said. “He inspired me to work my hardest.”

Along with getting physically in shape, Stelbasky still finds herself struggling with the mental aspect of the game she loves.

“I just want to go out there and be able to be myself,” she said. “In soccer, you get the ball and not think about it at all, it just comes to you.”

Along with St. John and Howell, Stelbasky also has the support of her teammates, including junior goalkeeper Elizabeth James, who had six significant knee injuries.

“Halle means a lot to me, because I see parts of myself in her, and I know firsthand the physical and mental struggles she’s faced and is still facing,” James said. “I’ve tried to put things into perspective for Halle so she can see that while soccer is incredibly important, who she is as a person is even more important, and that’s where I hope she can find her value.”

Despite her large role in the team’s success last season, Stelbasky’s goal for the first half of the season is to get back into the swing of things and feel relaxed on the field.

“I just want to play a part in some way—it doesn’t even have to be a goal,” she said. “I’m just excited to be back out there.”