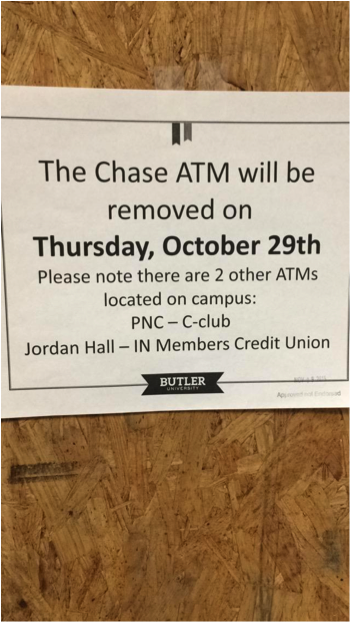 Sign hung where the Chase ATM was previously. Photo by Kristin Camiliere.

“We came to the end of our agreement term; Butler was prepared to renew but Chase made the decision that they didn’t want to renew,” Bruce Arick, vice president of finance and administration, said.

Arick said Chase removed the ATM because “the machine didn’t do sufficient minimum volume of transactions to justify the cost of having it installed in the location.”

Some students said they are inconvenienced by the hassle.

“It’s kind of annoying that they took out the Chase ATM,” first-year student Sehr Ahmed said. “If I ever need cash now, I can’t take it out here, so it’s kind of a hassle for me because I have to find somewhere else to get cash.”

The ATM closing caught some students off guard.

“ I was pretty surprised when they closed it,” second-year pharmacy student Matthew Glad said. “When I saw the sign I was like, ‘Really?’ Now I have to drive to make a deposit and a withdrawal.”

Butler is not planning on replacing the ATM with another bank, so students who bank with Chase can find an ATM at 5635 N. Illinois St. or 5675 Michigan Road.