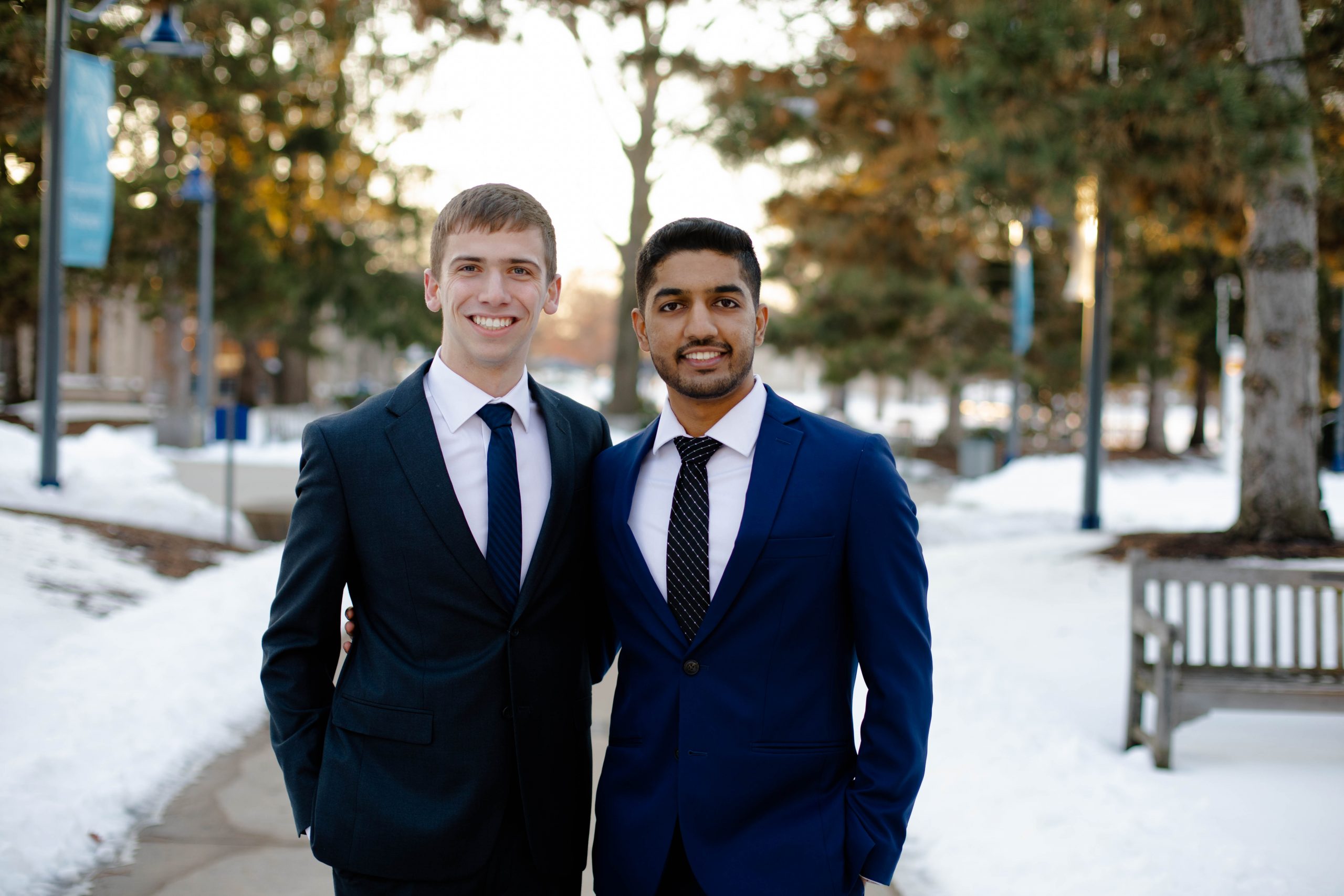 Chezem and Patel were interviewed together and their responses reflect who answered the question.

Cade Chezem and Meet Patel won the Student Government Association presidential election on Feb. 23 with 64.21% of votes against Paul Ford and Rami Daas. Chezem and Patel ran on a platform of three pillars: student life improvement, revitalization of campus traditions and holding the university accountable.

Chezem and Patel will officially take office on April 18. The Butler Collegian sat down with both Chezem and Patel to discuss what they plan to do in their newly elected roles.

The Butler Collegian: How are you planning on conversing with constituents and understanding what their needs and wants are?

Cade Chezem: First of all, increased collaboration with the Senate. So, you know senators are elected to represent a constituency, so they’re really out and about doing a lot of that work, not that we won’t be. Also within our administration, we’re gonna create a director of student engagement, which is a cabinet-level position whose sole goal is to be out there, collecting feedback and reporting back to us weekly about concerns they’ve heard. This way we can act on those whether it’s talking to the university and saying, ‘Hey this is what we’ve heard this week and this is what we need to do better.’ So I think we want to emphasize that we’re going to have office hours where students can come in. Ideally, we want to go to the students, that’s where the community outreach and a lot of our efforts are gonna be focused on, especially with the director of student engagement, but we also know that we also want students to know that we’re able to give that time into office hours and other opportunities where we’ll try to be on campus and make sure that students know they can come up to us and talk to us.

TBC: How do you plan on holding the university accountable through your position?

CC: I’ve already been able to, you know, really create working relationships with a lot of senior-level administration of the vice president level, executive directors all over campus, and deans of colleges, not just my college, but various colleges across campus. So we’ve got some of those working relationships already. And so we can really use those to hold them accountable. And, [say to senior-level administrators] hey, we’ve heard this and you’re not acting on it, well, is there a reason why, what can we do to better support you? And then being transparent is the biggest part of that accountability. So we are going to be transparent to the student body and show them that we’re not only making these decisions but show the thought process behind decisions that we’re making.

TBC: How would you define transparency within the context of SGA? How are you going to reach students who come in and might not know what SGA is?

Meet Patel: So I think [the] major focus should be just explaining the role of SGA on campus and some of the things the Student Government Association can offer to the students and this is something that I need to admit that we need to think more on. We don’t want to come off as we have everything figured out. Like we have a lot of things to still consider and keep brainstorming in terms of what students might benefit from. Our job will be to kind of point some of these things out to make sure that this is what the Student Government Association has done in the past and viewers have the things that you can expect from us. And this is the role of being out on campus to kind of be the voice for students and enact change that can ultimately benefit.

TBC: What are some specific ways you hope to improve diversity, equity and inclusion on campus?

CC: We really had a few different things that we wanted to incorporate. The first is open DEI training. So outside of DEI training for SGA, we think it’s important that even like Greek organizations or student organizations on campus can come [to DEI training] because they have a requirement or whatever it is. [Just] being able to provide it with free access or equitable access to all students on campus. We also just want to be an ally for students. We want to end the elitist stigma that is SGA, making it a welcoming, inclusive environment. We want to support and provide education and resources to those [student] organizations, especially with SGA grants.

TBC: Many past administrations have cited mental health concerns as a priority during their time in office. What do you think is most important when it comes to providing students with sufficient mental health resources?

CC: We don’t want to reinvent the wheel. [Past SGA] administrations have already taken great steps, and that’s something that we want to expand upon. We want to take all the mental health feedback we’ve heard from students and continue to gather more. We’ve had more access to [Counseling and Consultation Services] and off-campus care centers. We’ve had more access to education and resources about mental health and the mental health crisis on this campus especially. I’ve got to go back to our university accountability pillar. The administration recently sent out an email that they’re working on new mental health resources, something called Preventia. It’s like a telehealth service kind of as a supplement to CCS. It’s our responsibility and duty to kind of make sure that this is followed up on like it’s supposed to. We want to make sure that whatever the university promises and offers to students, not only will students know about it, but they are supported and using it.

CC: We are going to start with the beginning of next semester. One of those is civic engagement. This is the biggest obstacle we want to tackle. This is a great opportunity at the beginning of the first semester to go out and work with different nonprofit organizations, different service opportunities through the Indianapolis community, and really because it’s a great opportunity for Butler to do that as a whole. Homecoming traditions are a huge one. Homecoming is a vital part of this campus and the campus culture. We want to bring back some traditions, Yell like Hell, and things like that that we haven’t seen, partially because of COVID but also partly because people haven’t been able to put in the work to get those done.

MP: I think they’re very important for students, especially incoming students who have a perception of what it means to be at Butler and to be a Bulldog. A lot of them have heard stories from like family or alumni or friends that have attended our campus and they’ve heard of these traditions and when they come in, they look for this environment, they look for certain opportunities to get involved, and we feel that some of these have kind of declined over the past couple years. Of course, a pandemic plays a role and that’s something that we can’t control, but we can control being deliberate about bringing some of this back.

TBC: How do you see your past experiences with SGA helping you in trying to take on new roles?

CC: I think the biggest thing is just knowing how the internal SGA operates. We need to know how all internal processes work to ensure that we’re actually performing efficiently. And so making sure we’re getting all the projects done efficiently, we can’t just do something without Senate approval. We know how to work with other branch leaders and things like that.

TBC: What are some of the main obstacles that you either think will be in your way or problems that you are anticipating as the new president and vice president?

MP: I think the first thing is just getting to know our roles [and] being able to actively listen to the student body. SGA needs to be the bridge between the university and students, not necessarily SGA being seen as an extension of the university. I don’t think I would call this an obstacle but it would certainly be a challenge to build cohesiveness within SGA. It’s all going to be about how we can ensure that there’s trust in the entire chain, not just within the branches themselves.

TBC: What is your main goal during your time as President and Vice President?

MP: So, I mean, one of the things we talked about during our campaign, none of those things are going away. I recently read a Collegian article about what students want in a candidate and what they want them to do. They want people to hold onto [their] word, and that’s exactly what we’re planning to do.

This interview was edited for length and clarity.