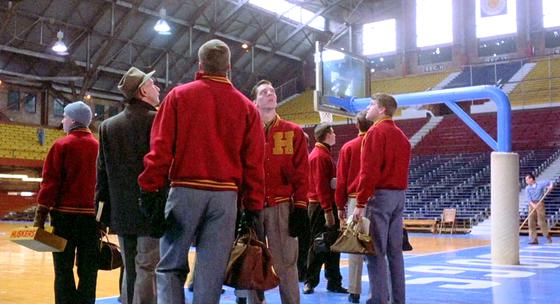 The Hickory men’s basketball team steps into Hinkle for the state championship game in the movie “Hoosiers.” Photo courtesy of Cinema Romantico.

As the Butler basketball regular season begins — Nov. 9 against IUPUI for the men’s team and Nov. 10 against Indiana for the women’s — one can get excited by watching the most entertaining, funny or inspiring basketball movies. Ranging from the most ludicrous comedies to powerful underdog stories, basketball movies, and sports movies in general, everyone can relate to these picks.

Here are five specifically curated basketball movies, from comedies to the more serious stories, to keep Butler basketball fans occupied whenever there is an away game.

“Space Jam” is a movie that nobody could have ever expected: an ankle-breaking crossover that combines the greatest basketball player of all time, six-time NBA Champion Michael Jordan, with the lovable Looney Tunes universe. Although a standard family-friendly comedy with familiar faces, “Space Jam” stands out for its use of half live-action, half animation effects that sets it apart from other light-hearted movies. It is also very bizarre to see many fan-favorite professional players in this setting; Larry Bird, Muggsy Bogues, Patrick Ewing and even Charles Barkley make appearances. The cinematography is unique, and Bugs Bunny’s performance, both as an actor and an athlete, is truly unforgettable.

John Cunningham, a first-year accounting and international business student, enjoyed growing up with “Space Jam,” as well as basketball in general.

“‘Space Jam’ is a big part of my childhood because it encompasses two specific genres that I enjoyed, both basketball and Looney Tunes or cartoons in general,” Cunningham said. “Seeing Michael Jordan break the ankles of the Monstars and Bill Murray draining a [three-point shot] in the final seconds of the game, draws me into the movie because it brings in icons of the entertainment and sports worlds that I grew up watching.”

Ultimately, love it or hate it, “Space Jam” is a classic. It truly is one of those movies that has made its mark on history and still is an ever-present cultural icon. Although this film was remade in 2021 with the league’s current star LeBron James, the original still remains a titan in the realm of basketball cinema.

“Teen Wolf” is an often-overlooked movie from the 1980s that is also often forgotten as a basketball movie. Once Michael J. Fox — of “Back to the Future” fame — undergoes his initial transformation into a werewolf, the best place to use this new power proves to be on the court, as he helps lead a disgruntled and downtrodden high school team to success. There are consistent laugh-out-loud moments throughout, and there are the ever-prevalent teenage clichés weaved in — after all, it is an 80s movie — making it stand out in comparison to other sports and teen comedies. It’s a touching story about underdogs, team spirit and morality, especially in the ending scenes. “Teen Wolf” has players of all ages wishing dearly for a full moon, so they too can unlock their true lupine potential on the court.

Although sports documentaries seem to be quite commonplace, with notable ones like ESPN’s “The Last Dance” becoming mass cultural successes, “Hoop Dreams” is the genre’s magnum opus. With an epic runtime of two hours and 51 minutes, this film is able to navigate the lives of the two high school-age protagonists, William Gates and Arthur Agee, as they try and achieve their dream of future success in collegiate and — hopefully — the professional leagues. Filmed over the course of five years, each boy’s path is tracked, depicting the social context, family matters and highlights from the sport. The film also transcends the clear main plot of basketball; it provides perspective into the social, political and cultural circumstances of its time period. It is an entertaining, informative and even introspective reflection on the difficulty of achieving the highest level of success in one of the most competitive sports on the planet; however, Gates’ and Agee’s desires make for a touching and inspiring documentary.

If “Die Hard” is a Christmas movie, then “Uncut Gems” is undoubtedly a basketball movie. Revolving around the fast-paced world of sports betting and jewelry culture, this film is a stressful watch indeed: but performances by Adam Sandler — who finally takes a dramatic role and succeeds — as well as Kevin Garnett, an NBA Hall-of-Famer, elevate this movie to another dimension. A comparison to be made to express how truly stressful a watch “Uncut Gems” really is would be to say that it matches the anxiety of watching an overtime game against a much stronger team. The high intensity is something unlike any other basketball movie, and the main game that is bet on is an NBA playoff game, so the argument that this movie is a basketball movie is sound.

First-year marketing major Austin Hart said “Uncut Gems” is a film that keeps viewers on the edge of their seats.

“‘Uncut Gems’ is great at making the viewer anxious because of its wonderfully portrayed protagonist,” Hart said. “Adam Sandler’s character makes for an entertaining display of greed in his distorted pursuit of the American dream. The movie also does well at showing just how great Kevin Garnett is.”

“I thought [“Uncut Gems”] was a really cool movie just because it was so fast-paced and really captured the lifestyle of the main character,” Fardig said. “It was super stressful because it literally never slowed down.”

Although highly different from all the other movies that are found on this list, due to its untraditional take on the sports genre, “Uncut Gems” is a must-watch for sports fans and movie fans alike. It certainly is a movie that will linger in your head long after the credits roll due to its anxiety-inducing soundtrack, hectic cinematography and high-stakes action.

Years before “Rudy,” David Anspaugh directed a massive success of a sports movie and the definitive basketball movie: “Hoosiers.” This movie gave a rise in popularity and attention to the magic of Indiana basketball, and it even has very close ties to Butler University itself.

Graham Honaker, executive director of Butler advancement, reflected on his experience with “Hoosiers,” a movie that he has said to have seen a million times. Regardless of the hyperbole, Honaker is quite familiar with the film.

“‘Hoosiers’ ranks as the greatest sports movie of all time,” Honaker said. “It embodies what Indiana basketball is all about and reminds us that David can beat Goliath. ‘Hoosiers’ and Butler are forever tied together. The Milan Indians, the inspiration for the film, were coached by Marvin Wood — a Butler graduate — and Bobby Plump, a star player who later attended Butler. It’s fitting that the film’s climactic scenes were filmed in Hinkle Fieldhouse: the ‘Cathedral of Indiana Basketball.’”

What Honaker said about the movie and its roots in both Indiana and the Butler campus makes “Hoosiers” a legendary film indeed. It is not only an underdog story, but it is a story about personal values, team ethics, overly intense high school basketball fans and ultimately, the reward for working hard and working with a moral code. The story can apply to far more than basketball because of the morals it teaches, and in addition, has an unforgettable performance of Coach Norman Dale by Gene Hackman. Anspaugh then went on to direct “Rudy,” also one of the greats among well-known sports stories. “Hoosiers” is what Butler Basketball is built on, and has a great history rooted in our campus: making it perfectly fitting to culminate this list.

That is it for the top picks for basketball movies with which to start the Butler season. Whether you are in the mood for a “Space Jam” or “Teen Wolf” style comedy, or something inspiring like “Hoop Dreams” or “Hoosiers,” there is a basketball movie for every occasion. And when you are not watching these films, be sure to check out a game or two at Hinkle this season.