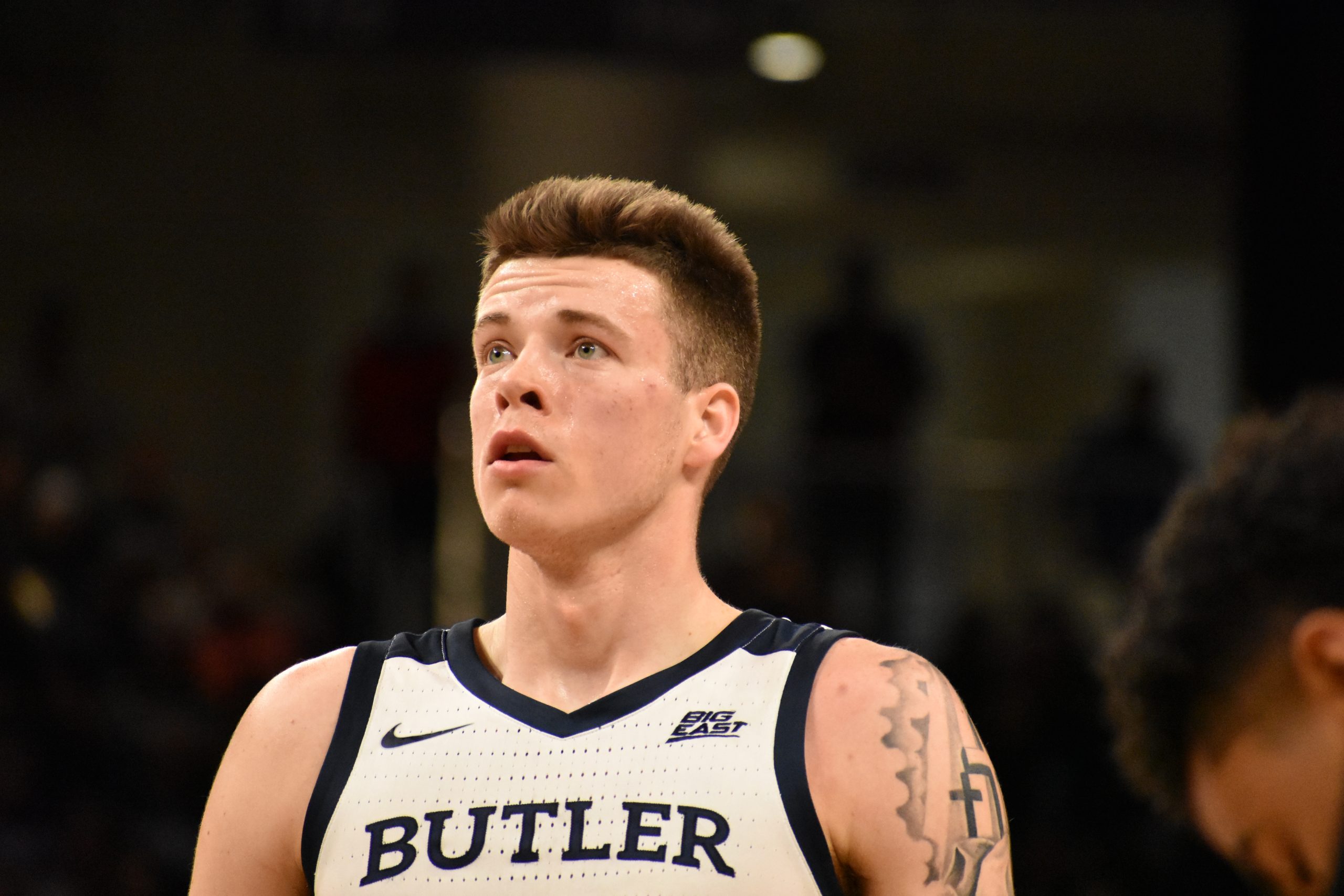 Sean McDermott shoots a free throw against DePaul on Jan. 18. McDermott had two points on 1-of-11 shooting in Butler’s loss to Villanova. Photo by Donald Crocker / Collegian file photo.

The Butler men’s basketball team only turned it over five times against Villanova. They also forced the Wildcats into 38% shooting and 36% from beyond the arc. Usually, that gives basketball teams a chance to win on the road.

Not the case this time — not even a chance.

The Bulldogs fell to the Wildcats 76-61 on Jan. 21 for their third straight loss. They are now 15-4 on the season and 3-3 in Big East play. In the loss, Butler held Villanova’s leading scorers, Collin Gillespie and Sadiq Bey, to 8-of-29 from the field and outscored the Cats by 10 in the paint.

Kamar Baldwin led all scorers with 21 points on 9-of-21 shooting, and the interior presence of Bryce Nze and Bryce Golden produced 22 points and 14 rebounds. Villanova’s Jermaine Samuels and Jeremiah Robinson-Earl combined for 32 points and 21 rebounds, and Samuels went to the line 10 times.

We go beyond the box score to detail why Butler never had a chance to steal a win on the road, despite Villanova’s low shooting percentages and the Bulldogs turning it over just five times.

1. Free throws and rebounds were killer for Butler.

Butler lost this game by 15 points. They gave up 70 points for the third game in a row and almost broke their season record for points given up in one game again. So, how did it happen despite Villanova shooting just 38% from the field? The same reason Butler never had a chance against DePaul: free throws. The Bulldogs sent Villanova, a top 10 free throw shooting team in the country, to the line 23 times and they knocked down 91% of them. On the flip side, Butler got to the line just eight times all game and only knocked down four of them. There’s a 17-point difference.

Of course, it isn’t as simple as just deciding that Butler would’ve won the game if those stats didn’t favor Villanova by more than 15 points, but the point is still the same. Butler played solid defense and forced the Wildcats into taking tough shots, but they gave up 11 offensive rebounds and sent an elite free throw shooting team to the line 23 times. It’s really hard to win when that happens.

2. Sean McDermott really struggled. And some thoughts on the offense.

There are days that teams have a really strong game plan for Sean McDermott. Teams do a good job switching screens, bumping him while he runs off corners and not even giving him a chance to shoot, much less get an open shot. That was not the case tonight. McDermott was just 1-of-11 from the field and 0-of-7 from the 3-point line and it was hard to watch even as he got good looks early. At least five of his 3-point attempts were good looks and he was missing them every which way — off the backboard, long, short and offline. He had a tough game on a night when Butler really needed some sort of spark behind Baldwin’s 21 points.

Golden and Nze were solid. They had two of their better games in Big East play, but the production just wasn’t enough. Butler wasn’t getting to the free throw line and had no rhythm in the halfcourt against Villanova’s improved defense. The opportunities were there from beyond the arc with enough consistency that the Bulldogs would have been in this game late if they could just knock down a few of them. Butler’s efficiency on that end of the floor has been really poor at times in Big East play — they are ninth in efficiency at KenPom in conference play. When you’re handing the opponent 20 free points at the charity stripe, the offense has to be better.

3. The hill to climb to a Big East regular season title is very steep at this point.

In about seven days, Butler has gone from the frontrunner in the Big East, to three games behind Seton Hall who sits at 6-0 in conference play. Five of Butler’s next seven games are at home, so there’s no need to panic. But with each loss, Butler’s chances of winning the conference get a little bit worse. They’ve already lost to DePaul, something that Villanova and Seton Hall — two of the three teams in front of them — didn’t do. And they missed a chance to stay a step ahead of the Pirates by losing to them at home. Not to mention Seton Hall has played four of their six Big East games on the road and now get to play three straight at home.

This isn’t a commentary on Butler’s tournament status. Sure, they aren’t anywhere near a one seed now, but they won seven games against Power 5 teams in the nonconference. The Bulldogs will still finish at .500 or better in conference play and easily make the tournament. However, this team is good enough to win this conference, but the last week has put them in a really tough spot if they want to make it happen.

One of these days, Butler will stop hacking jump shooters. And, at the very least, they will start fouling them hard enough that they don’t also make the shot. Butler’s foul problems the last three games are not just a result of poor officiating, but also a result of unintelligent decisions on the defensive end. And it needs to stop soon.