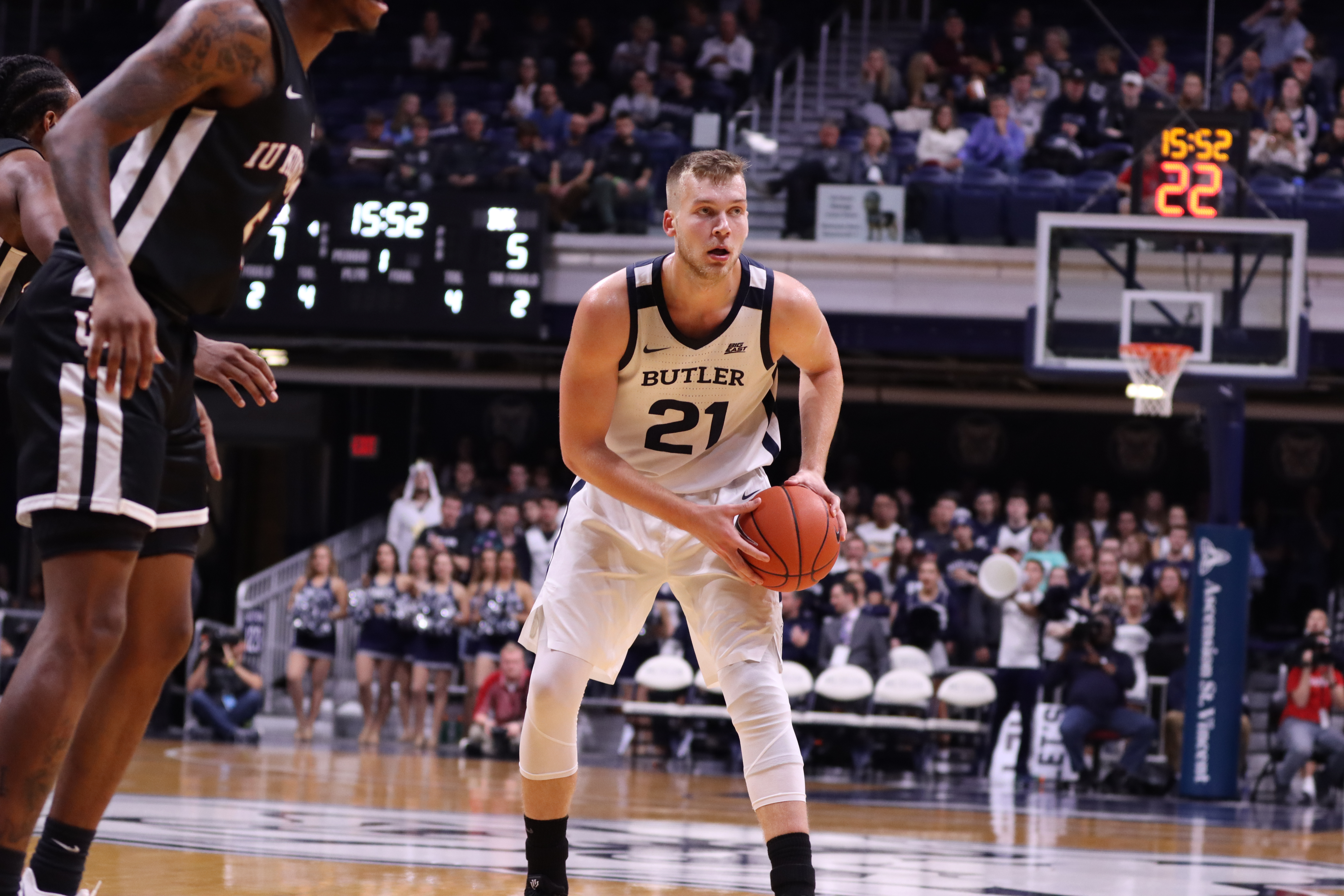 Derrik Smits, a graduate transfer from Valparaiso, joins Butler after averaging 12.2 points per game last season for the Crusaders. Photo by Chandler Hart.

The time has finally come. Butler men’s basketball returns to Indiana’s basketball cathedral on Nov. 6 when the team takes on IUPUI.. All the talk and speculation will come to an end and basketball will be played. But before that happens, here are five questions surrounding this version of Butler basketball.

1. Will Butler return to the NCAA tournament?

NCAA tournaments have become the expectation inside Hinkle Fieldhouse. Since 2007, Butler has won 19 tournament games, advancing past the second round on four different occasions. Last year was only the second time in 12 seasons that Butler did not make the 68-team field. Butler went 16-17 overall in 2018-19 and won just seven Big East games. Before Selection Sunday, the Bulldogs lost five of their last six games including the Big East tournament, playing themselves off the bubble in the last couple weeks of the season. Naturally, this is a big question surrounding this squad. Will a team that has a lot of the same pieces make it back this season?

There are a couple things to keep in mind when weighing this question. First, Butler is not going to get into the tournament on the back of a ridiculously good record due to an easy schedule. Expect the Bulldogs to lose double-digit games this season. With that being said, there is an argument for Butler having the toughest schedule in the country. In nonconference alone, Butler plays three teams in the AP Preseason top 25 — Florida, Baylor and Purdue — and that does not include Minnesota and Ole Miss. Then in conference, Butler will play a total of six games against preseason No. 10 Villanova, No. 12 Seton Hall and No. 19 Xavier. There certainly won’t be a shortage of resume builders for the Bulldogs this season. The question, however, is will they be able to capitalize on enough of these opportunities to make the tournament?

2. Will this team play all 40 minutes on a more regular basis this season?

Obviously, Butler will be on the floor for at least 40 minutes each game, but will they actually compete for 40 minutes? In other words, will the Bulldogs be able to perform for a full 40 minutes more consistently than they did last year? In nonconference alone, Butler let Saint Louis University go on a 15-3 run late in the first half and ultimately lost by 12 on Dec. 1. Then roughly two weeks later, they gave up a nine-point lead to the Indiana Hoosiers at the Crossroads Classic and ultimately lost a game in which they were a better team for the majority of the game — just not the whole game.

Then in conference play on Jan. 9, Seton Hall scored 21 points in eight minutes to end the first half in a game that Butler outscored the Pirates by eight in the other 32 minutes. In possibly Butler’s biggest collapse of last season, the Bulldogs choked a 10-point lead with 5:21 to go against Xavier in the Cintas Center just four days later. Quite simply, does this Butler team know how to win? Do they now understand that nothing is a given, even against an offensively challenged Xavier team that was 184th in scoring offense last year? There were a lot of instances last season when Butler was the better team for 80% of a game. It was the other 20% that bit the Bulldogs in 2018-19.

3. Can Butler win on the road this season?

You won’t be shocked to hear that a team that struggled to play 40 minutes also struggled to win on the road. Last year, Butler finished the season 2-10 on the road. Butler’s only true road wins of the season came against DePaul and Georgetown. They were a full game worse on the road than any other team in the conference including the Blue Demons, who finished at the bottom of the conference standings. Some of the Bulldogs’ worst performances of the season came on the road. In particular, Butler lost to Saint Louis on the road in a less than stellar performance and got embarrassed by Florida to the tune of 77-43 in Gainesville.

In theory, Butler could lose every road game this season and still make the tournament. Florida, Seton Hall and Villanova — not to mention Xavier and Minnesota — all come to Hinkle Fieldhouse this season. The opportunities are certainly here in Indianapolis. But it is much more likely that Butler won’t win all of those games, and could even drop a game at home they shouldn’t, like they have the last three seasons. Winning on the road relieves an immense amount of pressure when returning home. It doesn’t have to be spectacular wins at Baylor and at Villanova to matter. But road wins against the bottom half teams in a league like the Big East are absolutely resume builders and make protecting home court at all cost much less daunting.

4. Who is Butler’s second scorer?

Since Kelan Martin graduated, Kamar Baldwin has been the clear-cut number one option for Butler offensively. That won’t change this year. What Butler needs is a second scorer. Who will be the go-to, consistent second scorer behind Baldwin? There were flashes last season. Paul Jorgensen, who graduated last year, was second on the team in scoring with 11.7 points per game. However, there would be times when he disappeared, like the stretch from Dec. 15 to Jan. 25 when he averaged 7.25 points per game and only broke the 10-point threshold twice in 12 games. To a similar tune, Jordan Tucker also showed signs of being the second scorer, but only scored in double figures six times in the last 14 games of the season.

So who is the guy this season? Through two games it looks like Sean McDermott is ready for that role. McDermott, who averaged 9.5 points per game last year, averaged 23.5 points over Butler’s two exhibition games while shooting 62.5% from beyond the arc. To be clear, those statistics are more than All-American numbers and aren’t sustainable, but they do showcase what McDermott is capable of. The redshirt-senior took a higher volume of shots than he did last season and showed signs of other dimensions in his game besides jump shooting. Whether it is McDermott, Tucker or a dark horse player who makes an unexpected jump, Butler needs another consistent scorer who is good for 13 points on a nightly basis.

5. Will the addition of Bryce Nze and Derrik Smits fix the rebounding issue? Will they fix it in general?

In 2018-19, Butler was 272nd in the country in rebounding margin. On average, the Bulldogs lost the rebounding battle to their opponent by two boards per game. To give that some context, of the 64 teams in the 2019 NCAA tournament, not including the teams who lost in the First Four, 56 of them had a rebounding margin of zero or better — please appreciate that stat, I spent way too much time researching it. And of the eight teams who made it despite losing the rebounding battle, more than half were 15 or 16 seeds. Huge shoutout to Georgia State for making the tournament despite being 345th — out of 353 teams — in the country in that category. That’s not to say rebounding is the only thing you need to get to the tournament, but it is clearly unlikely that you make the tournament if you don’t rebound better than opponents.

In the offseason, Butler added Bryce Nze and graduate transfer Derrik Smits to the active roster. Smits towers over everyone at 7 foot, 1 inch, and Nze is a proven rebounder from the University of Milwaukee. After two exhibition games, Nze looks like he will contribute on the boards. The redshirt-junior posted a double-double including 11 rebounds against UIndy. Butler could also benefit from players like Jordan Tucker rebounding at a consistent clip. If other players rebound well, the lineup options for head coach LaVall Jordan get much better. Christian David also pulled down more than five boards in both exhibitions. Butler must rebound the ball better this season. It will lead to fewer second chance points for opponents, more second shots for Butler and the opportunity to get out in transition. If there is one thing to point to from last year that so desperately needs to improve, it is rebounding.