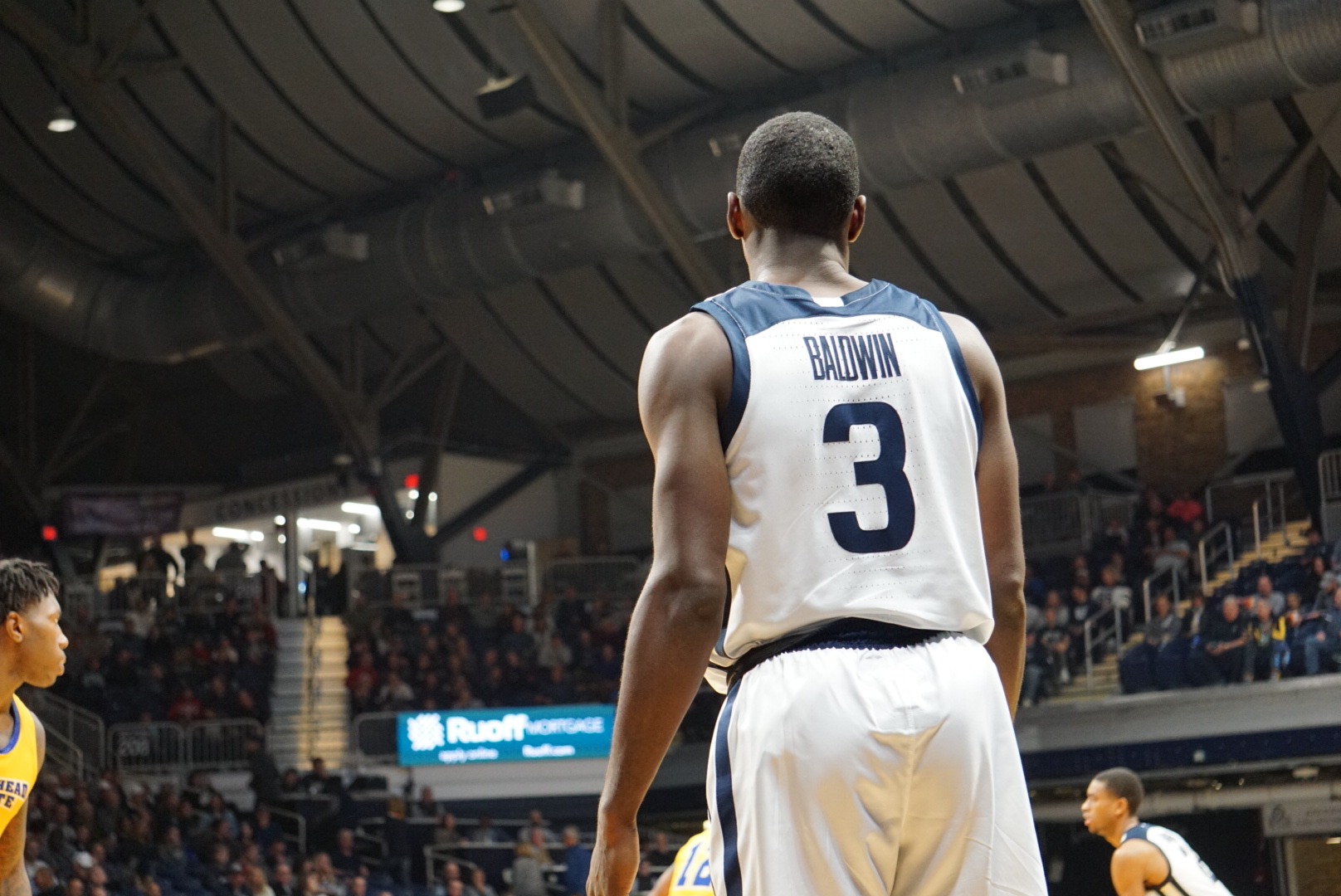 Kamar Baldwin finished with 22 points, 17 of them coming in the second half against Stanford. Photo by Becca Atchley.

The Hall of Fame Classic championship game had it all. Sean McDermott left in a wheelchair at the end of the first half only to play most of the second half. Three Butler starters had two fouls at halftime, and Kamar Baldwin went from non-existent to the tournament MVP.

At the end of the first half and the beginning of the second, Stanford went on an 18-4 run which saw Butler give up a lead it had since the tipoff with 19:35 left in the game. The lead changed five more times in the final 10 minutes.

At the end of the night, the Butler men’s basketball team defeated Stanford 68-67 to win the Hall of Fame Classic. Kamar Baldwin scored 17 points in the final eight minutes to eliminate a second-half deficit that got as high as seven and the senior knocked down the game-winning shot with eight seconds left. We go beyond the box score of a wild night in Kansas City:

1. Butler doesn’t just have a best player this year, they have a leader.

It was clear that Butler’s best player was Kamar Baldwin last year, but it wasn’t clear if Baldwin was really a leader, a guy they could go to when nothing else was going right and they needed someone to step up. Baldwin is absolutely that guy this year. In the second half alone — after scoring just five points in the first half — Baldwin scored 17 points, going 8-of-11 from the field, and single-handedly took over the game. He went from an invisible five points in the first 31 minutes, to 17 over the last eight.

Baldwin is not just Butler’s best player this year, he is Butler’s leader. When he was hurt to start the season, he was visibly in the ear of every freshman stepping on the floor for Butler offering positive reinforcement; that wasn’t something he was doing last year. A year ago, I’m not sure he was capable of doing what he did tonight. On a night where players were hurt and others were in foul trouble, Baldwin was the guy that everyone could turn to to get the job done. A lot can be said about Bryce Nze this season or the continued development of Aaron Thompson and the arrival of Bryce Golden, but Baldwin’s development as a senior — along with other seniors —  leader might be the most important development of them all.

2. Butler has a legitimate frontcourt duo, and they’re both named Bryce.

Bryce Nze and Bryce Golden are cementing themselves as the frontcourt duo for Butler this season. After combining for 21 points against Missouri, Golden and Nze combined for 25 points on 10-of-15 shooting, 13 rebounds and three assists and they did it while only fouling five times between them. Golden got off to a quick start with seven first-half points while Nze did the majority of his damage in the second half — nine points and five rebounds. As a team, Butler outrebounded Stanford by eight and had 12 offensive rebounds to their six.

Not only is this duo leading a good rebounding effort early in the season, they nicely complement each other on the offensive end. Both have shown flashes of back-to-the-basket scoring, but in the last week Golden has emerged as a pick-and-pop outside presence. Golden knocked down another three in this contest which opens up the court that much more on the offensive end but even more so for Nze, who does his work on the block for Butler. With Derrik Smits out, Nze and Golden have established themselves as the guys on the interior for Butler, and so far there is very little to complain about on that part of the floor.

3. This is a tough Butler team.

I will continue to say this until I feel like I’ve said it enough — I haven’t yet — or it isn’t true. Butler has a toughness about them this year that they didn’t last year. Most of it stems from their leadership from seniors and other experienced players, but this is another game that Butler would not have won last year. The Bulldogs didn’t shoot the ball well again tonight — which might be concerning at some point but we’ll let it slide tonight — and it looked like Stanford was going to take control of the game in the second half. Butler was in foul trouble, McDermott was hurt and Baldwin was nowhere to be found. By the end of the game, McDermott, while not scoring, was playing good defense down the stretch, Baldwin was proving why he might be the most underrated guard in the country, and Butler was able to defend without fouling. There wasn’t a whole lot else to add to the adversity Butler faced during this game.

Once Butler got the lead back, Stanford kept coming. Tyrell Terry and Oscar da Silva — they combined for 40 points — kept making tough shots to keep the Cardinal in the game. The Bulldogs kept answering and were able to get the last blow behind Baldwin’s shot and good defense on the final possession. This is a different Butler team this year, and they proved it again tonight.

Tonight, the college basketball world will bask in the glory of Stephen F. Austin defeating Duke inside Cameron Indoor Stadium ending the Blue Devils’ almost 20-year non-conference home winning streak. But tonight, Butler fans will be watching Kamar Baldwin’s game-winning shot over and over again as the program with the longest active non-conference home winning streak moves to 7-0 and is the Hall of Fame Classic champions.