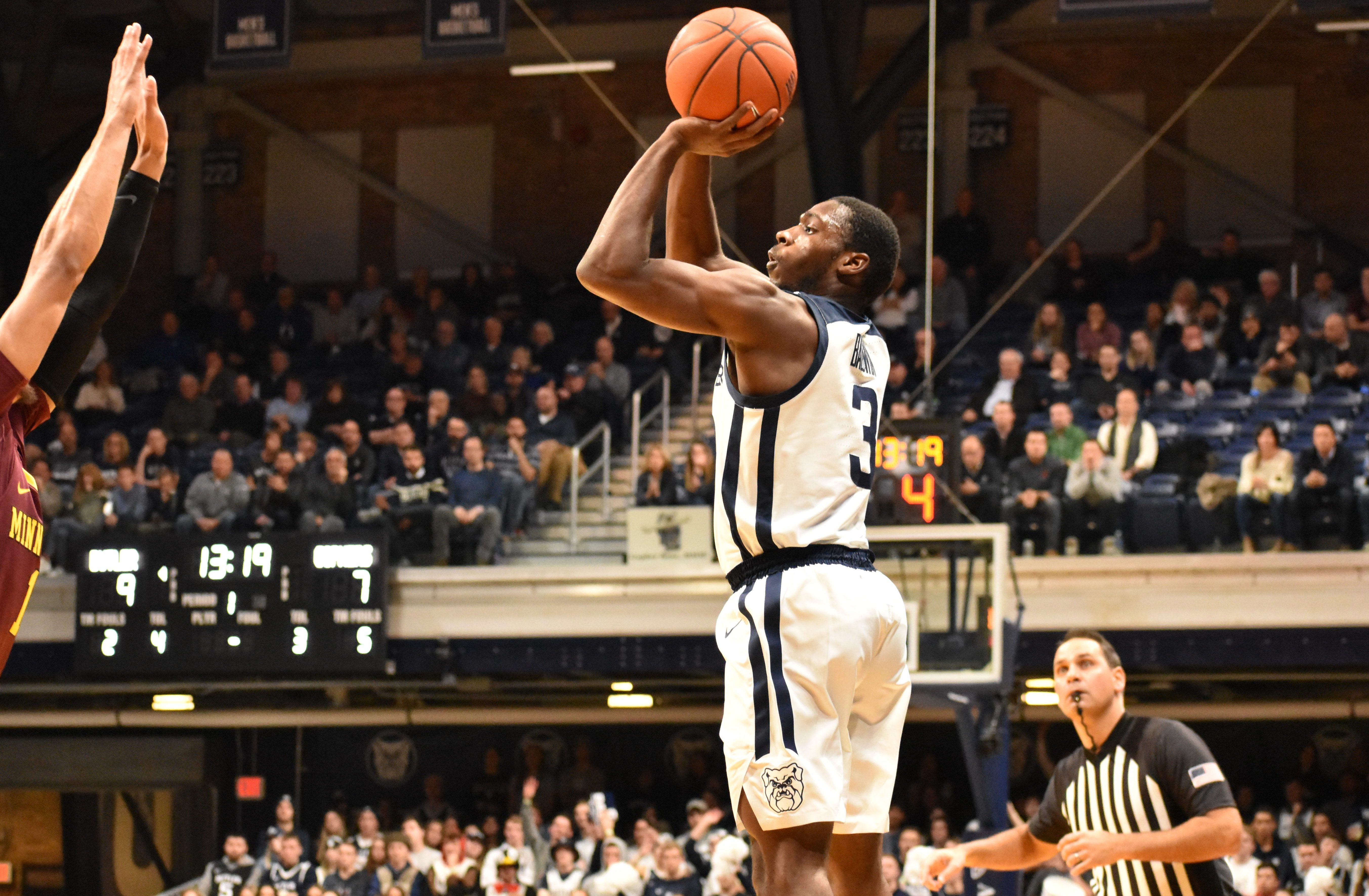 Kamar Baldwin takes a shot during a game this season. Baldwin led Butler with 22 points as the Bulldogs defeated Stanford 68-67 on Nov. 26 to win the Hall of Fame Classic championship. Donald Crocker / Collegian file photo.

In a game that felt like it should have been taking place in late March instead of late November, the Butler men’s basketball team defeated Stanford 68-67 in Kansas City on Nov. 26 to win the Hall of Fame Classic championship. Here’s a look at some of the key news, stats and notes from the victory:

Kamar Baldwin put Butler on his shoulders in the second half, scoring 17 points on 8-of-11 shooting in the final nine minutes of the game. After Bryce Wills dunked with 21 seconds remaining to give the Cardinal a one-point lead, Baldwin knocked down a stepback jumper with just eight seconds on the clock to secure a Butler victory. Baldwin ended the night with 22 points, his third game of 20+ points this season. The senior guard is averaging 20.4 points per game in his last five contests.

Thanks to a development over 1,000 miles away, Butler now leads the nation in consecutive nonconference home victories. Around the same time Baldwin was knocking down his game-winning shot, Stephen F. Austin’s Nathan Bain was turning a steal into a game-winning layup at the buzzer as the Lumberjacks upset No. 1 Duke at Cameron Indoor Stadium in overtime. Stephen F. Austin’s win ended a streak of 150 consecutive nonconference home wins for the Blue Devils which began back in 2000. Butler’s 55 home nonconference wins in a row are now the longest such stretch in the country.

Sean McDermott returned to the game in the second half after being wheeled to the locker room prior to halftime. The redshirt senior exited with 3:41 left in the first half with help from the Butler training staff and was later taken to the locker room in a wheelchair. After being evaluated for a left ankle injury, McDermott returned with 8:43 remaining in the second half. He was clearly not 100 percent but appeared to be moving fairly well. McDermott was 0-of-2 from the field with zero points, three rebounds and one assist in the game.

Butler’s two primary interior options this season, Bryce Nze and Bryce Golden, combined for 25 of the team’s points. Aside from Baldwin, Nze and Golden were the only two Bulldogs with double-digit points. Nze scored 13 points for his sixth game this season with double-digit points, and also added a team-high eight rebounds. Golden scored 12 points on 4-of-5 from the field along with five rebounds and three assists.

The Bulldogs’ one-point victory marked just the second time this season Butler has won by single digits. The only other time was an eight-point win over Minnesota on Nov. 12.

Stanford’s 67 points marked the first time in eight games this season the Cardinal have been held to under 70 points. Stanford entered the game averaging 77.3 points per game, with three games of 80+ points.

What’s next: The Bulldogs will have the rest of Thanksgiving week off from game action before taking on Ole Miss in their first true road game of the season on Tuesday, Dec. 3. Ole Miss is 4-1 on the season and coming off an 87-86 loss to No. 16 Memphis on Nov. 23. The Rebels are playing in the NIT Tip-off Games later this week.