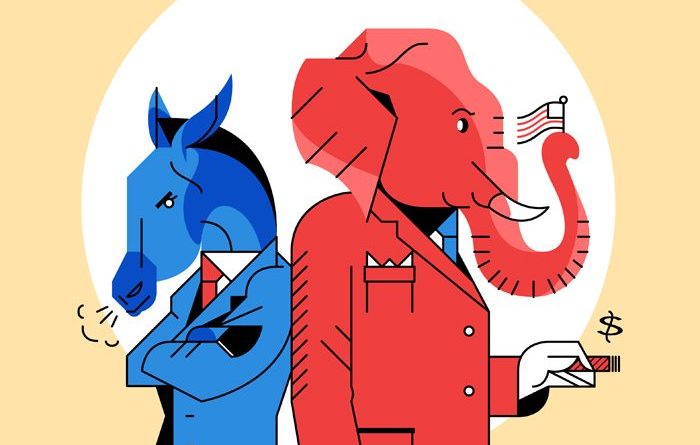 In my short month and a half at Butler, I have already experienced political harassment. It happened all the time when I was in high school; I am not crying over it alone at night. I grew up in a conservative family in the Republican haven of Noblesville. As a Democrat, I faced opposition daily.

On Sept. 12, my roommate and I were quietly watching the latest round of the Democratic primary debates in one of Irvington’s lounges. Over the course of the debate, students passing by looked at us in sheer disgust. Guys would try to intimidate us by getting inches away from our face, giving us their two cents on politics. Usually it takes a little more than watching a debate for me to be harassed, but I guess you never know.

Then, a group of boys filed out from one of the study rooms. They glanced at the TV and shouted, “f***ing libtard snowflakes!” and “go Trump 2020!” as they slithered towards the opposite end of the hallway. My roommate and I offered to talk to them, but they were clearly looking to start a fight.

The boys came around with the strings on their hoodies drawn to hide their face, as if we had not seen them 10 seconds before, and continued to blare a GarageBand produced Trump campaign song. Two of them danced and one started recording in hopes of getting a reaction out of us. I stared at the cameraman with a blank face and turned my attention back towards the TV.

To all of the frustrated “non-political” people out there who can not understand why people like my roommate and I care about the debates: I am so sorry that you feel compelled to violate people’s personal space to say that you “do not like politics.” Remember that some people do not have the option of ignoring it. Political issues may be an exhausted argumentative essay topic for you, but it is life or death for others who do not have your privileges. My thoughts and prayers go out to you during this turbulent time.

After the shooting at Noblesville West Middle School and threats at Noblesville High School, I co-founded and directed Students Demand Action Noblesville. This group quickly seasoned me with experience and knowledge about approaching political conversations. Through all of the events I have participated in, I have learned that some of the greatest change begins in conversation.

No matter how loudly you argue with someone or attack their character, you are not going to change their views. Sitting down and talking with people can help you understand their views and where you stand. When I suggest talking to others, I mean having a relaxed conversation in good faith to better understand one another. Screaming your views because you feel threatened is not going to draw people in to have an open conversation.

Personally, I do not think it is bad to openly express your views. Everyone is entitled to having their own opinion. But I draw the line when people start being disrespectful and cannot back up their claims.

I have run into the boys individually in the days since and they are too scared to make eye contact with me. If you are going to attack people for their views one day, especially me, you better keep that same energy all the time.

Let me clarify: my goal is not to create a hostile culture on campus. The point is to learn from your wrong-doings. You do not have to be best friends with everyone but you should at least respect them and their beliefs.

The idea that political discourse needs to be a never-ending battle is incorrect. Whether it be your family, friends or classmates, talk to them about different issues to get an idea of their beliefs. You may find that people’s views are not as extreme as others make them out to be.