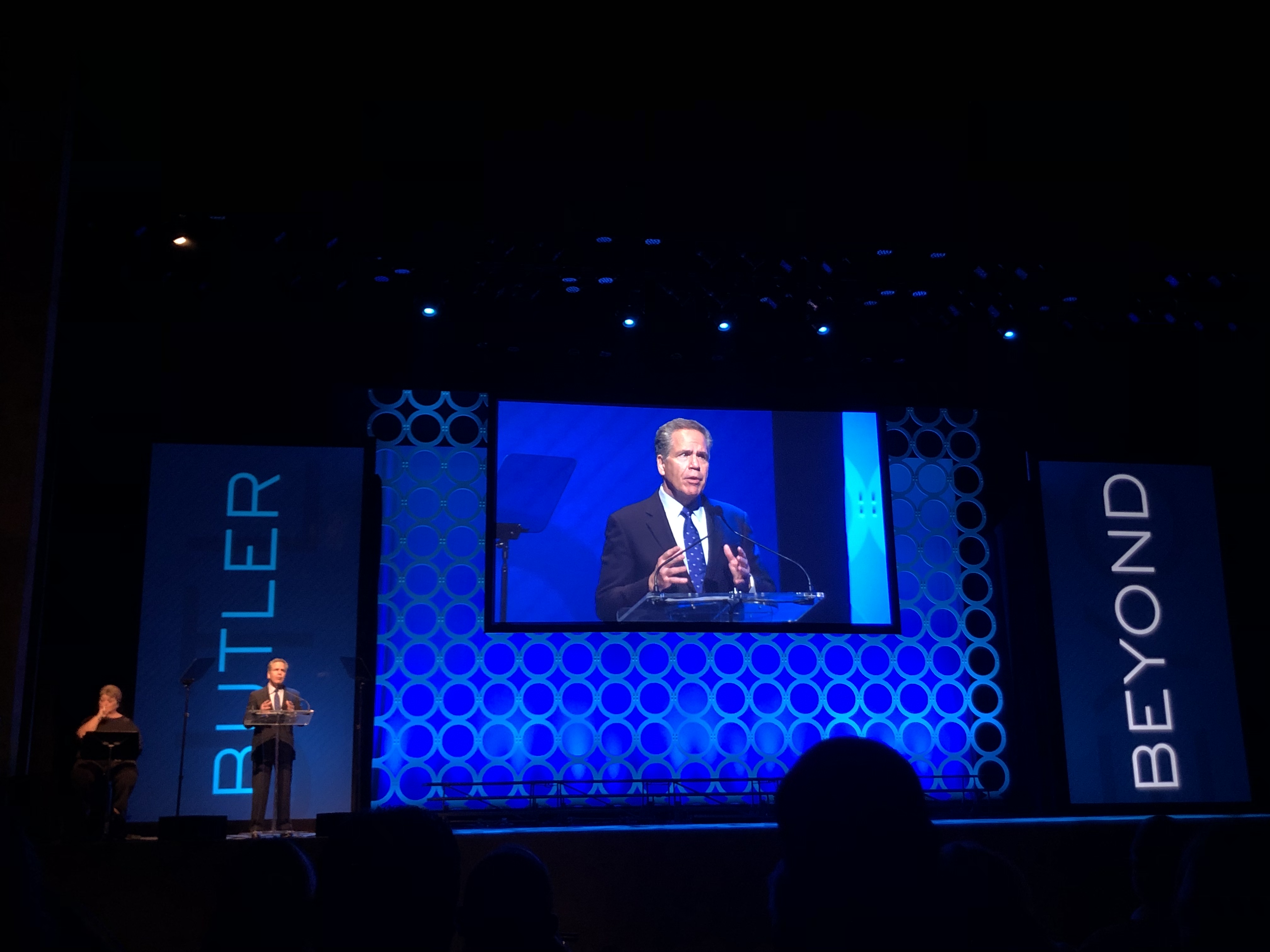 President Danko speaks at the Butler Beyond campaign. Photo by Sorell Grow.

Administrators, alumni, university trustees and current students launched Butler Beyond, a comprehensive fundraising campaign with a goal to raise $250 million by May 2022, at Clowes Memorial Hall on Oct. 5.

The campaign has already raised more than $171 million from over 27,000 donors, according to Butler University’s press release regarding the launch.

The launch opened with remarks from Demia Butler Hicks VII, a direct descendant of the Butler’s founder, Ovid Butler, on Clowes’ stage.

Butler accepted women and people of color from the day the university first opened its doors in 1855 with a student population of 20 and two professors, Hicks said.

“This was a bold position in pre-civil war America,” Hicks said about the university’s policy of equity and accessibility for all.

Later in the evening, Butler President James Danko announced the actual campaign, a new strategic direction for the university crafted around three specific pillars: student access and success, innovations in teaching and learning, and community partnerships.

“We intend to hold firmly to the traditions and values that have always defined a Butler education, while evolving to meet the changing needs and expectations of learners, employers and society in the 21st century,” Danko said in the press release.

The funds raised will be implemented in various ways in accordance with the three pillars of Butler Beyond.

The Butler 2020 plan, which is in its final stages, largely consisted of advancing physical infrastructures on campus, like the additions of Fairview House, Andre B. Lacy School of Business and Irvington House. But Butler 2020 is a “strategic direction” for the university, focused on non-physical and educational assets, opportunities and partnerships.

“A college education remains one of the most influential factors in guaranteeing a person’s lifetime well-being and success,” Danko said at the launch. “Butler’s mission and our role in the community remain as relevant as ever, but only if we are willing to be bold and take risks in pursuing programs, partnerships and initiatives that may look very different from what is familiar to us now.”

The event included several performances by Butler dance students, chorale members and an orchestra, as well as intermittent videos about the campaign.

Jackson Borman, a senior strategic communication major, said he left the event with questions about what the campaign actually is.

“The event was like, nuts,” Borman said. “There was a lot going on but I felt like they didn’t really say much. It was just like, ‘we need money to do good things,’ but they didn’t say what they’re going to do.”

The innovations in teaching and learning pillar is intended to add non-traditional education options for students, in order to make Butler a more versatile institution for a variety of educational paths.

“We will incorporate the latest in technology, we will create innovative partnerships and we will meet learners where they are,” Danko said at the launch. “Embracing a lifelong learning model allows Butler to adapt to the changing needs of tomorrow’s students while diversifying our resources, thus ensuring Butler’s long term sustainability in pursuit of our mission.”

Melissa Beckwith, vice president for strategy and innovation, was involved with organizing Butler Beyond.

“I think the event went fabulous,” Beckwith said. “I think everybody’s excited around the vision for the university, and the ability to go out and raise funds to support that vision makes us really excited about our future and you can feel that with the energy in the room.”

Skylar Popiel, a senior elementary education major, said she was impressed by the event.

“It’s really exciting to see that they’re pushing the university in this direction and it doesn’t stop after the 2020 plan,” Johnson said. “I think there are some smaller things they’ll start to implement right away but obviously it’s going to last a lot longer than when I’m here.”