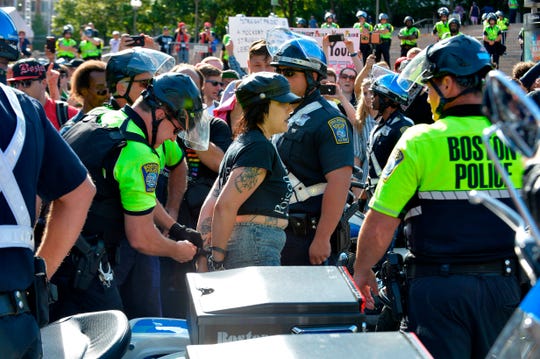 When Super Happy Fun America declared that they were going to have a Straight Pride Parade in Boston, I, like many other people in the LGBTQ+ community, laughed and immediately started making memes. There was no way an actual parade would be created, right?

Well, on Aug. 31, the organizers of the parade — Super Happy… you get it… — did what they said they were going to do: walk the exact same route that the Boston Pride Parade traveled just two months prior.

To be honest, I completely forgot about something something Fun America’s promise to create a parade for heterosexual and cisgender people as well as Milo Yiannopoulos. And, while the parade has come and gone, there are still some important things I think we should be talking about in regard to the nightmare that was Straight Pride.

The most glaring point that should be discussed is the amount of hypocrisy with how parade-goers and protesters were treated in both Straight and Gay Pride. When we have pride parades, there are always hateful counter protesters with signs talking about how we’re going to hell and all that jazz.

We also usually have a police presence — which in and of itself is problematic considering the first Pride was started as a riot against a police raid at the Stonewall Inn 50 years ago. The main difference between Straight Pride and Gay Pride is that the police actually attacked and prevented the counter protesters from protesting at Straight Pride.

Currently around 36 counter protesters are being charged for their part in the events of Straight Pride; the judge presiding over the cases refuses to drop the charges against them. The prosecutor is calling for body camera footage to be released.

Does anything along the lines of this ridiculousness happen at our Pride? No. Nothing is ever done about our counter-protesters no matter what words they shout, signs they hold or actions they do. As soon as those same counter protesters become the minority, though, the police do something.

Another hugely problematic aspect of Straight Pride is the fact that it was a façade for a pro-Trump white supremacy rally. “Make normalcy normal again” and a giant Trump float with different things he’s promised or said — such as “secure America’s borders” or “drain the swamp” — were both large parts of the parade.

Reading some of the responses as to why people are marching, it is easy to see that the folks marching aren’t here for straight values — which aren’t even a thing to begin with — like they supposedly should be. Instead, they are here to either uphold the Bible, show support to Trump or show queer folks that they’re not welcome in the city of Boston.

Based off those responses, the parade seems less about celebrating the struggles heterosexual folks experience and more of a homophobic Trump fest.

But we already knew that, didn’t we?

I’d like to take a moment to direct a little something toward straight people. Look, I get it. I understand that as things progress you may feel a little scared, but that’s okay.

It’s okay to feel a little scared that people are being more open about their truths and majority of the world is beginning to accept them. The status quo is slowly changing; there’s more diversity and inclusion!

No one is taking anything away from you, the world will always value you due to societal heteronormativity. No amount of gay rat teachers on children’s television will change that, I can assure you.

But if you want to have the oppression minorities face, especially a minority that is killed in some places in the world for just existing, then you need to experience the struggles that go along with that too.

No one throws you out of the house for being cis or straight. No one cites Gay Panic Laws as the reason why they maliciously murdered you or your loved one in cold blood. No one fires you for the fact that you can’t help who you love. No one tries to deny your rights to exist in spaces and be open and proud of who you are.

Compared to the queer community, you heteros have it made. That’s not to say everyone doesn’t have struggles, but the amount of mistreatment LGBTQ+ folks get due to their sexuality or gender does not compare to issues that cis straight folks deal with.

As for people in our little Butler bubble who thought the parade was funny or supported it, Straight Pride isn’t funny or something you should support. There are faculty, staff and students who are LGBTQ+ on this campus whether or not you are aware of their presence; and they are affected by slurs being grafittied on frat houses and microaggressions in class.

Just because you’re in Indiana, one of the worst places in the United States for LGBTQ+ people to live, does not mean that we aren’t here.

Your parade has come and gone, I hope you enjoyed your single day of pretending to be oppressed, Super Happy Fun America.