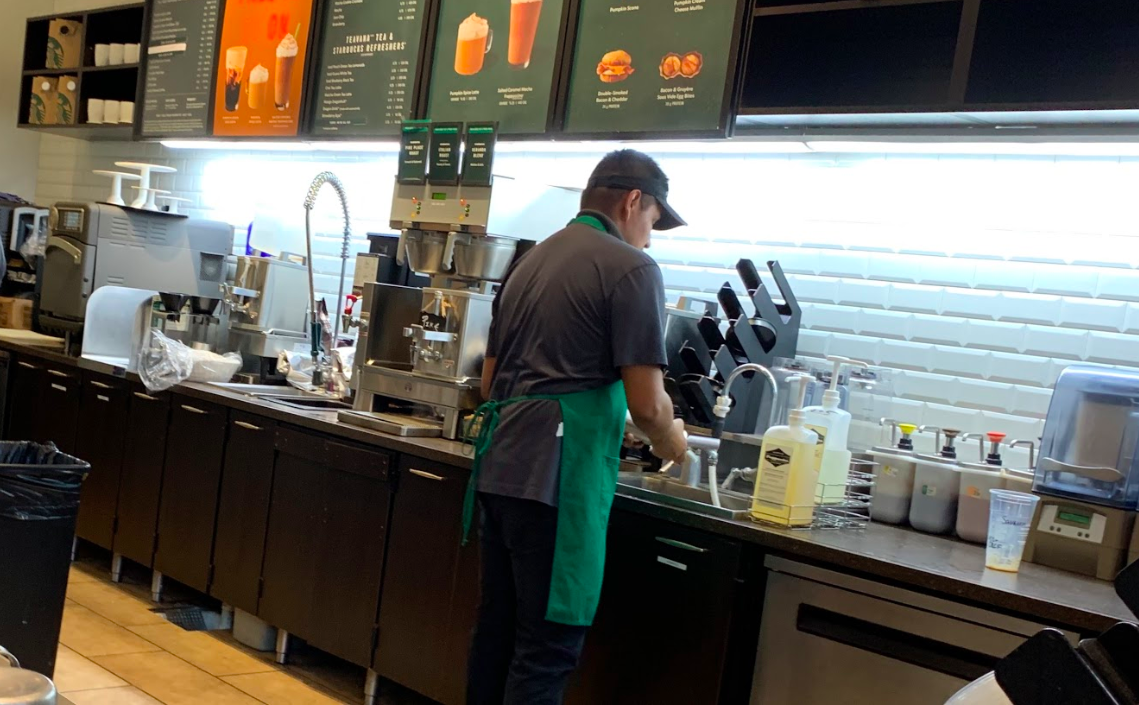 A Starbucks employee preparing a drink. Photo by Kelsey Bolin.

Over the past few weeks, students looking to satisfy their Starbucks fix have been faced with long lines and disappointment. The on-campus Starbucks has been experiencing product shortages as a result of a distributor strike against Starbucks across the Midwest.

According to the Wall Street Journal, the strike is the result of a failed labor agreement between Starbucks’ Midwestern product supplier, DPI Specialty Foods Inc., and a labor union, Teamsters Local 710.

About 300 DPI truck drivers and warehouse workers who supply Starbucks in the metro areas around Chicago, Minneapolis, St. Louis and Indianapolis fall under the labor contract in dispute.

Starbucks officials claim the labor dispute and the food supplies were two separate issues, according to the Chicago Tribune. The labor union and Starbucks have been negotiating an extension to the labor contract in question.

While this has been occuring, Butler’s campus Starbucks temporarily had difficulty keeping up with product demand. For a period of time, the store was out of nearly every ingredient that was not plain hot coffee.

Sophomore marketing major Colin Dennis sometimes accompanies his friends to Starbucks to help them pass the time in line.

“I haven’t gone to Starbucks yet this year with someone and seen them get the order they wanted,” Dennis said.

In addition to the strikes, the campus Starbucks is under new management through Bon Appetit. Over half the Starbucks staff are new workers, which could also contribute to extended wait times.

Out of the 20 staff members, 16 are students and four are full-time non-student employees. On any given shift, there are typically at least one or two full-time employees accompanying the part-time student staff members.

David Webster, a full-time Starbucks employee, said they are back to full functionality.

“We’re fine now,” Webster said. “The only thing we don’t have is guava.”

Two weeks ago, the Butler Starbucks had posted signs stating that they were experiencing a shortage of certain products. The notices have since been taken down.

Webster said it was difficult for the campus Starbucks to keep up with demand during the strike because they were not receiving their regular deliveries.

He said when Starbucks would get shipments, they did not contain all the necessary supplies. Instead, they would be sparse and only contain a few of certain ingredients, and employees would be forced to try and make the ingredients last until the next delivery.

Supplies such as cups and lids are delivered to Starbucks every Tuesday, and when they do not receive enough, the store finds itself running out by the weekend. By Friday, students who order a venti drink can often expect to receive it in a trenta cup.

Webster said since the store has limited storage space, they are limited to smaller, more frequent deliveries. There is also not enough space to provide a wider range of sandwiches and pastries.

Cambria Khayat, a sophomore international studies and economics major, noticed that students have been using Starbucks in place of C-Club.

“The grab-and-go selection should be better in order to compensate for the C-Club construction,” Khayat said.

Not only is the lack of product availability disappointing for students, but the wait times have been longer than usual.

“One of my friends went to Starbucks 25 minutes before her class, and she had to leave before she got her drink in order to be on time,” Khayat said.

Students can now order all their favorite drinks — as long as they give themselves enough time to get to class once their drinks are made.