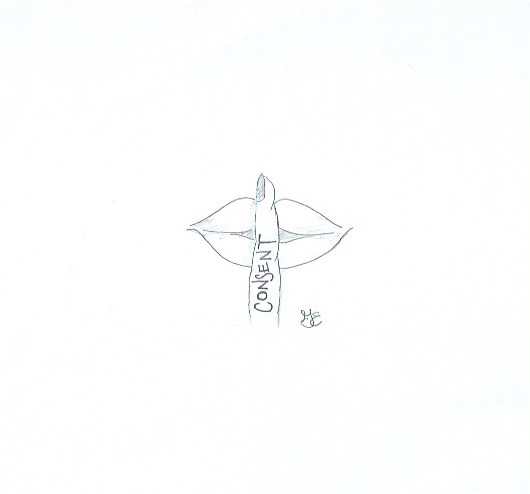 Let’s talk about the c-word. No, not that one! I’m talking consent. We talk about it in sex education, in relationships, and on social media. Maybe we need to talk about it a little bit more in other contexts, however.

While sexual consent is one of the most prominent uses of the concept, consent is not exclusively connected to sex. It should be involved in your daily life as well.

Julia Bartusek, a senior peace and conflicts studies major, said there are two parts to consent: the asking and the definite ‘yes’ response.

“I think people think of consent in a sexual context, but it can also be actions in your everyday life,” Bartusek said.

Consent applies to any situation you could ever imagine finding yourself in. Consent can be as simple as asking someone if you can tuck in their tag before you walk up and do it.

Junior sociology major Natalie Shook said consent is “a boundary of respect.” This boundary should be taken into account in any situation in which you are doing something that you feel could be invasive in any way, through touch or even verbally.

For both men and women, being touched unexpectedly can be triggering if they have experienced trauma in the past. Let’s face it though, being touched by a stranger without being asked first in any setting is often pretty weird.

Before running up to touch someone, even if you’re attempting to fix something out of the good of your heart, just ask. It doesn’t need to be awkward; it can be as easy as “Hey! You have a hair stuck to your back. Do you mind if I get that off for you?”

Simply by asking, the person in question has a warning that someone is going to touch them, and they can prepare for it. Asking before touching also gives a person the opportunity to say “Oh, I’ll get that!” which is a polite way of indicating they’d rather you didn’t touch them.

Alex Starkey, a first-year pharmacy student, emphasized the importance of understanding that consent applies to “touching in general.” He has noticed that strangers often touch his friend’s tattoos without asking first.

“If you see someone’s tattoo and you’re just petting it… it’s like, ‘No, why would you do that?’” Starkey said.

Tattoos are deeply personal, and although they look different than natural skin, they feel exactly the same. While it is kind and usually welcomed to compliment people’s tattoos, it is uncomfortable to be examined.

Bartusek said while consent is immensely important to use with your significant other or someone you’re hooking up with, it also applies to “everyone you interact with.” With your friends, it is important to keep in mind everyone does not show affection in the same way.

For example, while you may love to be hugged, your friend may feel smothered or confined by it. Through conversation and asking for consent, you can acknowledge this and be sure not to make them uncomfortable.

As members of Generation Z, we spend a significant part of our waking hours on social media. Sometimes, such extended time online can blur the line between what is OK to put on the internet forever and what is not.

Before posting pictures and videos of your friends, get their consent. Even if you’re out having fun, they may not want photographic proof in the cyberworld.

For those of you who are 21 and older, posting pictures at a bar or with drinks is legal and entirely socially acceptable. Before you post a video of your best friend shotgunning a beer, however, you should ask if it’s okay, because there are a lot of issues that could arise from unwanted posts online.

Your friend, for example, could be applying for a job, and would not want to look unprofessional if their potential employer looks through their social media. For those of us under 21, it could mean losing scholarships, a leadership position or even membership in something important for the future.

Simply asking for consent before you post could save you from having hard conversations and friction in your relationships. Posting without your friends’ consent is unfair and could have dire consequences.

Keeping yourself accountable for asking others’ consent not only makes your interactions more fulfilling and comfortable, but can also cause the people surrounding you to be mindful of asking how people would like to be treated in their lives as well.

Consent is simple and easy. By taking two seconds to ask, you can foster healthy relationships, strengthen friendships and allow people to feel safe in your encounters. If you make a practice of asking the simple questions, the more difficult ones seem less uncomfortable as well.

Keep the c-word in mind. Ask consent from your friends, family members, significant others and even strangers. Ask consent before you act.

It’s worth it to maintain respect and basic decency in today’s crazy and often unsettling world. Take the time to do the right thing, today and every day.