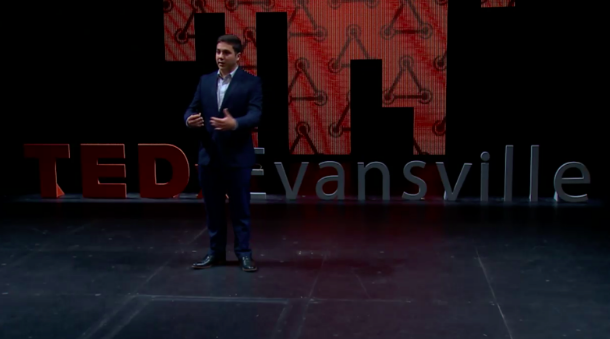 Butler senior Nathan Hall has always been fascinated with Corporal James Gresham, the first American battle casualty in World War I. During Hall’s first year on campus, he was assigned a historical research paper on a soldier of his choosing. Thus began the journey from academic paper to undergraduate research to TEDx Talk.

“This mystery started to form in my head of, ‘What happened to this guy?’” Hall said. “There was so much hype surrounding him coming home, and nothing ever got done. That really sparked my interest for the Undergraduate Research Conference, and I worked on it all semester.”

Hall gave a ten minute presentation at the Undergraduate Research Conference in the spring. Then earlier this year, Hall’s younger sister saw that TEDx was visiting Evansville and encouraged him to apply.

TED is a nonprofit organization that encourages innovation through short speeches, and TEDx is an independently organized, TED-sponsored event. The letters stand for Technology, Entertainment and Design. In order to give a TEDx Talk, one must have an idea worth spreading.

Hall completed an online application regarding his subject matter and why his talk is an idea worth spreading. Hall then auditioned and was one of eight speakers selected to give a TEDx Talk.

Before the talk last Friday, Hall realized he had to adapt his 24-page research paper to the TEDx format. In order to make his subject more accessible, Hall refocused his talk towards memory. Hall’s official speech title became “Saving Corporal Gresham: Public Memory Then and Now.”

“Me talking about sources and broader history is pretty boring to most people,” Hall said. “The idea worth spreading was that memory, especially how we as a society remember things, is a lot of just what we decide to talk about.”

Hall went through three to four different versions of his speech and was assigned a mentor who had already given a TEDxEvansville talk. Hall wanted to learn every word of his speech by heart, so memorizing the talk took two weeks beforehand.

During his talk, Hall emphasized the importance of discourse within memory.

You can watch a live stream of Hall’s TEDx talk here. His talk begins one hour and 26 minutes into the live stream. Hall said he encourages Butler students and any young people to participate in TEDx events.

“There’s nothing that makes your ideas, as a 19 or 20-year-old less valuable than someone who’s 35,” Hall said. “A lot of the energy and innovation at these Ted Talks comes from young people, I’d encourage anyone to take the first step.”

TEDx is hosting an event in Indianapolis on Nov. 29 called TEDxIndianapolisWomen.