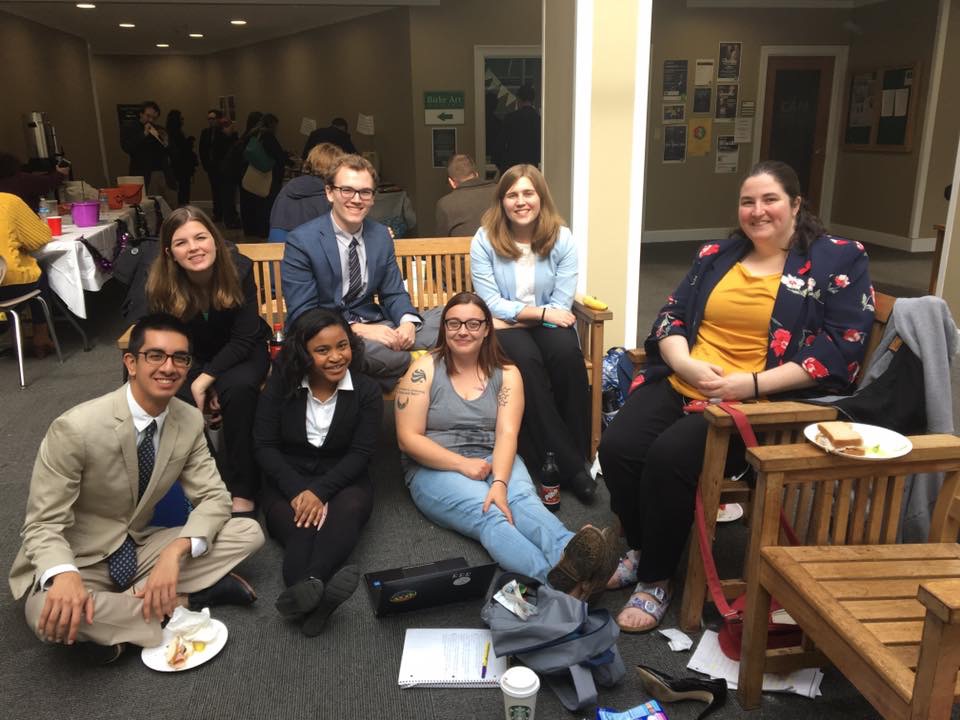 The team waits for final round postings at Marshall University. Photo courtesy of the Butler speech team Facebook page.

The Butler University speech team is celebrating its 100th year as it looks to grab its second consecutive national championship.

The speech team’s mission is to foster an educational environment where students can grow and improve their speaking skills. Over the last 100 years, the group has competed heavily across neighboring states, introduced women on the speech team, held radio debates and has taken many first place awards at events.

In 1919, a year after the speech and debate team became an official organization at Butler, the university introduced co-ed debating. In 1935, the co-ed team competed in two radio debates over popular channels in Indianapolis at the time.

This season, the speech team has done their fair share of traveling, attending events at University of Indianapolis, Illinois State University and Ball State University. Last weekend, the team was at Marshall University where six students competed.

Jannai Bates, a first-year and speech team member, said the dynamic of the team makes the experience special.

“I just joined the speech team and feel like I am part of a family,” Bates said. “It’s also really cool to see the different cities as you travel through them.”

Though the team has attended four tournaments so far, they will be attending two more tournaments at Muskingum University in New Concord, Ohio, on Nov. 3, and Transylvania University in Lexington, Kentucky, on Dec. 1.

Director of forensics Janis Crawford has been involved since 1998. Forensics is the study of public speaking and debate. Since Crawford took over as director of forensics, she said the team has fluctuated in size and has increased travel opportunities to attend more tournaments.

The Butler Speech and Debate team travels to five to seven tournaments a season, including trips to the Pi Kappa Delta, the National Speech & Debate Association, and National Forensic Association National Championship.

Public Narrative is a narrative of an event in your life that ultimately has a message for the world.

Junior Lyssa Dougan, vice president of the speech team said the preparation period for an event of this nature and the national champion title remind her of the importance of speech team. In 2017, Dougan was the Novice National Public Narrative Champion.

“I find that perfecting your performance, making sure how you present yourself works, is the really hard part,” Dougan said in an email. “It demands a lot of practice, running it over in front of your team and coaches and listening to the critiques.”

Though it demanded practice and involved the listening of constructive criticism, Dougan said her success at the national championship was a reminder of how hard work pays off and why she loves being a part of the speech competitions.

“I felt proud of myself, like I had made my speech team and Crawford proud, and it reminded me why I do this,” Dougan said in an email. “In someway, somehow, what I said got heard. That’s why I love speech. No matter who you are or what you come from, your voice will be heard.”

The Butler speech team will host an alumni dinner Jan. 18. Their 17th annual tournament at Butler will be the following day.