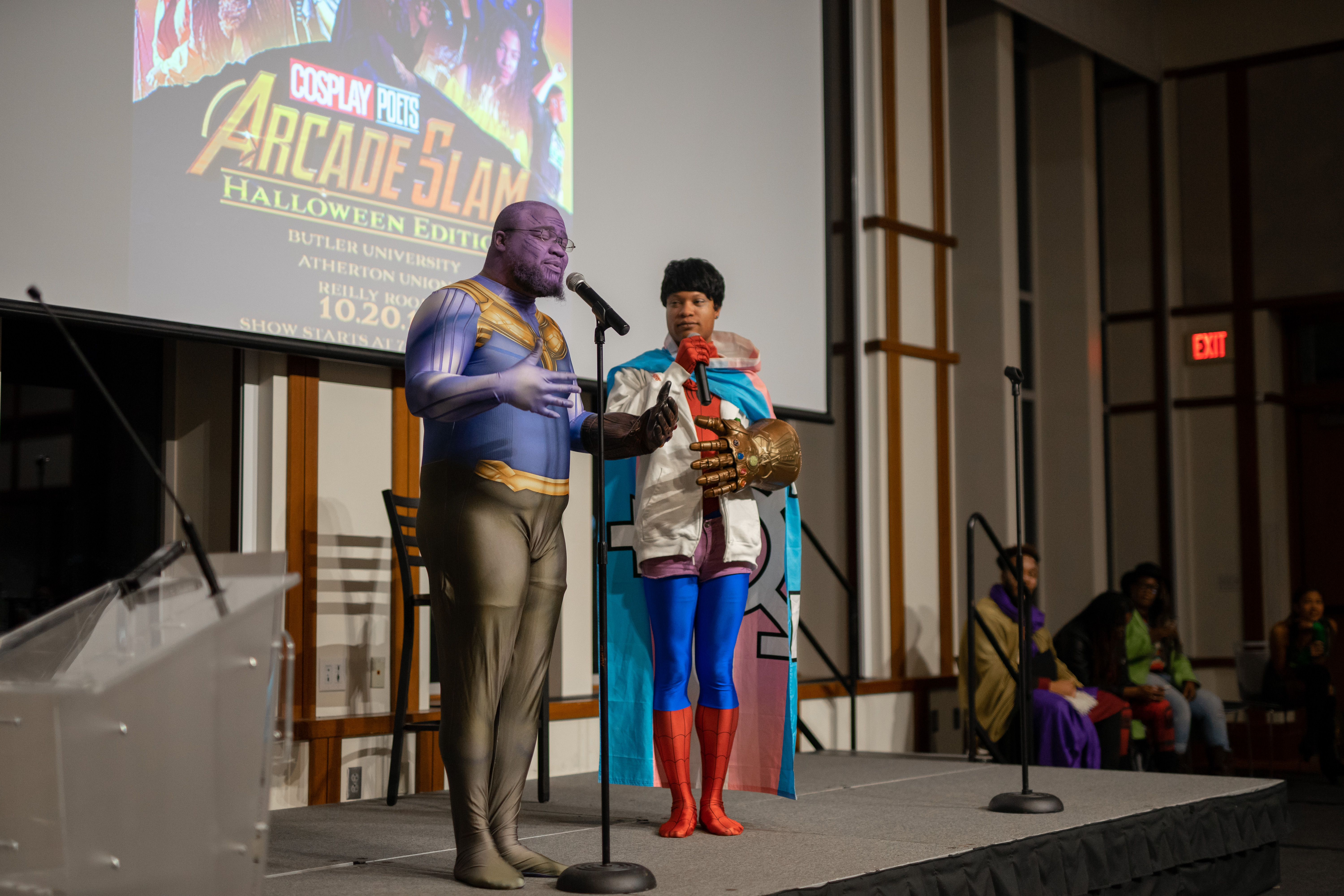 Several poets dressed in cosplay participated in a poetry slam on Oct. 20. Photo by Adam Cvik.

Arcade Slam is a poetry slam where poets from the Indianapolis area perform as Marvel superheroes. Each poet competes for the “gauntlet” and to be named winner of Arcade Slam.

Khayleia Foy, a senior actuarial science major and BSU president, said she was excited to see how the event played out.

“I understand the background behind the event and the structure of the event,” Foy said. “But, I want to see it in action and see how it actually works.”

Eight poets performed: five challengers and three bosses. The bosses are usually top local poets and will battle all challengers. This type of structure is typical for the cosplay poets’ Arcade Slam.

The challengers faced off against the bosses and attempted to knock them out by scoring more points on their poems. The bosses also used special rules in attempt to defeat the challengers.

Some of these rules included swapping poems, not knowing how much time the poet had to perform, and one-minute poems on the topic of the boss’s choice. The challengers would then choose one representative to try and defeat the boss. If the boss won, the challenger was defeated, but if two challengers beat the boss, the boss was knocked out.

“My goal for this event is to show Butler the different things that Indianapolis has to offer,” Foy said. “I thought it would be interesting to bring this to campus and showcase these artists and share their stories.”

Most of the contenders were professional poets from the Indianapolis area, but one poet was from Butler University. Mikayla Whittemore dressed as the character Poison Ivy and competed for the gauntlet.

Whittemore, a sophomore political science major, said she was anxious to present her poetry for the first time.

“I’m very nervous because the other poets I’m performing with I look up to a lot,” Whittemore said, “And I have never actually read my poetry for a crowd.”

Whittemore said she hoped her performance resonated with the audience.

“These are things I have been troubling me or been on my mind, and I have one line in one of the poems I am read that has sat on me since sophomore year of high school,” Whittemore said. “It’s nice to be able to share myself, and I hope it resonated with people.”

Whittemore was defeated by poet Saint Peace by a slim margin after being chosen to read a poem about sacrifice.

Autumn Wobser, a first-year pharmacy major, said she decided to attend the event because she was intrigued by the unique theme of the slam.

“I heard cosplay and Marvel and thought it sounded interesting,” Wobser said. “I don’t listen to a lot of poetry, so I thought this would be a good way to hear it.”

Chantel Massey, an Indianapolis poet dressed as Deadpool for the event, said she decided to be a part of Arcade Slam because it allowed her to enjoy poetry.

“I could just have fun with poetry and do something different and challenge myself in a different way,” Massey said, “and indulge in my love for Marvel characters.”

Massey said she hopes Butler students are motivated to try something new after watching Arcade Slam.

“I hope they feel challenged and inspired to do something different and unique in the city,” Massey said, “And try new things and have fun with whatever it is you decide to do and not to take life so seriously.”

Massey defeated the first two bosses but lost to poet Too Black in the final round. The final contender to face Too Black was challenger Devon Ginn. After a close battle, Too Black took the gauntlet.

BSU will host their next event, a Kwanzaa celebration, on Nov. 30.