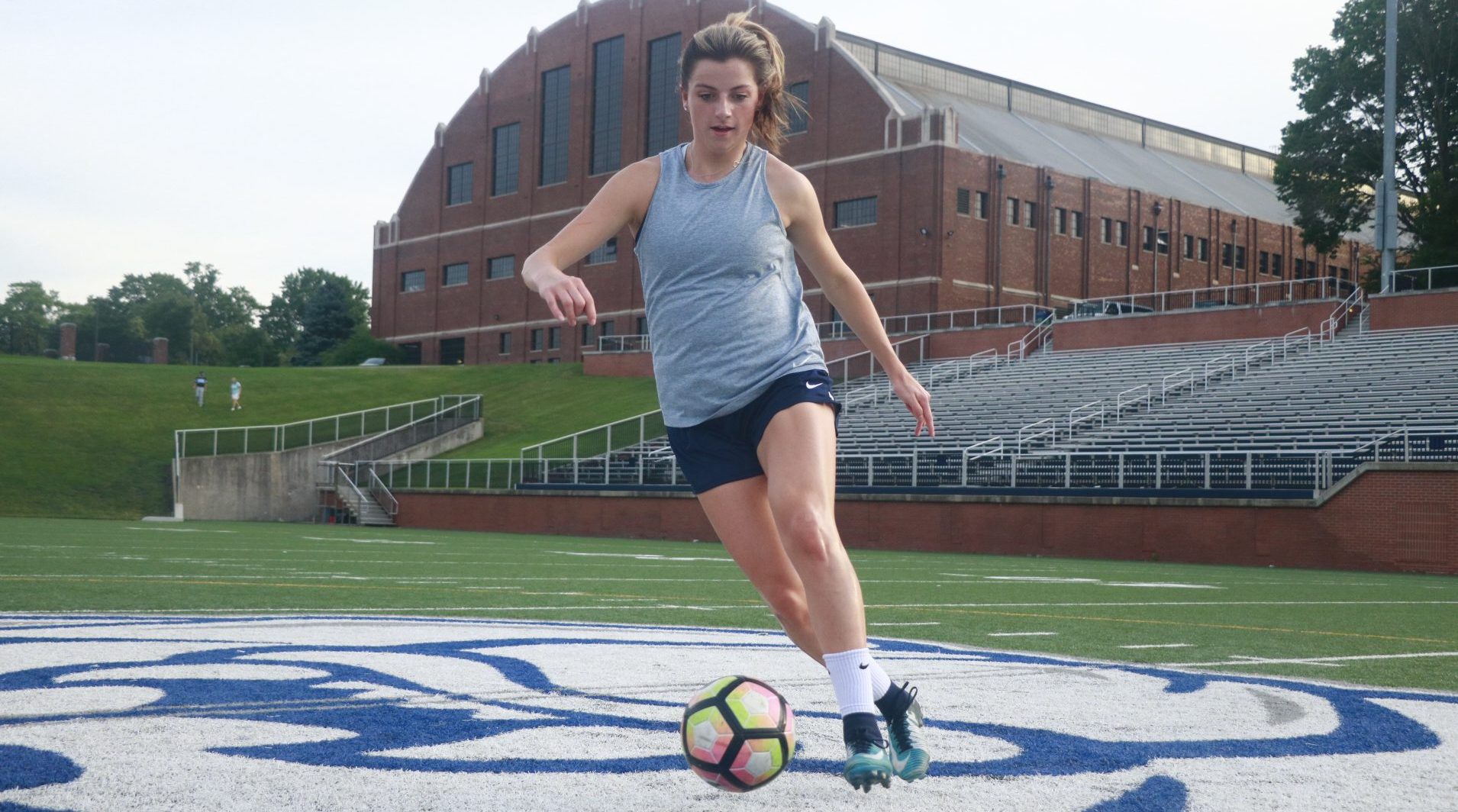 Paige Monaghan at the Sellick Bowl. Monaghan will graduate at the end of the fall semester to pursue a professional soccer career. Photo by Jimmy Lafakis.

Paige Monaghan shrieked for the soccer ball. She glided up the right side of the field, moving in the vein of a galloping gazelle. She received a touch pass from just outside the top of the penalty box, leaving one of two University of Notre Dame defenders mired in her tracks. The other defender took the proper angle to stop the Butler senior forward, but she might as well have been maneuvering in molasses.

How do you stop a gazelle?

Dribble, shoot, score. Just like that, unranked Butler took a quick 1-0 lead over the nation’s No. 20 team at the Sellick Bowl.

Freshmen midfielders Morgan Kloosterman and Katie Soderstrom added insurance goals before Monaghan decided she wanted to bookend the day with another goal to celebrate her mom’s birthday.

In the 89th minute, with nothing but green in front of her, she charged forward with a head of steam and beat the goalkeeper one last time. Happy birthday, mom.

Monaghan grinned from ear to ear as she sprinted to celebrate with teammates. It’s easy to smile when you’ve just clinched a 4-1 victory against a nationally-ranked team.

It’s easier to smile when you’ve prepared for those moments.

Bulldogs with a huge victory today over #20 Notre Dame. Here are the highlights. pic.twitter.com/oFHPQZwsCh

Monaghan has earned a spot on the 2018 MAC Hermann Trophy Watch List, was tabbed as the 2018 Big East Preseason Offensive Player of the Year and has a 2017 United Soccer Coaches second team All-American selection to her name.

When Monaghan was in elementary school, she shot at her backyard goal in Succasunna, New Jersey, to get extra reps in. Her older brother Jimmy, then in middle school, was with her. He knew his sister adored the sport, so he played goalie.

He was wearing boxing gloves, punching the balls out as his sister shot them.

“We thought it was a great idea,” Monaghan said. “It was the most ridiculous thing, but the best thing.”

To truly get to know Monaghan, you have to rewind the tape. Before Butler, before the backyard, before the boxing gloves.

Growing up, she would always run with her younger sister, Grace.

“It definitely turned into a running race,” Paige said. “I always want to be the be the best in everything. I thank my siblings for that. We’re a competitive bunch.”

She took dance classes from the ages of three to nine. When she turned nine, travel soccer started and Monaghan’s mom Christine told her daughter she had to make a decision: dance or soccer.

“You can’t do everything because there’s not enough time,” Christine Monaghan said. “It took her a long time to figure out what she wanted, but it panned out.”

Monaghan stuck with soccer, the sport she had been playing since she was three. It paid off.

Her high school coach, Justin Renna, told her parents that she needed to go to a bigger club if they wanted her to be better.

“My parents kind of laughed and were like, ‘OK, sure,’” Monaghan said. “So we did that.”

This journey of hers, it’s sort of crazy. That speed she used to zoom past the Notre Dame defenders in the game and her sister in the races? She’s known for it now. Her quickness is her quality.

Now, the girl who basically lived in her backyard has grown up.

In May, Monaghan earned an opportunity to hone her craft at one of the highest levels. She traveled to the U.S. Soccer National Training Center in Carson, California, as a member of the U.S. Under-23 Women’s National Team. She played matches as a defender during that camp, a different role than she plays for the Bulldogs.

“Being coached by the best of the best was unreal,” Monaghan said. “Being able to wear the U.S crest was an amazing experience. I only hope I can do that more, but I just have to keep working.”

Just keep working — three words her mom tried to instill in her daughter years ago.

“Even on my club team, I remember feeling like I wasn’t good enough,” Monaghan said. I was totally toward the bottom when I joined. I would cry. I would be like, ‘Mom, I’m bad.’ And she would say, ‘Just keep working.’”

Those conversations with her parents helped her. Another conversation with her high school coach steered her in the right direction.

She asked Renna if she was good enough to play in college. He replied, “Yeah, but do you?”

“I was like, ‘Wow, I really need to think about that,’” Monaghan said.

She had committed to Purdue University as a high school sophomore. Back then, current Butler assistant coach Robert Klatte coached the Boilermakers. In November 2014, the Lafayette Journal and Courier reported that Klatte would not be retained as head coach.

By that time, Paige had gained valuable experience by playing for Players Development Academy, an elite club based out of Somerset, New Jersey. Her life revolved around soccer. She constantly worked to perfect her game. She became a technically sound player.

Butler took a shot, too.

Butler co-head coach Rob Alman flew to New Jersey for an in-home visit. When he came back to Butler, he told co-head coach, St. John, “What a great kid.” St. John can remember thinking, ‘Man, I want this kid to be a part of our program.’

“Barry happened to be the first one out of the room and he said, ‘If there’s ever a four-year captain, that’s her,’” St. John recalled. “And he spent 15 minutes with her.”

For the last eight years, the Butler women’s soccer program has never elected captains, something Monaghan has benefited from.

“If you have two or three senior captains when she’s a freshman, Paige steps back,” St. John said. “But there were moments where Paige could step up as a leader, even as a freshman. By that design, I think we got the most out of her from her time as an underclassman.”

In the 2015 Big East Tournament, St. John’s University came in as the No. 1 seed. Butler earned the No. 4 seed. Although they gained momentum by beating Marquette University at home in the first round, they were the underdogs for the semifinals in Omaha.

The Bulldogs weathered the Red Storm, thanks to a 25-yard lightning strike off Paige’s right foot.

Her insurance goal turned out to be the decisive one, guiding Butler to a 2-1 victory. It was goal No. 4 for her on the season. She wears No. 4 on the field. Butler was the No. 4 seed.

“I just remember the seniors leading us and feeling so pumped,” Paige said. “When we won, I was speaking a mile a minute to the interviewer because I was so excited.”

She burst on the scene freshman year, made steady improvements sophomore year and received national acclaim junior year, with her final campaign serving as her career’s culmination. Her college tenure plays like a movie.

In the midst of that breakout junior season, the Bulldogs found themselves trapped in the middle of a horror flick.

On Oct. 26, 2017, the Bulldogs had an opportunity to clinch a No. 2 seed in the Big East Tournament by defeating Villanova University. If they lost, they had to wait and hope Providence lost to Creighton University.

When the Wildcats arrived at the Sellick Bowl, they aimed to play spoiler. The visitors scored off a free kick in the 25th minute, and the Bulldogs found themselves in uncharted territory.

The defensive side of the ball might not be box office material, but the home team had not trailed in a game all season. Butler’s defense was its ticket to success.

The plot thickened in the 79th minute, when Butler defender Annika Schmidt was fouled by a Wildcat in the penalty box.

This was one of those defining moments, and Paige yearned to put her team on her back. All she needed was a little help from her best friend, senior midfielder Madison Toth.

Toth looked at Monaghan. “Paige, you’re amazing. You’re great. You can do this.”

“She turned around, she looked at me, and she goes, ‘I needed that,’” Toth said.

Twenty-five seconds into overtime, Monaghan’s left foot sent a long ball sailing… sailing… softly into the back corner of the net. Butler made reservations for the Big East Tournament as the No. 2 seed. A golden goal.

“It was just the constant grit of that game,” Monaghan said. “Once you keep working like that, the cards have to fall.”

Paige Monaghan buries the golden goal at the start of OT to lock up the #2 seed for Butler pic.twitter.com/QEjvGKxg8m

The two teammates recall that penalty kick fondly, especially when they’re bonding over chicken burgers and sweet potatoes, cooking together in the kitchen and playing music.

“I look up to her,” Toth said. “I know everyone in our soccer class looks up to her and looks to her for support. She is a ray of sunshine in so many people’s lives, and definitely in my life.”

Her teammates reciprocate her unwavering support because they can empathize with her life. Monaghan said she is grateful for Toth and the entire team.

“In high school, I had only a small friend group,” Monaghan said. “No one understood that I couldn’t go to parties. When you go into college and you have your college soccer team, they know those feelings. It can seem crazy to some people, but it’s just the way we work.”

She made the decision to graduate from Butler’s Lacy School of Business and earn her marketing degree a semester early. Upon her December graduation, she plans to continue chasing her dream of becoming a professional soccer player. She will enter her name in February’s National Women’s Soccer League Draft.

Right now, she’s only focused on one thing: the next game.

A conversation with Alman before playing the University of Evansville helped spur that mentality.

Her coach said the game against the Purple Aces was the season’s most important. After Monaghan asked why, Alman said, “Because it’s the next game.”

“I’m a person who does think of the future, but I need to control the things I can control,” Monaghan said. “Right now, I have soccer at Butler to worry about. I definitely don’t want it to end. I can tell you that.”

Amidst her life’s twists, one constant has stood the test of time: her family’s unconditional support.

“She knows that she has us in her corner, 100 percent,” her brother Jimmy said. “She continues to amaze us, but it comes as no surprise to us.”

Monaghan has came a long way from the old backyard.