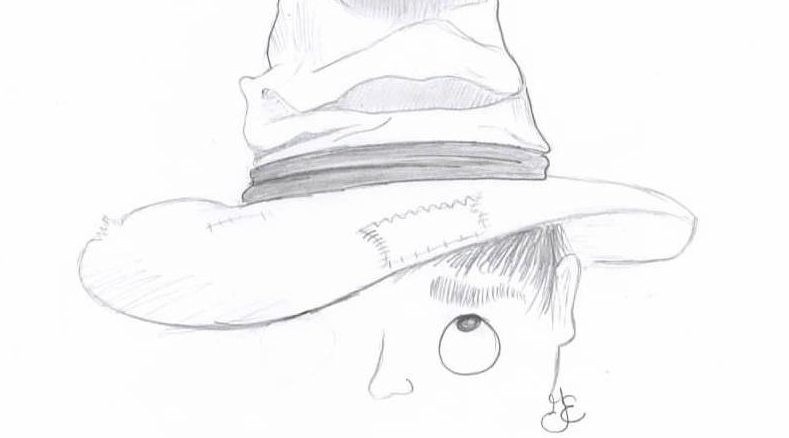 Forget Hogwarts,welcome to Hinkle. Danko is Dumbledore and this sorting hat knows right where you will fit in. Cartoon by Gabbie Evans.

Welcome to Butler! In wrapping up our Welcome Week activities, it’s time to sort you freshmen into houses.

It may as well be noted, now, that no one will actually call you a First Year. It’s too wordy, and you’re spoiled enough as it is. Some might be ‘“offended” by this. Cry me a river. The rest of us lived our neophyte year without air conditioning or palatable food.

We also had to WALK to a gym. Uphill both ways.

Can be easily spotted as the Type A sitting front and center in your 8 a.m. Her “bullet journal” planner is a dizzying feat of gel pen calligraphy. It details every hour, every minute, every second of her first semester. She maintains a pastel Instagram palette full of “inspirational” quotes. She plans her outfits a week ahead whilst sipping from a monogrammed coffee mug. Friends feel inadequate in her presence. She is irritatingly upbeat, which is why she’ll be hired as a Student Orientation Guide next year.

He gives Usain Bolt a run for his money. He’s spotted at 10:59, dashing from his filthy Fairview pod to Jordan Hall — lest he be marked absent in FYS.  Unfinished homework and C-Club receipts spill from his unzipped backpack. He bursts into the wrong classroom and is met with judgmental eyes of high-and-mighty sophomores. It’s painful to watch. We’re all too amused to tell him his professor certainly won’t be on time, either.

The Diamond in the Rough

During Welcome Week, this rare gem becomes the apple of every eye. They dive headfirst into cringey orientation icebreakers, and are the sole participants in Red Cup Culture conversations. Student Government wants them in their corner, but Dance Marathon snags them first. By September, they’re overcommitted but always show up to your improv show anyway. Any Greek bid is theirs for the taking.

She just wants to dance, Snapchat and have the men of Zeta Zeta Zeta remember her name. Problem is, in her dark leir known as a fraternity basement, she’s hard to distinguish between the other sixty females in black tank tops. So when Brad can’t recall if she’s Katelyn or Kelsie, it’s not meant as an insult. She should cut the guy a break — after all, he’s just trying to play enough Post Malone to keep a Butler “party” going.

No one knows their given names, but everyone recognizes The Girl with Blue Hair or the Boy with A Bad Calf Tattoo. In our relatively homogenous student body, those with any sort of nonconforming traits are exotic celebrities. Their middle parts and taste in 90s soft rock is envied by everyone at the surrounding Starbucks tables. We’ll be especially impressed if they *gasp* play guitar or carry a messenger bag!

Their hometown suburb is an hour and a half from the Windy City, but between the “W” flags covering their rooms and the plethora of Skydeck posts, you’d never know. Their tagline is “Well, I’m actually from Deerfield/Naperville/La Grange” etc. They worship a holy trinity of deep dish, hot dogs and popcorn— and consider The Bean a profound work of art. You can hear a tinge of their geographic lilt in the pronunciation of vowels. After a while, your ears will start to bleed.

He’s cut class once… maybe even twice! Immediately shunned as the poor student, this sap’s lack of motivation is well-known by Labor Day and the other fifteen kids in his classes find his attitutide repellant. His mediocrity is made evident by the overzealous efforts of every other student attending this university. Sadly, nine times out of ten, he’s transferred by spring.