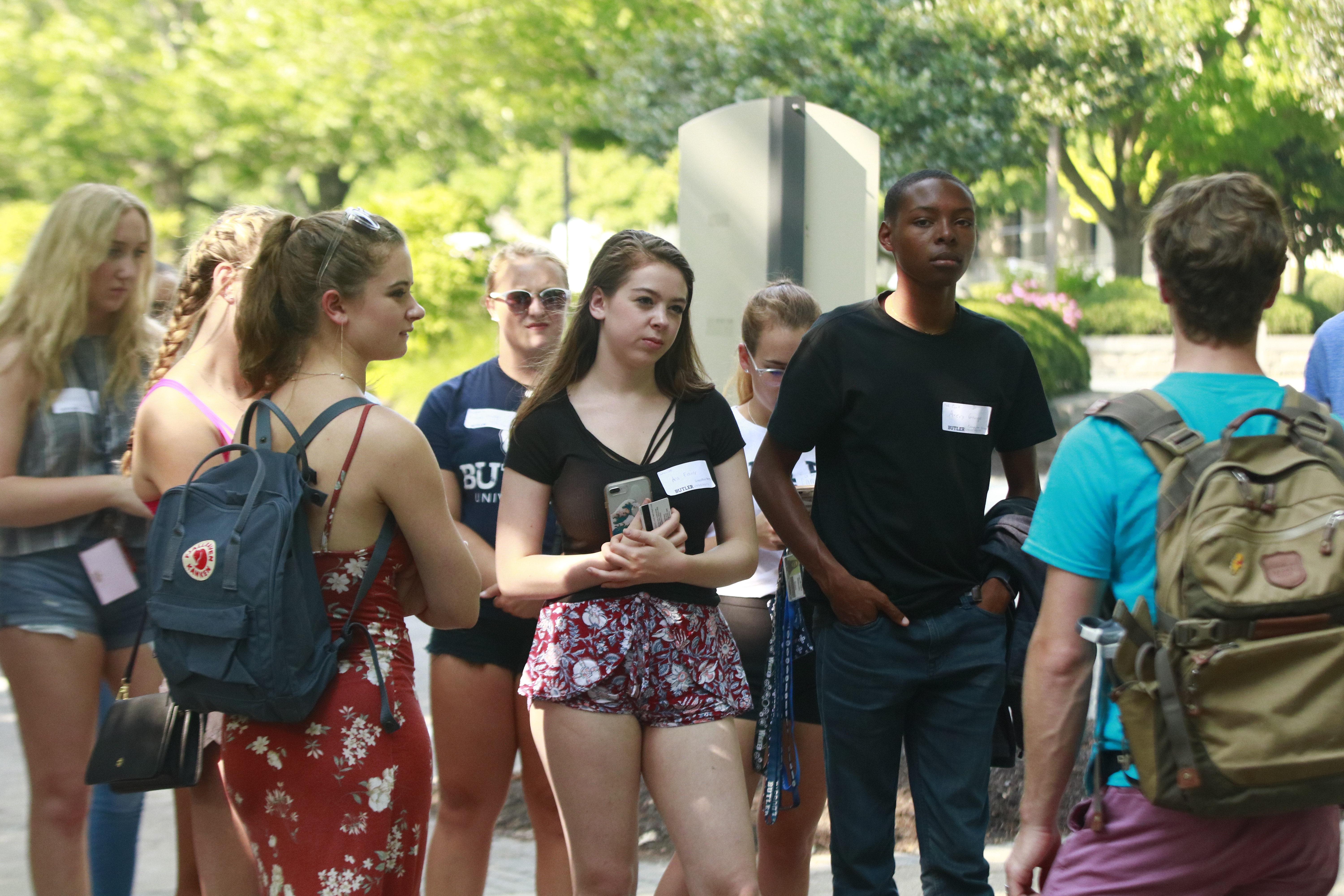 Getting orientated: while on a tour, first year students listen to their SOG during Welcome Week. Photo by Jimmy Lafakis.

Butler is amazing at creating events for you to feel busy, keep you excited and to meet a lot of friends. I urge you to attend all of them. It seems like a lot, but other first years want to make new friends as much as you do.

Not only do these events get you acclimated to campus, but they get you out of your comfort zone and are the beginning stages of the connections you’ll have for the next four years. You won’t join all of them, but go to club meetings and informational sessions. You’ll learn something new about campus and will recognize people who have similar interests as you.

The most important thing to remember about the beginning stages of being a Bulldog is to put yourself out there. Get out of your room, get off Instagram and pop your head into a random open door of a person you don’t know.

Sophomore political science major Ted Greanias said he thinks the most effective ways he has made friends in the past year involved situations you wouldn’t expect.

“You’ll find friends in the most awkward and distant situations so be open to be making those friends,” Greanias said.

Be open to conversation, chances are that cool girl wants to talk to you as much as you want to talk to her. There is absolutely no harm in a simple “hello.” You won’t be friends with everyone you meet, but you never know which friends will be the ones who stick.

Your roommate is a great asset to use for making friends at the beginning of the year. You’ll meet their friends, and your roomie will meet yours. It will be a big circle of friends. And if you aren’t making friends at the rate you think is normal, do not fret. Everyone’s friend timeline is different. Wait it out, don’t shut yourself off, and the right friends will find their way into your life, I promise.

As the year progresses, it’ll be harder to see the friends who are music majors if you’re in pharmacy. The business majors will see their history major friends less and less. You’ll most likely be the best friends with the ones you see every day. You’ll be studying with them and will have the same schedule because of your respective majors.

Second semester will roll along and you’ll feel a lot more like a Butler student. You’ve seen the late nights of Irwin Library and know your way around. Living on your own has forced you to figure yourself out.

Some people will join sororities and fraternities, and this will naturally alter your friend group, Greek or not. New classes shift these things too. You’ll be better at knowing where your priorities fall and which eggs you want to put into which basket.

Be careful during the next few months. Make sure the friends you’re putting a huge effort into keeping are giving that effort back. Classes start to get trickier, and this extra effort is exhausting. When your friends forget to text you back, they’re probably not even doing it maliciously. Growing apart is perfectly normal.

Some people are of the lucky few who will keep their friends they made the first week, but the rest of us have fallen out of friendships and made new ones countless times over. Everything happens for a reason, and some people aren’t meant to be your friend in the most innocent of ways.

Nolan Cardenas, a senior clarinet performance major, reflected on maintaining his friendships throughout his three years at Butler.

“Cherish the relationships you can see continuing and don’t be afraid to lose touch with people who are mutually losing touch with you,” Cardenas said.

As the end of your first year at Butler comes a close, you’ll look around while walking to class and see many people you met the first week and never spoke to again, you’ll see friends you fell out of touch with, and you’ll see strangers you’ve never met who will end up being your best friends.

Even though Welcome Week is over, don’t lose the enthusiasm to make new friends. Amazing people are all around you just waiting for an introduction. Don’t be afraid of that first “hello.”