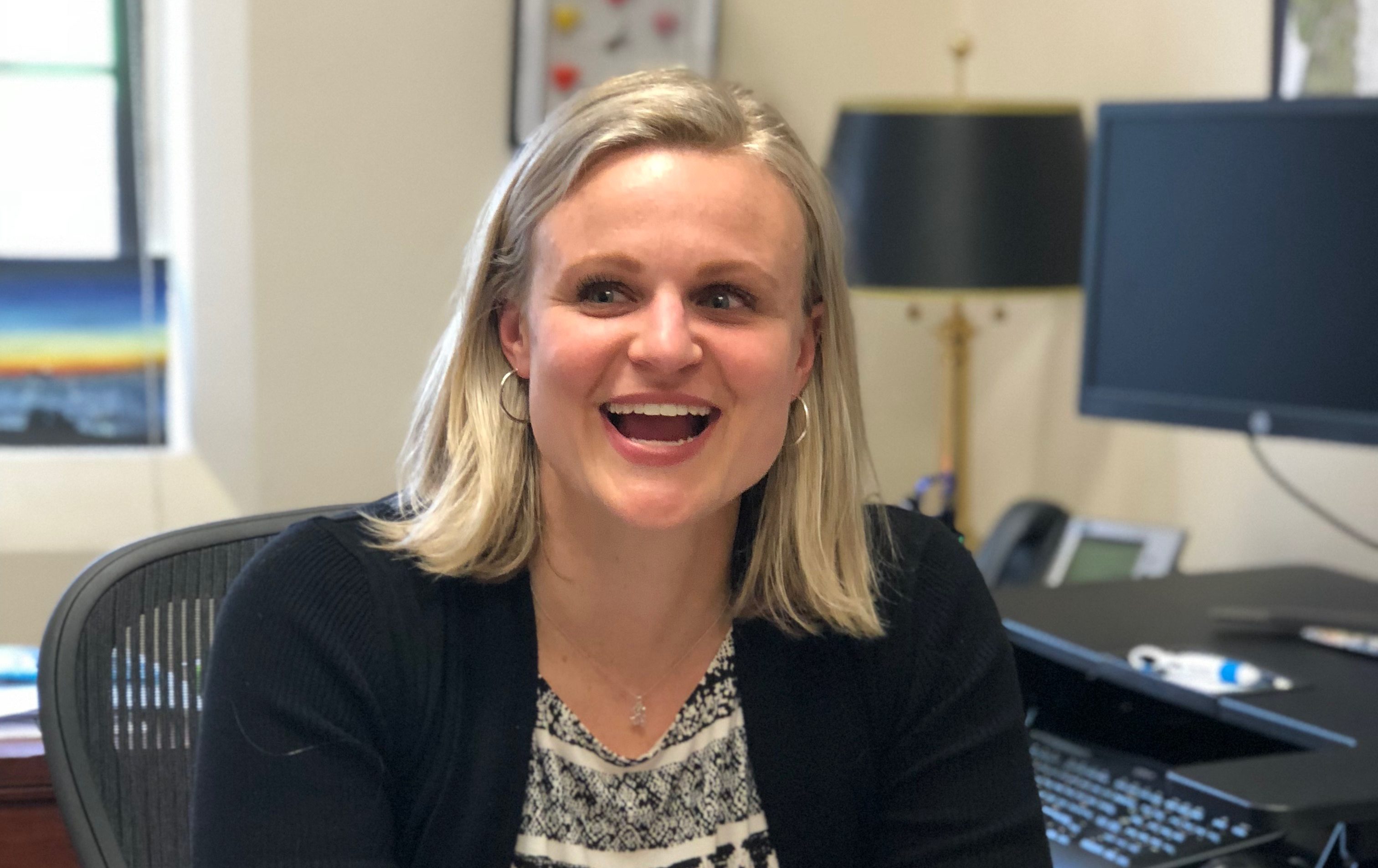 The Butler Collegian: Ultimately, why did you decide to come to Butler and take this position?

Jamie Brennan: … I kind of wanted to bring the show on the road to another university where they had lot of opportunities, maybe some challenges, but could use some assistance. I found that in Butler, I found that in a number of different universities, but really what struck me a lot about Butler was that there were so many awesome resources, awesome support, offices and administrators that really, really wanted to do the right thing. And a number of them told me over and over again, “We just want someone to take charge, really coordinate all of the efforts” — which as the Title IX coordinator that’s what I’m doing. And just looking for a leader in it. “Someone who can lead and guide us.”

TBC: Coming into this position, what was one big aspect you wanted to bring here from your experience at the past university you worked at?

JB: So, in all my previous positions — well, generally I am very mechanistic. I like standardizing things as much as possible. I like it to be rather predictive, if you will. And even just working within policies, when people know not only policies, but when they know procedures, when they know practices, when they know steps of action that are going to be taken, often times what’s ahead is not so scary for individuals. So, just knowing what is to come or what could be kind of takes some of the intimidation factor out of it. So, being able to implement systems here that either are more streamlined or that are more visible was something that I was really looking forward to. For example, at my previous institution I implemented, as simple as it sounds, just a collective content management system. So, everyone [in Title IX administration] has access to all the different files. You can see a case or matter as a whole. So, that’s not only really important for just clear communication to make sure everyone’s on the same page, but that’s just really good from a compliant standpoint as well. So, implementing [and] utilizing those systems and teaching others to utilize them and see the benefits of them is really important.

TBC: So, is a content management system something Butler has in place now?

JB: So, we do have it in place, and I’ve really worked with my team and everyone’s going to be using it. Everything’s all in one, nice area for us.

TBC: What is the policy for students if they want to report a sexual harassment or sexual assault case?

TBC: In the grand scheme of reporting those cases, where do you come into play?

JB: So, the vast majority of employees at the university are considered responsible employees. And the law defines that as anyone that could be in an actual or perceived position of authority that could redress any sort of sexual harassment behaviors. So, all of those responsible employees are obligated to inform me, as the Title IX coordinator, of whatever happened — any and all information. Then it’s my responsibility, as the Title IX coordinator, to address any type of reports. And the way I go about doing it is just sending simple outreach to someone and seeing if they respond back. No one is required to respond back to me, I can’t force anyone to come and speak with me. You know, I always hope that they do, but you know, I have a standard outreach email [in which] I let them know about various rights and options that they have. And I let them know about my position, that as the Title IX coordinator, I’m responsible for X, Y and Z, if you would like to come talk with me.

TBC: Can students report cases that did not necessarily involve them?

TBC: And what does that process look like, then? Is the person involved contacted, or how does that work?

JB: So, I can take — the Title IX coordinator anywhere can take — a report any which way they might come. Directly from a parent. I think here at Butler it’s called “Silent Watch,” which is anonymous reporting. It could come from a student, anyone. And then depending on the information I have — depending on if it’s anonymous and I need clarifying information, there’s probably not much I can do with it — but depending on the information I have, I will do my due diligence in finding out as much as I can about a matter.

TBC: So, circling back to policy and changes you have made or would like to make, what are some of those — other than the content management system?

JB: I always appreciate having the clearest communication. So, when a complainant or respondent initially speaks with me — I speak to all of them when they come in — they get kind of a rights and resources form. One for a complainant, one for a respondent. They are basically the same. It lets them know, kind of, in documentation form about the different informal and formal resolution options for having a matter go through the Title IX process. It lets them know that they can report to police, that they can even just talk to police about the matter and see what it might look like. It informs them about the privacy rights and how much my confidentiality extends, which is on a need-to-know basis. It lets them know that we can provide interim remedies to complainants or respondents if they need any academic, social or employment-related assistance or accommodation. So, putting that into place and allowing individuals to see their options, and although all that’s in the policy, we know that not individual’s first option is going to pick up like, a 25-page some-odd page policy and read it. They come in to speak. They’ve gone through a lot of trauma or stress; here’s the highlighted information that you might need. And people have really appreciated that. And then, you know, I send it back with them and they can share it with whoever they deem is necessary.

TBC: You said you wanted to go to a place that presented some challenges. So, at the start of the semester [the university] had some challenges presented when the IndyStar article came out about a sexual assault that happened in 2016… Could you describe what campus was like for you post-article, both as the Title IX coordinator and someone new to campus?

JB: So, I worked with Sara [Minor] and Sara [Diaz] to go speak to SGA and hear from SGA about what the students wanted to see on campus, what was kind of the students response. And of course, as you know, I barely know anything about what happened besides just in doing my own research for the position and what I saw online, which was a lot of Butler Collegian articles from 2015 when other stuff happened. But what campus was like for me afterward, I did have some reports. People came in. I was expecting that. You know, when something happens and it makes it more visible, it makes people that have been affected by something in the past, it triggers them — to think about something that happened, to remember it, maybe something that they pushed down and it starts coming back up again. They’re talking about with their friends. They’re saying, “Hey, that might not have been OK. That might have been inappropriate. What can we do about that?” … I was hoping that someone out there who might have been affected, who might have maybe wanted to report — I just hope that everyone who wanted to report came forward and that whatever bad or good happened before they don’t attribute me to that. I’m me, and I’m new, and I’m trying to go forward, and I want to stay positive.

TBC:  We’ve kind of talked about this already, but what’s something, whether it’s in the works now or hasn’t started yet, that you would like to bring to your role here in the next few years?

JB: … One thing that I do know that is in the pipeline, which I’m really excited about, is hiring a full-time civil rights investigator. Which I know [Frank] Ross mentioned that. Having that person who’s really sole expertise is in doing these types of investigations. So, that is going to be awesome. Are you talking about like, my utopia?

JB: Having a full-time person is going to be great. I think just improving the visibility on campus so that Title IX isn’t seen as something negative. I don’t know how many people view it as negative, but really… I’m not here to speak for a survivor. I’m not here to speak for an accused or a respondent or a complainant. I’m here to make sure that we can all be in a place that’s free from sex and gender discrimination. And if someone does, in the unfortunate circumstances, experience it and if someone is in the unfortunate circumstance where they are accused of it, that they get that they are treated fairly and equitably throughout the process. That their voices are heard. That they are still able to be successful — unless that right of education is taken away from them because may have been found responsible for a policy violation. But knowing that no matter who someone interacts with — and I say Title IX team because there are a number of different people throughout the university that have a little bit of Title IX responsibilities — but knowing if you’re going to interact with Title IX, yes, it prohibits sex and gender discrimination in educational programs that receive federal financial assistance. And yes, you are going to be heard. And yes, you’re going to be treated equitably and fairly no matter what side of the coin you are on. I mean, that’s why the law was written — to not prohibit people from being able to access X, Y or Z. So, I want that to be known throughout campus — that really, Title IX is a positive thing. I mean, it’s here for the better of, you know, it’s not just colleges; it’s here for the better of all educational institutions. And how infiltrated this is in our culture, we’re still finding out. How infiltrated it is in Butler’s culture, which I’m still learning. You know, we’re still finding out. So, people —I don’t want people to be scared of me either. I try not to be too scary.