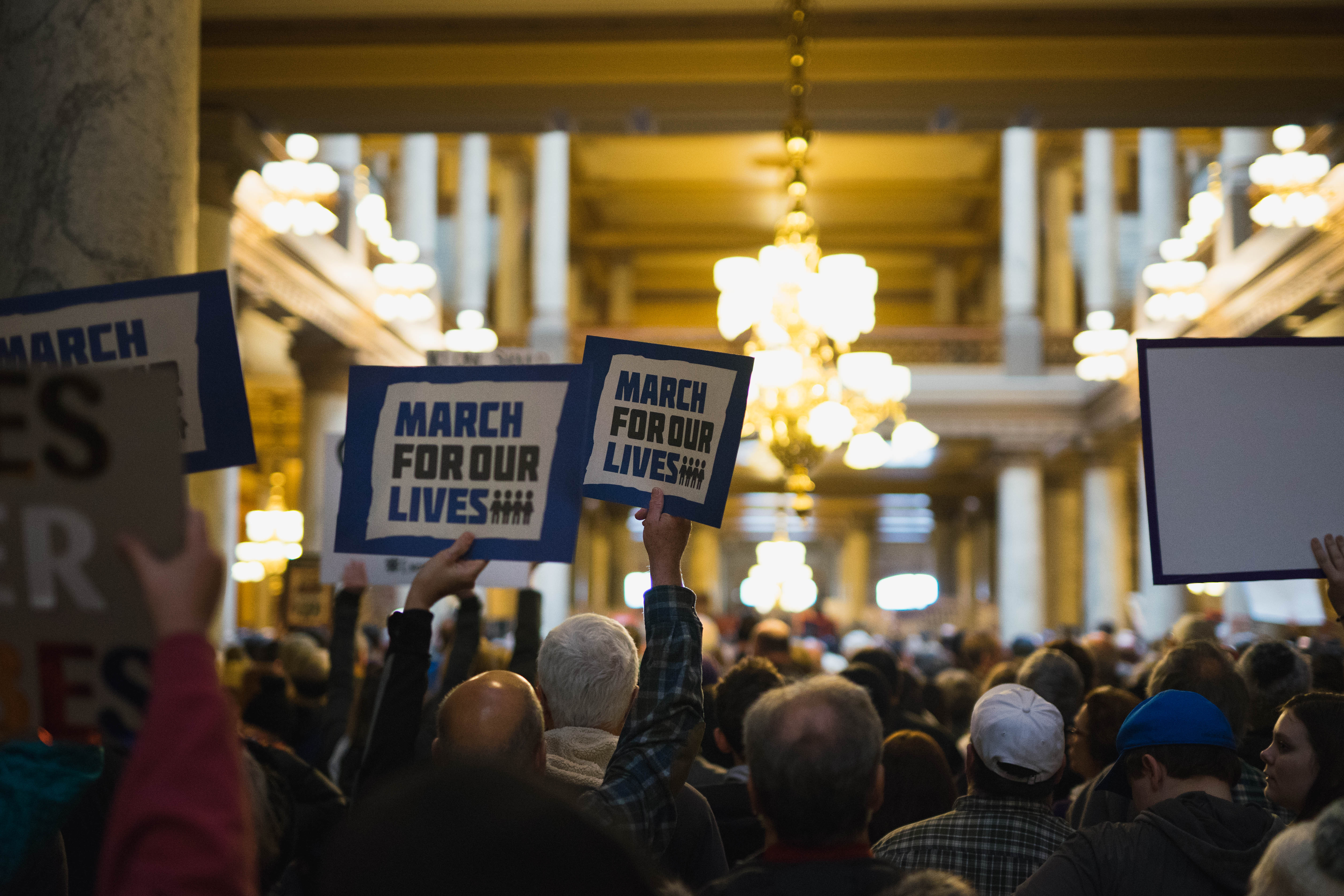 Protestors gather inside the Indiana Statehouse. Photo by Adam Cvik.

It was March 24, 2018 — five and a half weeks after a man named Nikolas Cruz killed 17 people and wounded 15 more at Marjory Stoneman Douglas High School in Parkland, Florida. And on Saturday, millions of people across the nation gathered in their cities to peacefully protest gun violence and rally for gun control in a demonstration called “March for Our Lives.”

Thousands of people went to the Indianapolis demonstration organized by the “We LIVE” activism group held inside the Statehouse downtown at 11 a.m. Speakers included Senator Joe Donnelly, Representative André Carson and Indiana native singer Kevon Edmonds. Among the thousands were Butler students and staff.

“I thought it was really great to see how many people came out,” junior elementary education and peace and conflict studies major Lucy Allan said. “The event itself was very well-run. One of [the speaker’s] friends had just moved to Parkland and she obviously was in the school when the shooting happened, so I think that made it more personable. It made me realize even more how important advocating for gun control is.”

March for Our Lives – Indianapolis pic.twitter.com/9fkHJC6osH

Allan was one of several Butler students that came in a group organized by her friend, junior political science and peace and conflict studies major Libbi Adams. Adams, an intern for a local political campaign, has been politically active for years. She is the vice president of Butler’s College Democrats.

“This specific topic is something that predominantly affects Americans,” Adams said, “And it’s something that…we as students especially fear. There is always a possibility that [a school shooting] could happen, and the fact that that’s even in the realm of possibilities is ridiculous.”

Allan sees the topic of gun control as a human rights issue. Part of Allan’s reason for going to the March For Our Lives is that she is a future educator.

“We’ve seen this happen in schools, which is one of my biggest concerns, but obviously it can happen anywhere,” Allan said. “It’s gotten to the point where it’s like, ‘Why aren’t they doing anything about it?’”

President Donald Trump and several legislators have suggested that arming teachers with guns is a way to keep schools safer. Florida Governor Rick Scott signed a bill days after the shooting which raised the age to buy a rifle from 18 to 21. It also allows law enforcement to temporarily seize guns from the mentally ill, and allows teachers to be armed.

Man brings rifle to March for Our Lives protest at Indiana Statehouse https://t.co/EKWtOVrFZ6

The line was so long to get inside the Statehouse that Margaret Brabant, a professor in the political science department, could not get in. After a while, people could not be let in because the Statehouse was full. She called this fact “spectacular.”

There was one incident outside the Statehouse during the rally. A man carrying an AR-15 rifle engaged in a heated discussion with several people attending the rally outside. Brabant said one of the ralliers looked to be in high school.

“I stepped between her and the man and said, ‘He’s not worth it; you are,’” Brabant said. “And her face just lit up. She just smiled at me. And it was one of those moments where it was like, this is common cause. This is people who are listening to each other and trying to make positive change.”

The Indiana State Police eventually arrived and defused the situation.

Brabant went to the march because she wanted to participate in a moment of historical change. She firmly believes that this movement is different.

Marchers in and outside the Indiana Statehouse. Photos by Adam Cvik.

Senior chemistry major Celeste Smith supports March For Our Lives and gun control, but finds the movement limited in its scope because it often ignores the militarization of police forces and police brutality.

“The Parkland massacre was horrible and terrible and 17 people lost their lives and the surviving students started this movement that has rallied the whole country and millions of people have protested on Saturday but a lot of these people weren’t at Black Lives Matter rallies,” Smith said

Smith said she supports progressive movements like March For Our Lives and Women’s March, but “These movements lack intersectionality,” Smith said.

Brabant said that this movement is different because the Parkland survivors know how to use technology and media to get their message out. They also are not afraid to confront politicians about their stances on gun control. Brabant said it is important to contact local officials and let your voice be heard.

“I’m not giving up. It is my responsibility as a citizen of the United States to notify my representatives,” Brabant said. She said that she is paying attention to them, has opinions and follows the news. “I understand solutions are not readily implemented but it is still my responsibility as a citizen to contact my local officials and let them know I’m watching them.”