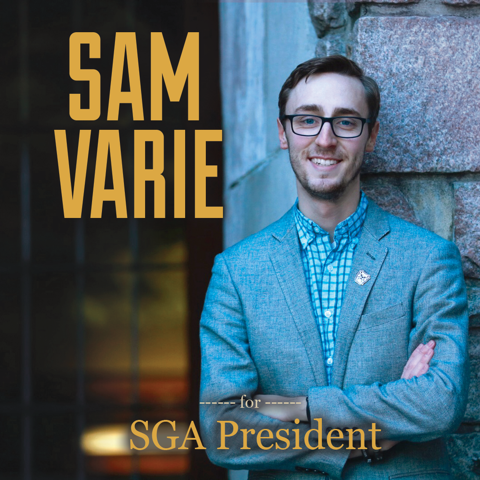 The results of the Feb. 26 election were announced to students via SGA’s social media pages and via email by Associate Director of Student Affairs Meg Haggerty on behalf of the SGA Election Oversight Committee the morning of March 1.

As SGA president, Varie’s three main initiatives include administrative accountability, SGA accessibility and an inclusive community. With the idea of SGA accessibility, Varie has made it a point to commit to being an accessible president.

“As one of the few openly gay, non-affiliated presidents, I am honored to represent those communities and appreciate my student peers who elected me to not only support those students, but every student, regardless of their identity or home,” Varie said in an email to The Collegian.

Varie has pledged to host all-student forums to allow all members of the Butler community to participate in conversations about difficult campus issues.

“As your SGA president, I will always have the time to sit down with you and listen to your concerns and ensure that you will walk away knowing I will create action for you,” Varie said in a video on his Instagram account.

“As a first-year, I found my home in SGA within a community of advocates and leaders,” Varie said. “I look forward to continuing to foster that same community for many students to come.”

This year’s SGA election had two outside influences: new election rules and new technology difficulties. The new rules included a prohibition on cabinet members endorsing any candidate. The main technological issue concerned the submit button on the voting page. It took students several clicks to submit their votes, and error messages were frequent.

These students range from first year Angela Kotsonis mentioning that “Varie sparked her interest in SGA, and helped her to become an SGA senator.”

“Varie has already put in countless hours of hard work to help bridge the gap between Independent and Greek students,” Keiger said.

Also on the Instagram page, junior Emily Nettensheim stated that she planned to vote for Varie.

“In my experience working with Sam on the executive board of BUDM, I witnessed his character during high stress, high tension situations,” Nettensheim said.

Senior Maree Smith recommended Varie for president because she works with him on SGA’s Student Initiative Board and knows that “once he has a goal, he will work passionately until it is complete.”

As SGA president, Varie will serve as a liaison between students and administration and lead the SGA Senate.

SGA also announced the election results for Class Officers this morning for the classes of 2019, 2020, and 2021. The announcement can be found on SGA’s Twitter account.