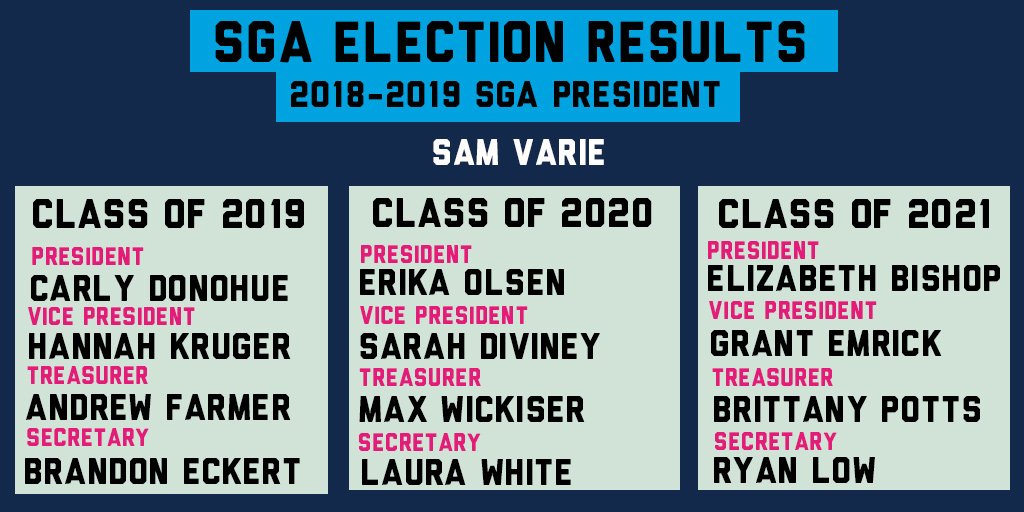 A compilation of the newly elected class officers for each class. Graphic courtesy of Butler SGA’s Twitter.

At Butler, sidewalk chalk can only mean one thing: an election is underway. These colorful advertisements, along with various posters, called for students to raise their voices and vote in this year’s Student Government Association election.

The class officers for next year’s sophomore, junior and senior classes were also announced, with a runoff election for sophomore vice president occuring on Fri Mar 2. In the runoff, first-year marketing major Grant Emrick was victorious over Jared Baysinger.

Congratulations! Here are your winners of the 2018 class officer elections!! Thank you to all of the strong leaders who campaigned! pic.twitter.com/FpQaX5WFP8

Regardless of the candidate, one constant issue throughout the election was a faulty voting button. When students tried to submit their votes, several different error messages would appear.

Robert Hartman, the Student Affairs IT account manager, assisted the Election Oversight Committee with building and testing the election ballots. The most common error was that students were logged in to a non-Butler Google account, thus preventing them from accessing the ballots.

“This was a condition that was tested for during the rigorous testing that took place ahead of the general election and the issue never presented itself,” Hartman said. “So, at this time, we’re unclear as to what an appropriate solution would look like. The possibility exists that we have inadvertently uncovered a bug in the Qualtrics system, and IT will continue to investigate the matter beyond the elections to ensure that this issue doesn’t occur in the future.”

Hartman and the IT Department stressed that students should read and consider all instructions provided in university communications. Students that clicked multiple times through the error messages were usually brought to the ballots.

Along with his campaign platform, Varie believes there are barriers between students, administrators and campus authorities. Examples of such authorities include BUPD and Title IX administrators.

“The most important thing we can do to address that is have transparent dialogues that are challenging but respectful between each group,” Varie said. “How are we giving each student a seat at the table to voice their concerns?”

Another group that put forth a considerable amount of effort for the SGA elections were each candidate’s campaign teams. Varie’s central campaign team consisted of 10 core students, as well as about 30 campaign ambassadors within different organizations on campus.

Some of the central campaign team’s jobs ranged from running social media to helping drive strategy. Varie said his campaign approach is to engage with every corner of campus.

“My strategy was to be me and be authentic and genuine,” Varie said. “Everywhere I went I tried to engage with the students I was in front of and listen to their concerns, ask hard questions and learn how we can take action as a community.”

In addition, Varie had students on his campaign team that represented several Greek houses, athletes, commuters and underclassmen. Varie wanted to spread the message to every silo of campus that SGA can be a voice for these organizations.

Emrick, who won the runoff election for class of 2021 vice president, had a positive campaign process as well, due to the amount of friends and students that volunteered to endorse his candidacy by posting on social media.

“Having people voluntarily offer their support towards my campaign felt very rewarding and I have managed to establish countless connections throughout the class of 2021,” Emrick said. “I was proud of myself for being one of the first ones to hang up posters, post to social media, as well as put chalk down at 8 a.m. on a Sunday morning.”

Emrick originally ran against four other candidates for class vice president, but on March 1, the runoff election was announced.

Emrick was elected under the following goals: developing a standard to value all students’ opinions, improving physical campus elements which include the abandoned TKE fraternity house and the outdated drainage system.

Emrick said he lives across the hall from class of 2021 president Elizabeth Bishop in ResCo. Bishop, a marketing and strategic communication major, was the incumbent for president of the class of 2021 and won the election with the hashtag #LizzyB4Me.

Bishops priorities as president include improving the Butler experience through improving structural problems.

“I see the class president position as an amazing opportunity to connect Butler students and maximize the benefits that students receive on campus,” Bishop said.

Bishop and Emrick have also already started to discuss how to effectively bring the class together and make popular improvements on campus.

These students and other election winners will begin their official terms at the start of the 2018-2019 school year, Aug. 22.