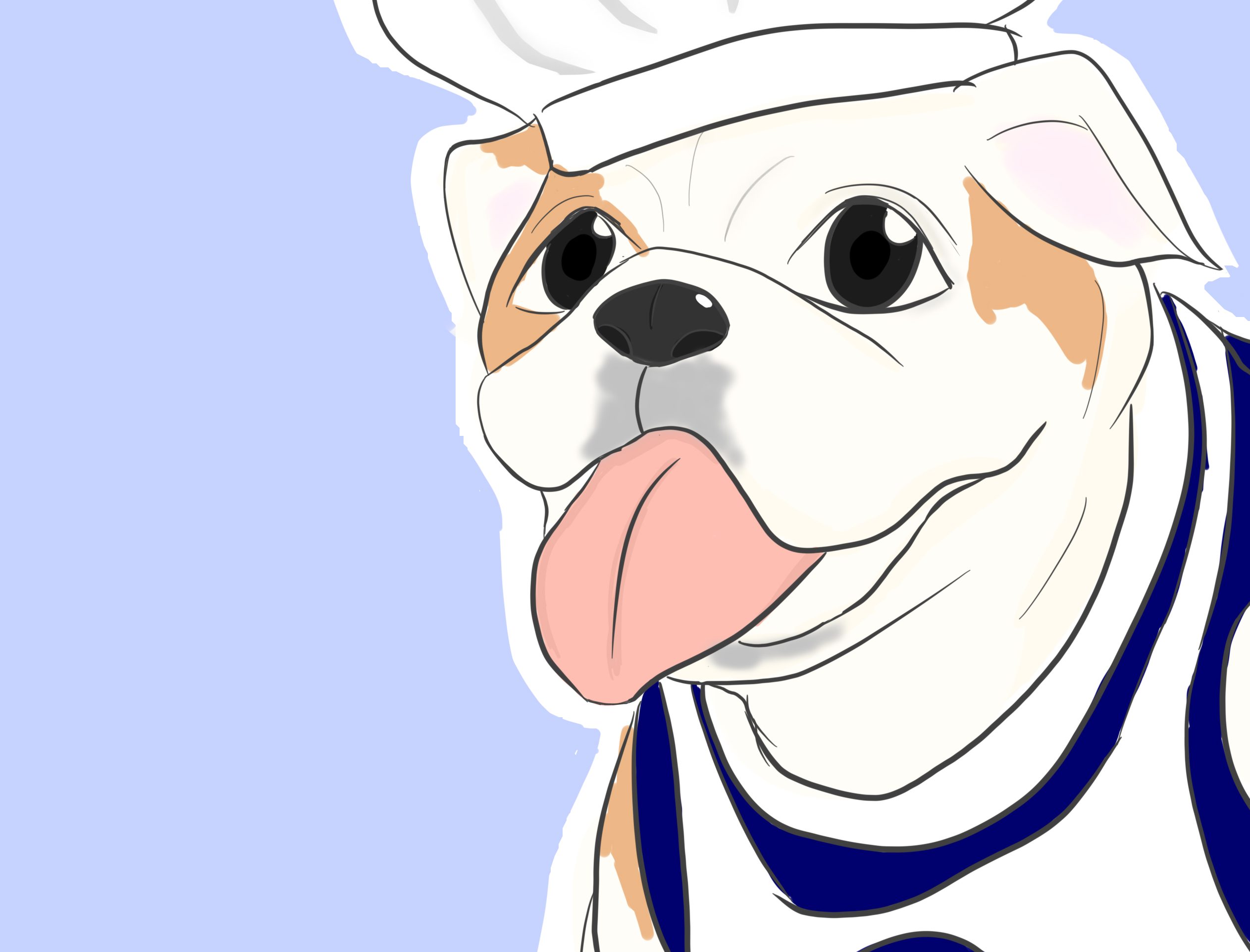 The cover of the cookbook features Trip. The cover was created by a student in the class who aspires to be a children’s book illustrator. Photo courtesy of Catherine Pangan.

Spaghetti or biscuits and gravy? One is his mom’s speciality and served every Christmas. The other, though, is a staple in the Brunk household that is enjoyed on Christmas morning.

Meredith Coughlin, on the other hand, has already submitted her recipe: Nana’s bread dressing. Taught to her when she was a little girl, she still cooks it every Thanksgiving, and it doesn’t taste the same anywhere else.

Spaghetti, biscuits and gravy, bread dressing — whatever the recipe is, there is some sort of nostalgia attached to it. At least, that’s what Joey Brunk has noticed.

As a sophomore elementary education major, Brunk is one of the project managers for “Dawgs Gotta Eat.”

“Dawgs Gotta Eat” is a cookbook comprised of recipes submitted by members of the Butler community. The book is a class project created by the students in ED 453 Perspective in Leadership.

All the funds raised will go toward Riley Hospital for Children.

“We just appreciate people’s contributions,” Pangan said. “The students in the leadership class are so — they made this project so authentic and they really bring their passions in, which is great to see as a professor it all come together.”

Coughlin, senior organizational communication human leadership major, said the class project helps every individual hone their own leadership skills. Students can take part in many different responsibilities, such as marketing and editing content. She is part of the promotional video team.

“This is a really different type of class,” Pangan said. “We use the project approach to scaffold the idea of leadership and the power of each individual’s contribution to leadership. We have a backbone structure of the class, but all the students contribute ideas to something big they want to contribute in the future and we kind of mesh those ideas together and then do a big class project.”

The cookbook itself is a recipe of big ideas and goals from students in the class.

One student wants to connect with others and hear their stories. So, the cookbook also shares the family story behind each recipe.

The cookbook’s cover — which features Butler’s main Dawg, Trip — is made by a student who wishes to be a children’s book illustrator.

Another student wants to direct a sitcom, so perhaps the promotional video will now have a humorous spin to it.

“Leadership doesn’t have to be this giant, controlling ruler,” Brunk said. “There can be a lot of leadership through small things like encouragement, taking the lead on something, stepping outside of yourself to do something.”

Everyone is being a leader by taking the initiative to send out emails or ask for recipe donations, Brunk said. Just being a part of something bigger than a regular class — working toward making the cookbook rather than a good grade — is leadership in itself.

People can submit a variety of different recipes; the cookbook brings people together Brunk said.

While first-year psychology major Madison Eden has not submitted a recipe, she thought of her mother’s chocolate chip cookies. Apparently, the trick for a soft and gooey center is Jell-O pudding. Eden does not remember where her mother got the recipe from, but it hits the spot every time.

Pangan’s personal favorite recipe is the macaroons from the College of Education’s dean, Ena Shelley. She plans on trying that bread dressing, though.

“The whole point of the cookbook is to build community around Butler and highlight aspects of people others may not know about,” Pangan said.

Charlotte Hilker, first-year communication sciences and disorders major, said while Butler is not known for its diversity, it would be interesting to see what diverse dishes will be in the cookbook. A vegetarian herself, Hilker said she would also look out for recipes with certain dietary needs.

“It’s really representative of the diverse community that we want to showcase through the book,” Brunk said. “Because the whole point is to show all the different people, the different cultures and the different ways people live, all of that kind of stuff. … So, it’s just a cool thing getting people from different walks of life.”

Brunk, a member of the men’s basketball team, said his favorite recipes are from the people he knows personally.

LaVall Jordan, men’s basketball head coach, and his wife submitted a recipe for lettuce wraps. Thad Matta ‘90, former basketball head coach and Butler student, also submitted a recipe, and Brunk said he thought it was “pretty cool” that he heard about the project. Brunk’s teammate on the court, Kamar Baldwin, is working on getting a recipe from his mom.

“We have to have a portion for that,” Brunk said.

The class will continue to receive recipes until tomorrow. The book will go on sale Dec. 7 for $10, but pre-orders will also be available. Brunk said in an effort to be more accessible, they will also accept Venmo.

“Hopefully people think it’s a great holiday gift regardless what you celebrate,” Brunk said, “or something great to surprise a loved one with, or whoever it may be — a Butler fan.”