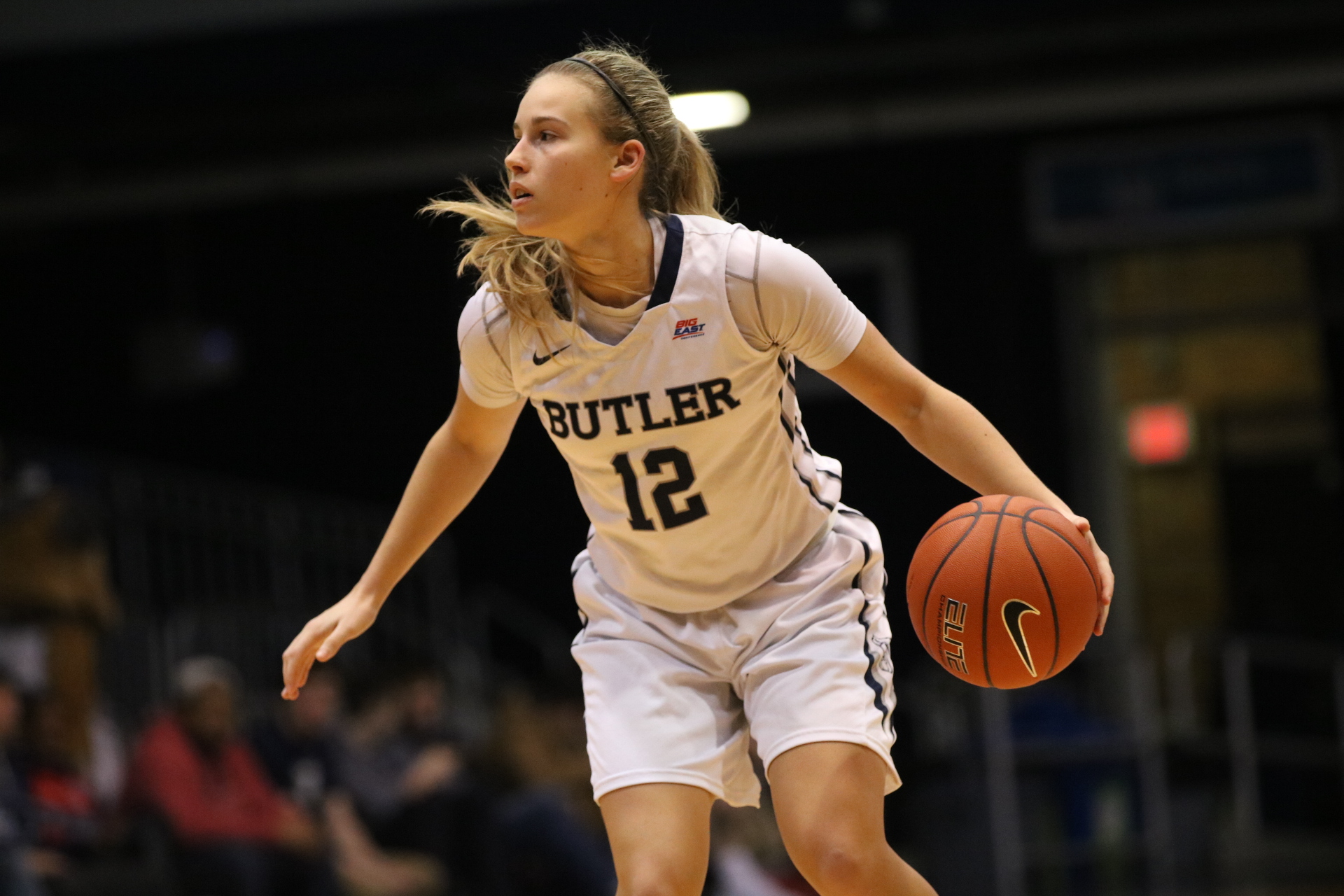 Sydney Buck scans the floor for an open teammate. Photo by Jimmy Lafakis.

Butler women’s basketball guard Sydney Buck never missed a basketball game — until this year. At Homestead High School in Fort Wayne, she was a four-year varsity letterwinner and three-year starter. At Butler, she started every single game for the Bulldogs: 30 her freshman year and 31 her sophomore year.

“In her whole career, she’d never missed a game for any injury or anything,” Sydney’s father Steve Buck said.

Buck sprained her ankle going into the season. She started the first three games of the year and played through the pain until the win over Fort Wayne. She had a chipped bone inside her ankle, which required surgery.

“Playing injured is pretty tough,” Buck said. “I didn’t feel very good, so I decided to just get the surgery over with.”

Buck had surgery Nov. 18. She was in a cast for several weeks after the ankle surgery. Once she got the cast removed, she began to work to get back on the Hinkle hardwood.

“I was in a cast for a couple weeks and I couldn’t do too much then,” she said. “After that, I started riding a bike, getting on the water treadmill, trying to get my strength back.”

Once she passed through physical therapy for her ankle, she then had to return to mid-season form.

Buck’s first game upon returning was in the team’s overtime win at Xavier University Jan. 8 after missing eight games. She has come off of the bench in every game since the injury. In the two most recent home losses against Villanova University and Georgetown University, Buck hit her stride, adding 19 and 18 points, respectively.

“She was a little impatient, I think,” Steve said. “She was eager to get back. It’s nice to see she has her rhythm back now and is able to help the team.”

Buck, like many of her teammates on the women’s basketball team, chose to stay in-state for college basketball. She did not want to be far from home because she wanted her parents, Steve and Stacy, to be able to watch her play. Buck also wanted a school with exceptional academics.

“With the history and the school and the program, it was really a no brainer,” Steve said of his daughter’s choice. “When the offer came in from Butler, it was an easy decision for her.”

Though she has plenty of experience in college basketball now, she has inherited a new leadership role this season. Buck is one of three juniors on this years senior-less team, and she is the only one who had played for Butler and Head Coach Kurt Godlevske in the past. The others, Kaela Hodges and Whitney Jennings, are both transfers. Hodges comes in from Wabash Valley College, while Jennings played last season at University of Iowa. Due to NCAA transfer rules, Jennings has to sit out this season.

Buck had similar experience in high school with being a lone leader. She was the only senior on her team at Homestead in 2014. However, she was able to lead that squad to a 23-2 record, along with a conference and sectional championship.

“Playing so much my freshman and sophomore year gave me more experience,” Buck said. “It was hard to balance the leadership role through the injury, but I’m starting to get back into it.”

Godlevske said Buck has many characteristics that are ideal for a leader.

“She has a tremendous work ethic; she’s coachable and listens well,” he said. “She brings a calmness on the floor and understands how we need to play.”

On the court, Buck plays the role of a three-point specialist. She has made 146 career three-point field goals, sixth all time in Butler women’s basketball history. Godlevske said her presence on the floor not only helps her and the team, but her teammates as well.

“She’s a threat,” he said. “People have to guard her and that opens up things for other players.”

When you ask her what she likes outside of basketball, her answer is watching basketball.

“She’s a basketball junkie,” Godlevske said. “Nobody on the team watches more basketball on TV than her.”

Aside from winning basketball games, Buck is passionate about her schoolwork, majoring in finance and marketing.

“I love basketball,” she said. “I’d like to go into business, and if it had something to do with sports, that’d be great.”

Buck comes from a family with a northeast Indiana basketball pedigree. She has three siblings who play basketball: Savannah is a sophomore at University of St. Francis in Fort Wayne, while her youngest siblings, Sam and Sophia, play at Homestead.

Her grandfather, Keith Spahr, is a member of the Huntington College (now Huntington University) Athletic Hall of Fame. He coached the men’s basketball team from 1970 to 1983.

“She’s been around it her whole life,” Steve Buck said. “She loves the game.”