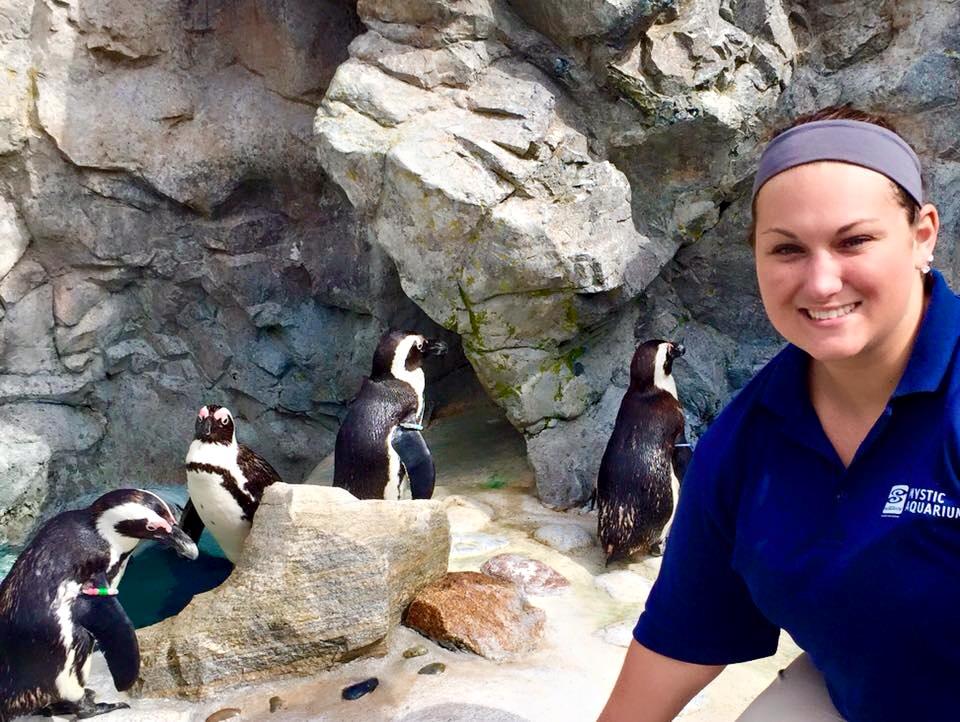 Butler senior Carah Austin loved penguins since she was a little girl, all thanks to a life-sized emperor penguin stuffed animal her dad bought her.

This summer, she went to Mystic, Connecticut, to research African penguins at Mystic Aquarium. She discovered her research opportunity unconventionally.

“I literally just Googled penguin research internships and was so happy when I found the Mystic Aquarium opportunity,” Austin said.

The biology major is in the university honors program, so Austin is required to write a thesis in order to graduate.

“I figured if I have to write a 40 page paper, it might as well be over something I love, so I chose penguins,” she said.

Austin presented at Butler’s Undergraduate Research Conference on Friday, April 8. Her presentation revolved around molt abnormalities in African penguins that live in aquariums and zoos.

Molting is the annual shedding of skin and hair, or in the African penguins’ case, their feathers.

In her research, Austin looked into three different possibilities as to why the penguins were not molting properly.

The condition could be hereditary, the penguins not getting proper nutrition, or the timing of the molt being disrupted because they did not have the same cues as in the wild.

The conclusion to her research included a recommendation to all aquariums and zoos with penguins: pay close attention to the penguin’s weight before they molt and supplement their diet if needed.

Andrew Stoeher, assistant professor of biology, is Austin’s thesis advisor. He recalled her love for penguins and her determination.

“She really went out on her own to get this internship,” he said. “My role has just been largely been  helping her with small details with writing her thesis, but she has been pretty independent with that project.”

Austin became interested in science in high school and then decided to pursue a biology degree because of her interest in medicine.

Initially, Austin came to       Butler with a pre-med track. Now, she is planning on going to the Indiana University’s Robert H. McKinney School of Law. ++

Austin is being awarded the Butler Law Scholar scholarship, making her the first Butler Law Scholar. Half of her tuition at IU will be covered, and she will also receive experiential learning opportunity, either in the form of an externship or as a paid research assistant.

Austin said she aspires to be an administrator at a hospital one day, because she wants to help people.

Her favorite quote is by Barbara Bush, who said, “Some people give time, others money, some their skills and connections, some literally give their life’s blood. But everyone has something to give.”

“I love this quote because I think it really speaks for the medical community,” Austin said. “I want to be a part of it to give my ‘something’ to the world.”

Austin’s role model is her mom, who was also a Butler student. “She is the true embodiment of hard work,” Austin said.

Austin’s mother had brain surgery while she was a pharmacy student here, but never missed a semester of school.

“She is my number one role model, because she knows how important hard work is when to comes to being passionate about something. She didn’t let brain surgery get in the way of her education,” she said.

Another one of Austin’s role models is her honors FYS professor Jason Lantzer.

“He is very passionate about the Civil War and all of the history that comes with it,” she said. “He has written books and dedicated tons of his time to it. It makes me want to work hard for what I am passionate for as well— he is just a very good example.”

Lantzer said Austin is a good example for current and future members of the Honors Program. He was also Carah’s faculty advisor when she joined the service fraternity Alpha Phi Omega.

“In many ways she is directly responsible for the vibrant chapter we have on campus today,” Lantzer said.

He said he is pleased with her academic success and feels she represented Butler well.

“I am proud of the student she has become, and confident that she is going to do an awesome job at IU next year as she starts graduate work (and law school too),” Lantzer said. “She is the kind of student that we hope to both attract and graduate here at Butler.”