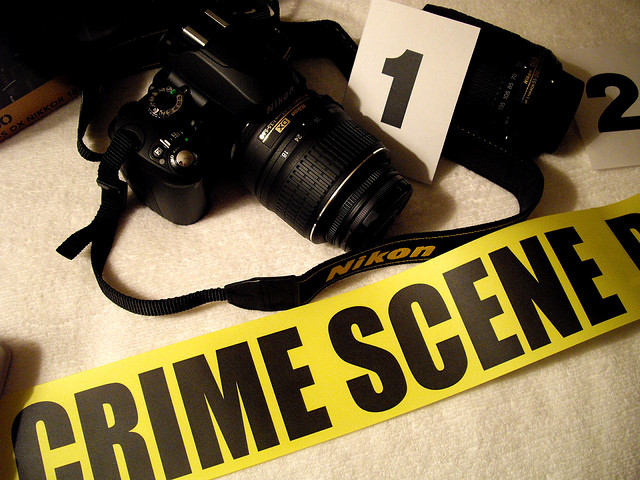 Junior pharmacy major Jarred Daugherty left a pair of headphones sitting in a classroom in Jordan Hall. When he came back later to look for them, they were gone.

Within a matter of minutes, he had become a victim of theft.

Fifteen thefts have been reported since Sept. 17, according to BUPD crime logs. However, thieves might want to think again before stealing something from an on-campus location. Over 100 surveillance cameras on campus could be watching at any second.

Bill Weber, assistant chief of police at Butler University, said that the goal is to have cameras in high-traffic areas where students congregate. These areas include outside of Atherton Union, outside of the Health and Recreation Complex, and outside of academic buildings such as Jordan Hall.

Nineteen security cameras will also be added to Hinkle Fieldhouse this week.

These screens in the campus police department monitor over 100 locations on campus.

Even with these measures of security, Weber said students, faculty and staff must remain vigilant in watching their belongings.

“There’s no cameras inside the (academic) buildings to look into what a student may or may not be doing in a classroom or a hallway,” Weber said.

Weber did note that there are cameras monitoring the computer labs and the office of student accounts in Jordan Hall.

With a finite number of security cameras available, Weber said it is up to human eyes to catch wrongdoing.

He said that there are a number of “extra sets of eyes” that look out for belongings—namely, those of patrol officers who secure buildings and classrooms at night.

However, with limited officers and the 24/7 access students have to buildings across campus, there are plenty of ways for theft to occur.

All academic buildings lock at 10 p.m. Some of these buildings can only be opened by manual key, while others can be accessed by students who have been granted access via their student ID.

These scan cards register when the student enters the building. It is not registered for how long a student is in the building or when he or she leaves. The only way such activity can be monitored is by the patrol officers who lock classrooms at night.

“A lot of it is plain old dumb luck, that the policeman happened to be in the right place at the right time, to happen to see you decide to walk out with a MacBook,” Weber said.

He said that “even one theft is too many,” and urged students, staff and faculty to lock their doors when leaving valuables inside a room or residence hall. He acknowledged that some individuals have bad intentions and will pounce on any opportunity.

“It is great that everybody feels comfortable on this campus,” he said. “I love this place and I am comfortable here and feel very safe here. However, there are some people who do have ill intent, and they think, ‘I need that iPad more than you.’”

Junior Drew Nixon, political science and psychology double-major, said he has had a positive experience with the security of belongings on campus.

“I actually left my laptop in a classroom one day, totally forgot about it, went back eight hours later and it was still there,” he said. “I like to say it is the ‘Butler Community of Care.’”

However, he recognizes that not everyone will be as fortunate as he was.

“But I do know there is always a possibility that someone from Butler or outside of Butler could come in and possibly access those buildings and take those things,” he said.

Nixon said he feels that cameras in the hallways of academic buildings would be a deterrent for would-be wrongdoers.

Junior Rachel Hahn said she tends to value privacy. However, she said she would have to remove her emotions in order to determine whether or not the pros of the extra security would outweigh the cons.

“Once I put my emotions aside and weigh costs and benefits, my answer may change about whether or not I think it is a good idea or not,” she said.

Hahn, a second-year resident assistant in Residential College, said she feels safe on campus. However, she said that feeling can lead to trouble for those who do not take the necessary precautions.

“I think it is a very safe campus,” Hahn said. “But I think with the whole concept of the ‘Butler bubble,’ we forget that there is a world outside of here. I think students do need to be more aware of that than they are, because it does feel extraordinarily safe.”

“I would love to have a gazillion video cameras on campus,” he said. “In buildings, hallways, you name it, I would love to see every inch of this campus and the surrounding area blanketed by cameras.”

There have been approximately 40 cameras added to campus within the last calendar year.

However, there, with that desire, comes a cost—quite literally.

“Everything comes with a cost,” Weber said. “The university has so many needs. Faculty members want to see their programs expanded, there’s staff people who want money, so everyone is going to the president with their hand out.”

He said that cameras greatly increase the likelihood a stolen item can be recovered. For example, if a student reported an incident in Atherton Union at 1 p.m. on a Thursday afternoon, BUPD could go watch the film from that time and attempt to identify details.

“Before, you reported the crime but weren’t able to provide a description,” he said. “But we (would be able) to take the forensic evidence with these cameras and begin working on something.”

“I think in a public space it might be acceptable, but I am not sure it is necessary,” she said. “The desk is open during all key times, so it would only be late at night that it would only give new information.”