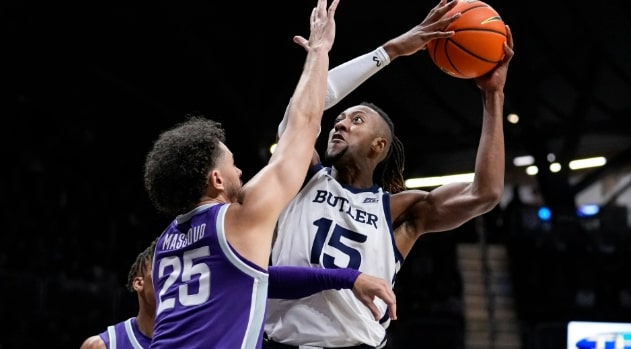 Graduate center Manny Bates earned his third double-double of the season in a 76-64 win over Kansas State on Nov. 30. Photo courtesy of AP Photo/Michael Conroy.

The Butler Bulldogs handed the Kansas State Wildcats their first loss of the season with a 76-64 victory on Nov. 30. Butler is now 5-3 on the season with three more non-conference games left to play before Big East play begins.

Kansas State was led by an impressive performance from senior Keyontae Johnson. Despite five turnovers, Johnson was extremely efficient on offense. He didn’t miss a shot — 9-9 from the field — and finished with 20 points and 12 rebounds. Johnson’s fellow seniors, Desi Sills and Markquis Nowell, contributed 17 points and 13 points, respectively.

Let’s go beyond the box score to unpack a quality win at home for the Dawgs.

For the second game in a row, sophomore forward D.J. Hughes was ruled out — meaning that Butler had only eight active players. Minutes before the game, it was announced that junior forward Myles Wilmoth would dress for the game. Wilmoth ultimately did not see the floor, which meant that the starters continued to play huge minutes.

Of the 1600 minutes that have been played this season, the starters are averaging 81% of the playing time. Lukosius, Harris, and Hunter Jr. all have had one game where they played all 40 minutes. Bates came very close to that against the Wildcats, logging a season-high 39 minutes in the win. He acknowledged the minutes were a lot, but says he’s just grateful to be on the court.

“I’m a little tired, not gonna lie,” Bates said. “A little tired but it always feels good to be out there, fully healthy, just playing the game I love. It’s the best thing in the world.”

Regardless of the minutes, the production from the Bulldog starters has continued to carry this team. 89% of Butler’s points this season have come from the combined effort of Hunter Jr., Harris, Taylor, Lukosius and Bates. While this stat may seem a little alarming, the fact that we haven’t seen this team at full health means that the ceiling for this team is still quite high.

Details in the defense

Overall, the Bulldogs’ defense was able to keep the Wildcats in check. Kansas State shot 46% from the field and only 20% from beyond the arc — the Wildcats were a bad three-point shooting team coming into this game though to be fair.

One stat that did lean in the Wildcats’ favor, however, was points in the paint. Kansas State outscored Butler 48-34 down low. Johnson was able to get whatever he wanted in the paint, which opened up a lot of opportunities for the ball to find a cutting Wildcat when help came over.

Even with all the points down low, the Wildcats only went to the foul line three times the entire game. Defending with fouling is something the Bulldogs have done well for most of this season, especially in wins. Head coach Thad Matta stressed how important it will be to continue the trend.

“That’s something we’re trying to pride ourselves on is not fouling,” Matta said. “We want to be in position and not reaching out, slapping… just not committing foolish fouls and we did a good job of that tonight.”

Butler’s next game will be at Hinkle on Dec. 3 against the Tennessee Tech Golden Eagles. Butler will look to maintain their winning ways at home, as the Bulldogs have yet to lose in Hinkle this season. The Dawgs have also won 68 of their last 70 home games versus non-conference opponents.