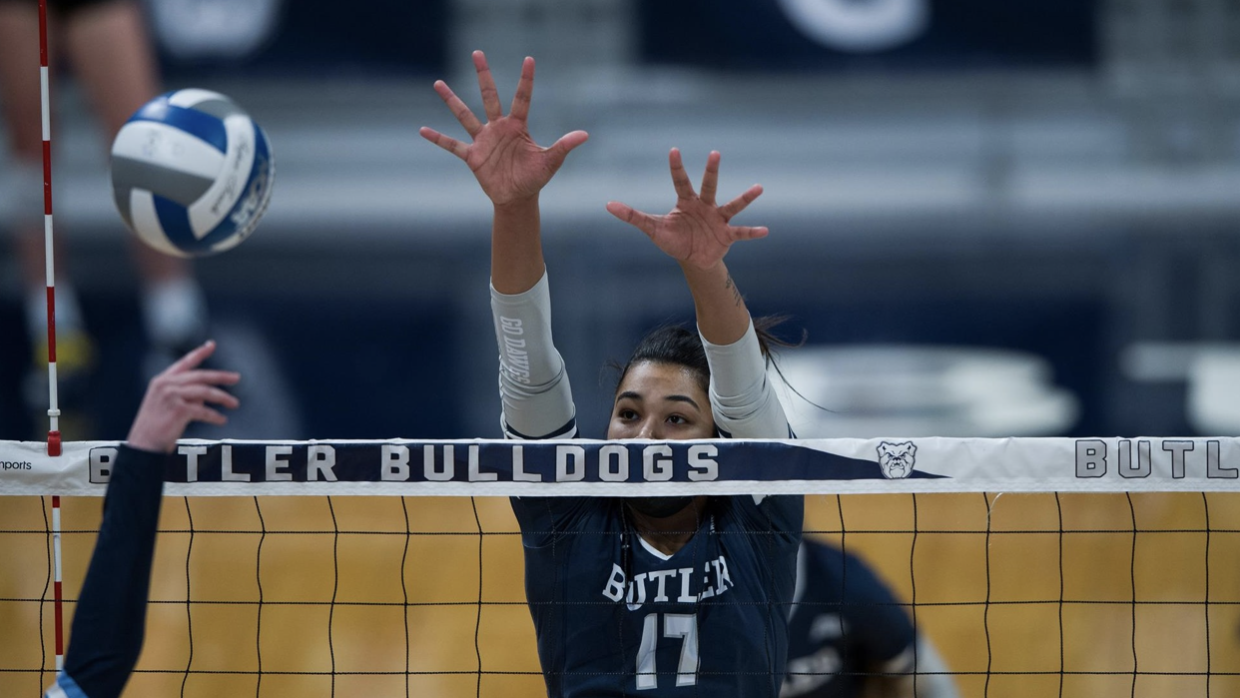 Sophomore Amina Shackelford goes up for a block at the net. Photo courtesy of butlersports.com.

Butler volleyball snapped their four-game losing streak with a victory against Providence on Saturday, Sept. 25. The team hit a .295 for its second-best hitting percentage this season.

The Bulldogs began the first set with a comfortable 10-7 lead with three kills from redshirt senior Melody Davidson and one kill each by redshirt junior Brittany Robinson, sophomore Amina Shackelford, and sophomore Elana Brueggemann. A 21-15 lead was created by a 4-0 run with kills by Davidson and first-year Mariah Grunze. Butler clinched the set with Davidson leading with six kills, Grunze with four and Robinson with three. Junior Jaymeson Kinley contributed seven digs in the opening set.

The Bulldogs began the second set strong with an early service ace by Kinley. Kills by Grunze, Robinson, and Shackelford allowed Butler to establish a 8-2 lead. Later in the set, Providence reached within one point of the lead, but Davidson scored three consecutive Butler points for a 23-20 lead before Grunze finished the set with her fifth kill.

Grunze began the third set with four early kills, giving the Bulldogs a 7-4 lead. Throughout the set, Providence would lead 12-11, 17-14, and 22-19. Butler had to fight back with a 6-0 run to win the set 25-22. Kills from sophomores Marissa McKelvey, Shackelford and Robinson aided in the effort. Grunze led Butler’s offense with six kills in the final set, Robinson added four and Kinley had 10 digs for the defense.

McKelvey managed the offense throughout the match with 45 assists, nine digs, two block assists and a kill. Grunze led the way with 15 kills and added 11 digs and two block assists. Robinson was right behind her with 11 kills, one solo block, three block assists, two digs, and an ace.

The team will travel to Washington D.C. on Oct. 1 to face Georgetown at 5 p.m. and then Pennsylvania on Saturday to play against Villanova at 7 p.m.