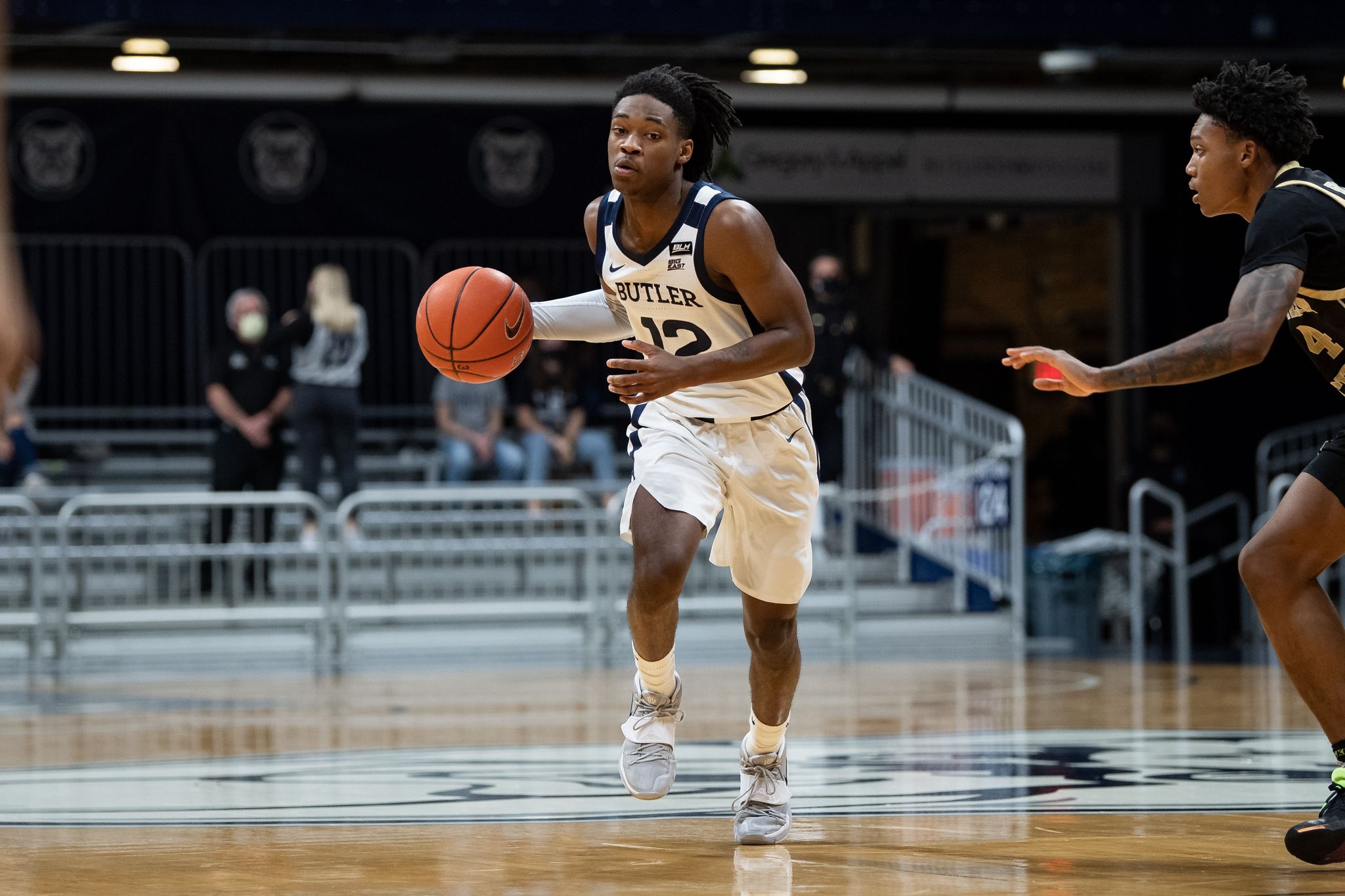 Myles Tate drives to the rim in the season opener against Western Michigan. Tate scored a career-high 10 points in the loss to Indiana. Photo by Zach Bolinger.

Despite leading at the halftime break, the Butler men’s basketball team shot just 26 percent from the field in the second half and subsequently fell to Indiana 68-60 as part of the annual Crossroads Classic. Injured starting point guard Aaron Thompson did not play against the Hoosiers. Here’s what we learned from the Bulldogs’ second loss of the season.

1. Butler struggled mightily in the paint

Indiana came into Saturday’s game with Butler sporting top-50 ranks in the country in field goal percentage allowed, 3-point percentage allowed and blocks. It was clear from the opening tip that the Hoosiers calling card was their defense, and it impressed yet again. Indiana blocked a total of 8 shots in the contest, with five coming from All-Big Ten forward Trayce Jackson-Davis. The Hoosiers rim protection made it very difficult on Butler to get easy shots to fall at the rim, with many of Indiana’s blocks remaining in play and igniting the fast break.

In the first half, this inability to get easy buckets was not a problem for Butler as they were able to knock down 5 of 7 3-pointers in the first half to help the Bulldogs to a five-point halftime advantage. In the second half, however, that shooting touch was not there for Butler as they regressed to a 4-for-12 clip in the final 20 minutes. Every team in the country is going to have spells where outside shots aren’t falling, but great offensive teams are able to supplement that scoring by getting easy baskets in the middle. Bryce Golden and Bryce Nze combined to shoot 6-for-24 in Saturday’s game, which is simply not good enough for Butler to compete against NCAA Tournament-quality teams like Indiana.

We came into the year knowing that this team was going to be young and largely inexperienced at the collegiate level, but it was yet to be seen how quickly the freshmen would be able to come and acclimate their games to the next level. While only three games into the season, Butler’s freshman group of Chuck Harris, Myles Tate, JaKobe Coles and Myles Wilmoth have exceed the expectations Butler fans had for them coming into the season. The play of the young Bulldogs was one of the main reasons they held a halftime advantage. Tate led all Butler players with 10 points heading into the locker room while Coles was next best with seven.

While “freshmen mistakes” were just as easily found as highlight plays, it is encouraging to see Butler’s young studs to not be afraid of the spotlight. Many freshmen around the country may shy from playing in an NBA arena against a quality team in Indiana, but this group collectively has shown they have the confidence to step in right away and learn on the fly. While those growing pains may be frustrating at first, this experience will pay big dividends in the years to come for Butler.

3. Butler proved it can compete with Tournament-quality teams

The Butler program over the years has made winning an expectation, which makes losses against even the best teams in the country disappointing, but it’s important to take into consideration the quality of teams this Butler team has played through the first three games and the circumstances in which they played them. Villanova and Indiana are No. 4 and No. 17 respectively in Ken Pomeroy’s ratings, and are both very likely to hear their name called on Selection Sunday. They played these games all the while they are less than a week removed from a 20-day pause in which some of the players were quarantining and in different places from a health perspective.

Assuming the program remains COVID-free, the team will play more cohesively as they are able to stack more practices and games together and get in better shape. It is worth noting that Coach Jordan mentioned fatigue in the postgame presser. Some of the poor performance in the second half against Indiana could very well be attributed to a tired group.

It never feels good losing to an in-state rival like Indiana, and it especially does not feel good to lose a halftime lead on this type of stage. However, the first half showed just how bright the future is for this group. The freshmen have played well above expectations and Nze and Golden have much better games ahead of them. Once Thompson returns to the fold and players get game-ready legs underneath them, this team has the skill and energy to compete in the Big East conference. With Southern Illinois ahead on Monday, Butler has a good chance to gain confidence against an opponent they should beat and take that momentum forward into the rest of Big East play.