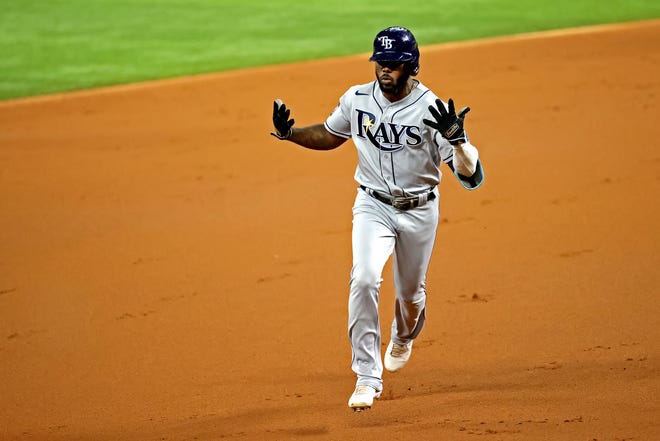 Tampa Bay rookie takes the baseball world by storm with his explosion on offense during the 2020 postseason.

Tampa Bay Rays’ outfielder Randy Arozarena’s breakout performance in the 2020 MLB playoffs could be the greatest postseason run of all time and could jumpstart the 25-year-old Cuban’s potential superstar career.

A rookie with these types of numbers is spectacular, but especially since Arozarena accomplished these feats on the biggest stage in baseball.

Despite the Rays’ loss to the Los Angeles Dodgers in the 2020 World Series, Arozarena was undoubtedly the biggest story of this year’s MLB postseason. He carried the Rays’ offense through the postseason, leading his team in almost every batting statistic.

He spent the first two years of his professional career in his home country of Cuba with the Vegueros de Pinar del Río of the Cuban National Series. Arozarena then moved to Mexico, where he had stints in three different leagues.

After six years of playing professionally, Arozarena made his major league debut for the Cardinals on Aug. 14, 2019. In his 19 games with St. Louis, Arozarena batted .300 with an unspectacular one home run and two RBIs. His time in St. Louis would not last long, however, as he was traded to the Rays on Jan. 9, 2020 in a four-player deal.

During the 60-game 2020 season, Arozarena played in just 20 games as a utility player during the regular season, hitting .281, but broke out in the power department with seven home runs and 11 RBIs, showing glimpses of stardom.

In the postseason, the rookie flipped a switch. Arozarena was previously an unknown player, but quickly became a household name, hitting for a .377 average with 10 home runs and 14 RBIs.

Arozarena’s explosion catapulted the small-market Rays into the World Series; he dominated pitchers in every series. In the ALCS against the Houston Astros, he hit four home runs, including one in Game 7 to seal the Rays’ trip to the Fall Classic.

While no player has ever done something like this before, Arozarena’s breakout especially came as a surprise as a rookie. Arozarena came out of nowhere and immediately became the leading force behind an entire team’s offense. The Rays could not have advanced to where they did without his bat in the lineup.

Moving forward, Arozarena has the potential to become one of the great baseball players of his time. He now holds the records for almost every major postseason hitting stat such as home runs, total bases and hits, surpassing all-time greats Derek Jeter and Barry Bonds.

Arozarena has proved the momentum he created during this playoff run was not a fluke. He is putting up these impressive stats in front of millions watching. Sometimes, players struggle to play well in the postseason because the pressure eats at them, but Arozarena thrived in big situations.

In Game 1 of the ALDS, Arozarena hit a home run off New York Yankees’ ace Gerrit Cole, possibly the best pitcher in baseball. The Yankees went on to win 9-3, but the blast was a testament of what may come in the future for Arozarena.

Some may tag Arozarena as a one-hit wonder — take Evan Longoria, former Tampa Bay Ray, who had a similarly impressive playoff run as a rookie. Longoria previously held the team record of six career home runs in the postseason, which Arozarena just shattered in just one year’s run.

While Arozarena is already a legend for breaking the postseason record for home runs and hits in a single postseason, he is going to want to build off this performance as the most-feared hitter in the Rays’ lineup next season.

If he can keep this type of performance up for a full 162-game season, Arozarena would solidify himself as one of the best players in today’s game. Expect him to shock the world next season, as he tries to lead the Rays back to the World Series.