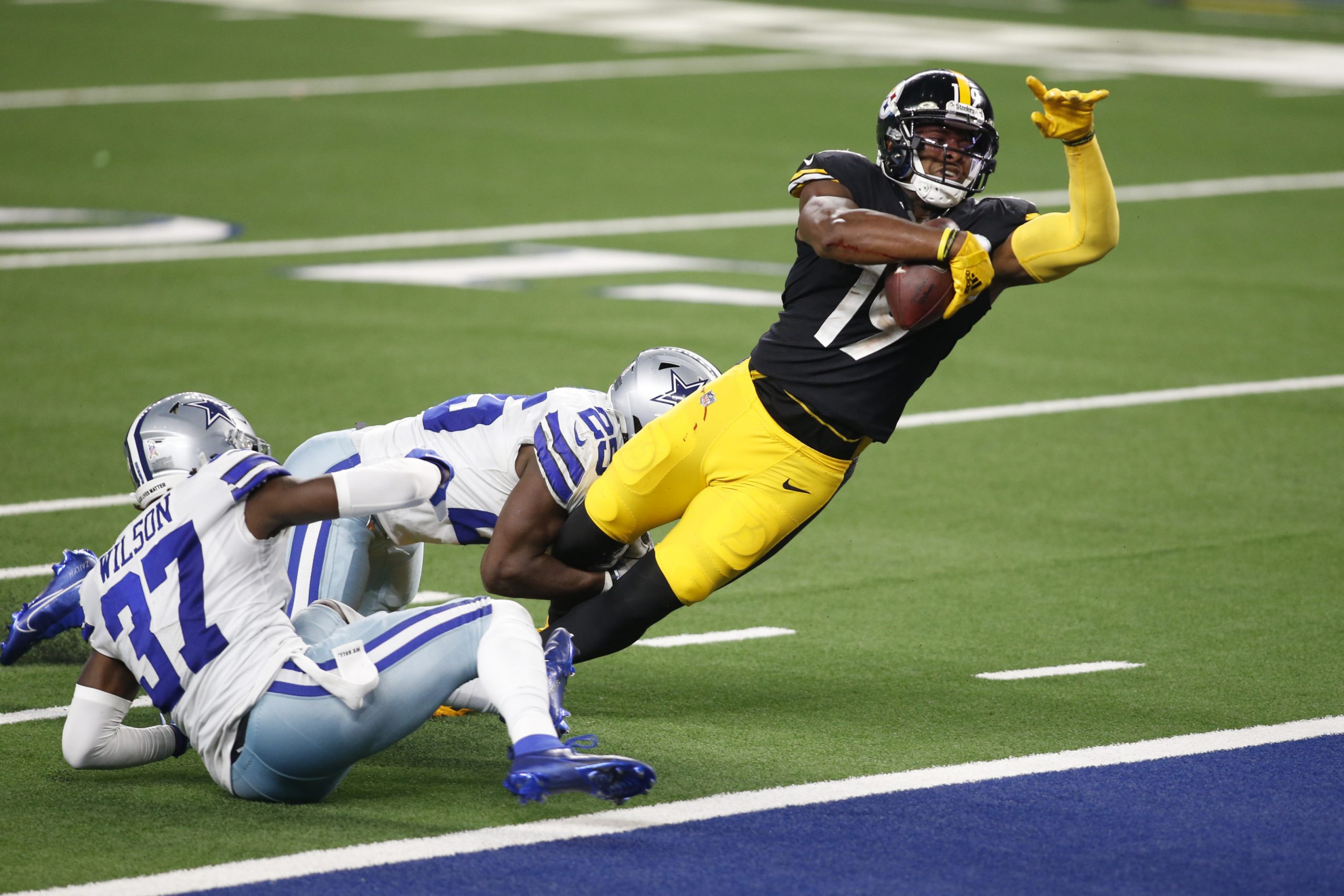 JuJu Smith-Schuster lunges for the goal line in Sunday’s 24-19 win over the Dallas Cowboys. The Steelers remain as the only unbeaten team in the NFL. Photo courtesy of Still Curtain.

The 2020 NFL season has been a wild ride thus far. Many teams are playing in fanless stadiums, and COVID-19 caused the NFL to have Tuesday Night Football for just the second time since 1946. The Patriots are below .500, the Browns are looking like a playoff team and the Bills are genuine contenders. It is safe to say this season has been one of the NFL’s strangest, but the football has been generally good — as long as you aren’t watching the Jets or anyone in the NFC East.

As the NFL season moves past its halfway mark, the teams that will be battling it out in January are becoming increasingly clear. Similarly, the teams that will be picking at the top of the draft next spring are starting their own battle over superstar collegiate quarterbacks Trevor Lawrence and Justin Fields. Since there is still a lot of football to be played, here are my tiers of teams you should be watching and paying attention to, and teams that you can forget about until the 2021 NFL Draft.

Josh Allen and the Buffalo Bills had a statement victory versus the Seahawks over the weekend, and staked their claim as one of the best teams in the league. Their defense caused MVP-favorite Russell Wilson to turn the ball over four times, and Josh Allen aired it out for over 400 yards and three touchdowns, adding one on the ground. As well as they have played, they got clobbered by the Titans in the aforementioned Tuesday Night Football game, and lost convincingly to the Chiefs. Until Buffalo can prove it against the AFC’s best, they shouldn’t be considered a true contender.

At their best, the Titans look like the same team that went to the AFC Championship game last year. Derrick Henry is still the most dominant runner in the league, and Ryan Tannehill has been better this season than he was last season. The difference is the Titans defense, which, quietly, has been one of the worst in the league. They have allowed 30 plus points four times in eight games, to some of the worst teams in the league — Jaguars, Vikings, Texans and Bengals. That simply won’t cut it against the Chiefs, not to mention the other top AFC teams.

The Steelers are the only undefeated team left in the league, but it hasn’t exactly been pretty. Their most recent win was a one-score game over the Cowboys, who were starting their fourth different starting quarterback this season, Garrett Gilbert. In defense of the Steelers , they were coming off two extremely tough wins over the Titans and Ravens. The Steelers didn’t prove in either game that they were definitively better than their opponent, but they were wins regardless. The Steelers do have an easy remaining schedule, with their next true test coming on Thanksgiving versus the Ravens.

The Ravens pulled off a classic win over the Colts, managing the clock and running the ball down their throats. Although all eyes are on Lamar Jackson, the Ravens defense has been one of the best in the league, and became even better when they acquired Yannick Ngakoue from the Vikings. The Ravens two losses were to the Steelers and the Chiefs, two teams they will likely have to beat to go to the Super Bowl. If anyone has the talent on both sides of the ball to win those games, it’s the Ravens. It is just a matter of if Lamar Jackson can get it done when it matters most.

If Russell Wilson isn’t on his way to capture the MVP trophy, then he’s at the very least on his way to receive his first-ever MVP vote. He has been remarkable, and DK Metcalf looks like a roided-up Calvin Johnson in the best way possible. Despite their explosive offense, the defense has been keeping the games close. The Seahawks are currently on pace to shatter the NFL record for yards allowed in a season, and they are allowing 30.4 points per game. The lowest point total they have allowed all season was 23 against the Dolphins, and they most recently gave up 44 to the Bills, the most points allowed in the Pete Carroll era. Either the defense needs to step up, or Russ needs to find a way to average 50 in the playoffs.

In week one, the Saints ruined Tom Brady’s Bucs debut, and on Sunday Night Football, the Saints did it again after jumping out to a 31-0 halftime lead, and became the first divisional opponent to sweep Brady in his 19 years as a starting quarterback. This win for the Saints puts them in the driver’s seat to grab the No. 1 seed in the NFC, which will give them the only bye week and home-field advantage throughout the NFC playoffs. However, let’s not forget that once the playoffs start, the Saints start blowing leads like their division rival Falcons do.

Don’t let Sunday’s loss fool you, the Buccaneers are still a contender. They boast a great run-defense, an aging GOAT at quarterback, and they recently signed Antonio Brown, who, despite his problematic past, still holds the NFL record for the most consecutive seasons with 100 plus catches — six — and is one of the most talented receivers ever. They need time to fit all of their talented pieces together on offense, but their 38-10 victory over the Packers shows how good they can be. If they can’t figure out how to beat the Saints, Brady will have a tough time winning ring number seven. Also, do not sleep on the Packers, who have a good shot at home-field advantage in the NFC playoffs due to their Week three win over the Saints. If the road to the Super Bowl goes through Lambeau, Aaron Rodgers and the Packers have as good a shot as anyone.

It is certainly odd to consider the Dolphins, Raiders, Browns and Cardinals as contenders for the playoffs — the four teams have made the playoffs a combined seven times since 2003, four of which belong to the Cards. Despite their recent stretch at the bottom of the league, all four teams are genuine playoff contenders. The Dolphins have been one of the hottest teams in the league, and have been competitive even in their losses, dropping only one game by double digits. Tua Tagovailoa proved against Arizona that their ceiling is even higher than it was with Fitz-magic. The Browns have not looked great in their past three games, and the loss of Odell Beckham Jr. will likely hurt their chances to wreak havoc in the playoffs. But, the Browns are still on track to compete for their first playoff appearance since 2002, which should be good enough for long suffering Cleveland fans. The Colts defense has been stellar, but Phillip Rivers is struggling to throw the ball further than a checkdown. The Raiders have been able to pull off two huge wins over the Chiefs and the Saints, and with a relatively easy schedule the rest of the way, could sneak into one of three AFC wild card spots.

The Eagles have lost more games than they’ve won, yet they are in the driver’s seat to win the NFC East and host a playoff game. They will likely be able to do that even if they finish with a losing record, but let’s not pretend like the Eagles are good. The team has been decimated by injuries, from their offensive line to skill positions to the defense, no one has been able to stay healthy. Wentz’s league-leading 12 picks don’t help either.

The Vikings and the Bears have had polar opposite seasons. The Bears got off to a hot start with Mitch Trubisky, but since moving to former Super Bowl MVP Nick Foles as the starting quarterback, they are just 2-4. The Vikings got off to a dreadful 1-5 start, but have won their last two games against divisional opponents. The two teams meet on Monday Night Football on Nov. 15, and that game has the potential to eliminate the Vikings or put them into a position to sneak into the playoffs.

The Cardinals offense has been elite, and it’s clear that Kyler Murray made the right decision to be an NFL quarterback over an MLB outfielder. Their defense has been better than expected as well, but they have had one of the easiest schedules, having only played one contending team so far (OT Win vs. Seattle). The Rams have had inconsistent results yet share the same record as the Cardinals, and the two teams still meet twice in their last eight games. Those games will decide which team makes the playoffs, but with the playoffs expanded to seven teams, both teams could still make it in.

The Chiefs are the best team in the league. Patrick Mahomes is the best quarterback, and with the extensive and versatile weapons at his disposal, it takes a lot to beat this offensive juggernaut. Kansas City is poised to be the next Patriots, with a once in a generation coach-quarterback duo. This is not to say they can’t lose; Brady and Belichick failed to win the Super Bowl 14 times together. However, until anyone proves different, the Lombardi trophy goes through Patrick Mahomes.

Not done yet, but dangerously close

Most of these teams are capable of competing with any team in the league, but have come out on the short end of the stick too many times. The 2020 Patriots are certainly not Belichick’s best work, as there isn’t enough talent to support Cam Newton, who clearly no longer has what it takes to carry a team like he did in 2015. The Bengals and the Chargers both have exciting rookie quarterbacks in Joe Burrow and Justin Herbert, respectively, that look poised to succeed in the league for a long time. Unfortunately, both teams have bad defenses that keep them from winning more games than their play warrants. The Broncos have been the definition of mediocre, and that’s not going to get you to the playoffs in the same division as the Chiefs.

The Giants, Cowboys and Washington in normal circumstances would not be contending for anything, but because they play in the NFC East, each team could propel into the playoffs with an abysmal record, simply by beating the Eagles and their other division rivals. The Falcons continue to blow leads at an unprecedented rate, giving them little hope at the playoffs. The Panthers and the Lions have been a tough out for everyone they’ve played, but haven’t won enough to stay competitive in the playoff race. The reigning NFC champion 49ers have been struck hard with the injury bug, losing George Kittle for the season, in addition to Jimmy Garroppolo and Raheem Mostert for long stretches. That, coupled with the gauntlet that is the NFC West, puts the 49ers in a tough spot to even make the playoffs again.

See you at the Draft

These teams have no realistic shot at the playoffs or even winning games besides against each other, so no need to spend any more time on them.