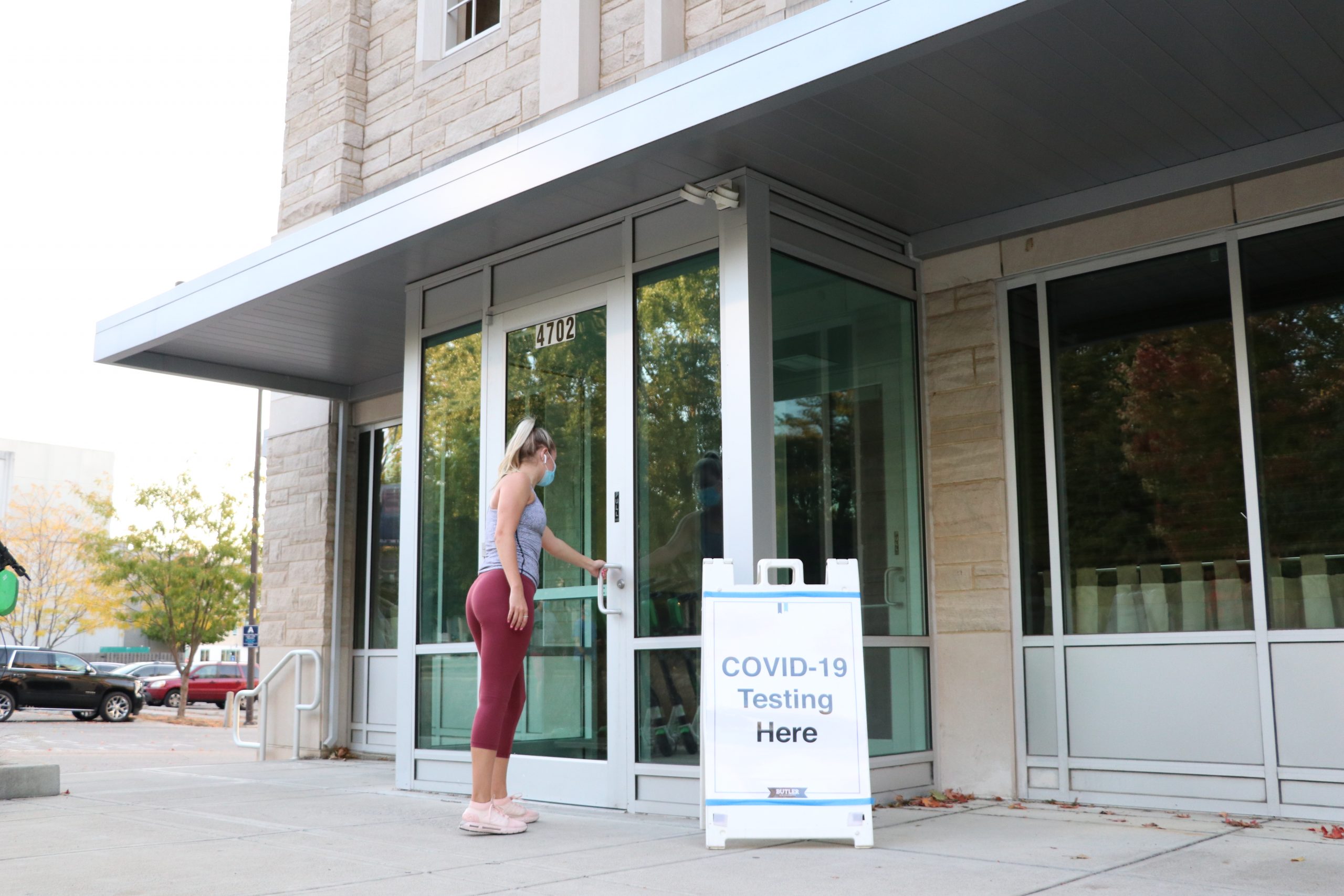 Students are now being tested for COVID-19 at the former site of Metro Diner. Photo by Blake von der Lippe.

While there was not a singular instance that caused the sudden spike last week, there was a small, local outbreak on one of Butler’s athletic teams. Brent Rockwood, vice president and chief of staff, explained that the university’s contact tracing and testing efforts were able to identify the outbreak early on, find who was at risk and properly isolate or quarantine those individuals.

Initially, the university, in conjunction with a faculty member from the College of Pharmacy and Health Sciences, designed a scientific study to distribute a random sampling of tests to find the general positivity rate in the community.

Originally, on-campus testing occurred at Hinkle Fieldhouse. Now that athletics have resumed some of their activities, the university has given that space back to them, thus establishing a new testing location on the southeast corner of the Sunset Avenue parking garage — the space previously occupied by Metro Diner.

Even though Butler has been able to remain open for in-person learning this far into the semester, Rockwood said it is going to take an enhanced commitment following the guidelines to ensure that everyone can stay on campus until Thanksgiving break.

“My perspective is that I am cautiously optimistic,” Rockwood said. “One thing I want to convey is hats-off to the students. The students have done a fantastic job and our Butler community has risen to the challenge of putting us in a very good spot. We are more than halfway through the semester now and we are in a reasonably good spot in terms of not eliminating the virus, that is impossible, but mitigating it and controlling it and continuing our core nature of what we do as an institution of higher education.”

Chemistry professor Anne Wilson explained that while it is human nature to want to gather together and relax the rules after weeks of successful results, everyone on campus needs to double their efforts and continue working hard to keep each other healthy.

“We know that students learn best with face-to-face hands-on experiences and that e-learning for students of all ages can be challenging,” Wilson said. “Especially in college where so much of it is the interpersonal relationships. Group work is so much easier when you are together as people. That is why I encourage people to mask up and keep in this.”

Rockwood said there are four main things all students need to continue doing to help manage the spread of COVID-19: fill out the daily health check truthfully, wear a mask indoors and outdoors, social distance while limiting the size of groups to under 10 people and wash your hands frequently. Rockwood said that with the weather getting colder, the flu season approaching and people beginning to aggregate indoors rather than outside, it is important the campus community does not get complacent.

“If we are all committed to those four things, we will greatly increase our chances of completing the in-person semester,” Rockwood said. “My message to the students is keep up the great work. We are almost there.”

Shannon Mitchel, a junior creative media and entertainment and theater double major, said she has seen most students following the rules and adhering to the university’s guidelines. In the next couple of weeks, she hopes students will continue to try and keep themselves and each other healthy.

“I think the Butler community is one that might take this problem more seriously than some,” Mitchel said. “I think that with the weather getting colder that it is probably going to be a little bit more of a problem. Thankfully, we have become so accommodating with anyone who is experiencing any sort of illness so hopefully if people start to feel sick in any way, whether it is COVID symptoms or literally anything, that hopefully they will do the right thing and stay home. I hope with Zoom always being offered and available for classes, that will keep cases down.”

Therefore, as Rockwood said, with a conscientious effort to follow the guidelines and use of the university’s contact tracing and testing resources, students have a greater chance of continuing with in-person classes for the second half of this fall semester.